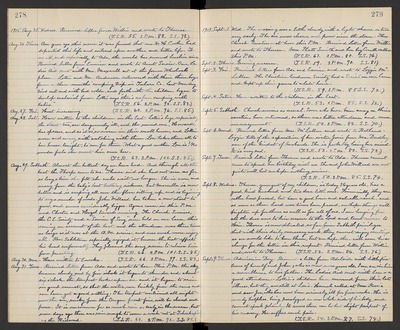 Aug. 26. Thurs. One year ago this morn it was found that our W.H. Cooke had departed this life and entered upon another and better life. To us all, and especially to Ada, the world has seemed lonelier since. Received letter from Eunice and wrote to Aunt Susie. Our Ladies Aid met with Mrs. Maxwell out at the former Wheelock place. Lottie and Mr. Anderson returned with their three boys from a three months camping trip in Tulare Co. last Monday, tired out and with bad colds and forth with the children began to develop malarial fever. Lottie says "there's no fun camping with babies." (T.S.R. 56. 2 P.M. 92. S.S. 82.)

Aug. 28. Sat. Have written to the children in the East. Lottie's boys, especially the oldest two, are dangerously ill, and the second one, Howard, has spasms, and as it is so warm in their small house, and Lottie worn and weary with watching with them, Lou takes them all to her house tonight, to care for them. What a good mother Lou is! No wonder feels she must live near her. (T.S.R. 63. 2 P.M. 100. S.S. 85.)

Aug. 29. Sabbath. Almost the hottest day we have had. And though all the heat the Thorps came to us. Theresa said she had not seen no for so long a time she felt she could wait no longer. She is worn and weary from the baby's last teething sickness, but Marcella is now better and is creeping all over the floor sitting up, and is beginning to say a number of words. John Willard has taken a new start to grow, and seems considerably bigger. Agnes came in this P.M. and Chester and Hazel towards evening. The Church Services, the C.E. Society and a "Service of Song" were held on our lawn this evening on account of the heat, and the attendance was three times as large as it was at the A.M. service, and was much more enjoyable. Rev. Sahlstrom especially enjoyed it, because the heat effects his head unfavorably. They planned the song service to relieve him from preaching. (T.S.R. 66. 2 P.M. 101. S.S. 85.)

Aug. 31. Tues. Received letter from Ada wrote to her. This P.M. the sky because cloudy and by four o'clock it began to thunder and about six o'clock the tempest broke upon us and it began to rain in good earnest, so that the water ran briskly from the caves and our lawn got a good witting. The tempest continued all night now the air, smoky from the Oregon forest fires, will be cleared and purer. It is uncommon for so much rain so early in the season, but some days ago there was rain enough to cause a wash out at Tehachapi on the Railroad. (T.S.R. 63. 2 P.M. 92. S.S. 81.)

Sept. 6. Mond. Received letter from Mrs. McLellan and wrote to Portland. Lizzie tells of the separation of her sister Josie from Mr. Dudley one of the kindest of husbands. She is probably losing her mind. It is very sad. (T.S.R. 52. 2 P.M. 82. S.S. 72.)

Sept. 8. Wednes. Theresa, youngest of my children, is today 36 years old, has a good, kind husband and two dear little ones. Financially they are rather hard pressed, but have a good home and valuable ranch, and as soon as these hard war times have passed, we hope things will brighten up for them as well as for all of us. I am longing for all the dear ones to this nearer to the Lord and trust more to Him. Theresa is now situated so far from Sabbath privileges that with their daily necessary work, they cannot enjoy meetings as we would like to have them, but we hope there will soon be a change for the better in this respect. Received letter from Willie and wrote to Theresa. (T.S.R. 52. 2 P.M. 86. S.S. 76.)

Sept. 9. Thurs. Admission Day. Received a letter from Adelaide with little pictures of herself and John, who is now seven years old. I can see in him a resemblance to his father. The Ladies Aid met with Lou a good attendance. Lottie's children have recovered from their late illness, but they are still at Lou's. Hannah called at Mrs. Kerr's and saw Joe, who has now been seriously ill for five weeks. He is nearly helpless, being paralyzed on one whole side of his body and cannot speak plainly. It seems there can be but slight perfect of his recovery. He suffers much pain. (T.S.R. 54. 2 P.M. 87. S.S. 74.)