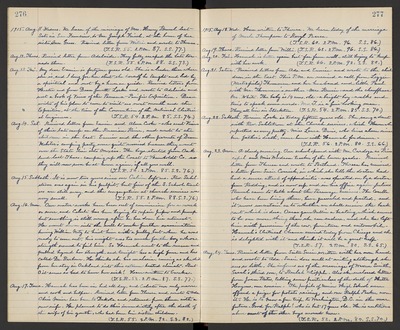 Aug. 13. Fri. My dear Eunice is fortyone years old. She is a leader then where she is, and I long for her that she herself be taught and led by a spiritual and not by a human guide. Received letters from Hester and from Dean Jewett Locke and wrote to Adelaide and sent a book of Veins of the Panama - Pacific Exposition. Dean writes of his plan to come to visit us next month and the Exposition, at the time of the Convention of the National Electric at Engineers. (T.S.R. 54. 2 P.M. 85. S.S. 74.)

Aug. 14. Sat. Received letters from Eunice and Alma Cooke - who sent [?] of their late camp on the Russian River, and wrote to the children in the East. Eunice and the other parents of Dean Webster's camping party, were quite worried because they went over the State line into Mexico. The boys started from Oakland last Thurs. camping up the Const to Humboldt Co. so they will now soon be at home again, if all goes well. (T.S.R. 54. 2 P.M. 85. S.S. 76.)

Aug. 16. Mon. Our water-works have been out of communion for a week or more, and Celeste has been trying to repair pipes and pump but something is still wrong, after he has done his utmost. He went down into the well to make further examination having William Netz to hoist him with a pulley, but when he was ready to come out, his weight was too much for the boy whose strength seemed to fail him. So Hannah went to the rescue and pulled beyond her strength, and tonight has a high fever and has called Dr. Barbour. He thinks she has malaria, coming as she did from her stay in Oakland into this extreme hasted climate. But O it seems so bad to have her sick! Have written to Eureka. (T.S.R. 52. 2 P.M. 87. S.S. 77.)

Aug. 17. Tues. Hannah has been in bed all day, and Celeste our only nurse and cook and helper. Received letter from Theresa and wrote to Ada. Chris Meier has been to Dakota and returned from thence with a new wife. He planned to do this immediately after the death of the wife of his youth, who had born him sixteen children. (T.S.R. 55. 2 P.M. 92. S.S. 82.)

Aug. 23. Mon. A cloudy morning. Our school opened with Mr. Cardoza as Principal and Miss Woodson teacher of the lower grades. Received letter from Theresa and wrote to Portland. Theresa has received a letter from Susie Cornish, in which she tells the doctor had had a severe attack of appendicitis - was operated on by a doctor from Redding, and is now up and in his office again. Julius Bruml came to talk about the Parsonage business. The Corella who have been living there, have quarreled and parted, and it seems uncertain as to whether we shall receive the back rent which is due. Oscar gave Nellie a beating, which seems to be one more thing than she can endure, and she has left him with possession of the cow, furniture and automobile. Hannah's Electrical Cleaner arrived today from Chicago and she is delighted with it and thinks it will be a great help. (T.S.R. 57. 2 P.M. 80. S.S. 65.)

Aug. 24. Tues. Received letter from Sister Susie, written with her own hand and wrote to Ada. Susie does well at writing although she sees so little. She informs us of the marriages of Warren Smith, Sarah's third son, to Beulah Whipple. Also she enclosed letter from Joan Bates, telling some particulars of the death of Hetta Haynes, our cousin. The pupils of Union High School were offered a prize for potato raising, and our Ralph Parker won it. He is to have a free trip to Washington, D.C. in the near future. Good for Ralph! who is but 17 years old. He is ambitious above went of the other boys around here. (T.S.R. 52. 2 P.M. 80. S.S. 70.)