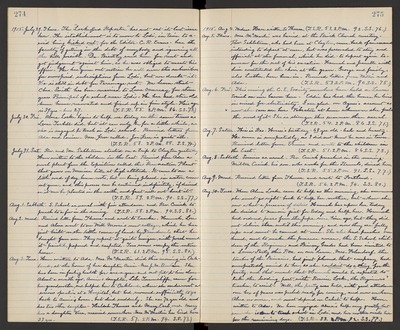 1915. July 29. Thurs. The "Lockeford Reporter" has sent out its last issue here. The establishment is to move to Lodi, in time to avoid being kicked out, for the Editor. C.R. Evans - has the faculty of getting in the debt of everybody and ignoring all the bills possible. Dr. Priestly sued him for rent and got judgment against him, so he was obliged to vacate his office. He has given out notice he will serve the subscribers for unexpired subscriptions from Lodi, but we doubt it. He is still in debt for Parsonage rent. We learn that Chas. Smith has been married to Lina Murray, for three years Principal of a school near Lodi. He was had the old home house renovated and fixed up in fine style. His age is 39 yrs, her 27. (T.S.R. 55. 2 P.M. 86. S.S. 73.)

July 31. Sat. Rev. and Mrs. Sahlstrom started on a trip to Clayton yesterday. Have written to the children in the East. Received from Ada a novel plant from the Exposition called the "Resurrection Plant" that grows on Mexican hills at high attitude. It came to us a little wad of day, brown roots, but on being placed in water, comes out green, and this process can be continued indefinitely, if desired or it can be planted in the earth, and front will not hurt it. (T.S.R. 59. 2 P.M. 90. S.S. 77.)

Aug. 2. Mond. Received letter from Theresa and wrote to Eureka. Hannah, Lou and Alma went to see Will Moore's new cottage, which he has just built on the little corner of land by Knudsen's that he bought from me. They report it quite unique, with porch around it painted, papered and carpeted. Two rooms occupy the entire house. (T.S.R. 61. 2 P.M. 95. S.S. 80.)

Aug. 3. Tues. Have written to Ada. Mrs. McMartin died this morning in Oakland, at the home of her daughter Annie. Mrs. J.M. Benham. She has been failing health for was a year and not fit to live alone. About a month ago. Annie's daughter, Lila Tunnecliffe, came for her grandmother, and helped her to Oakland, where she underwent a serious operation at a Hospital, but had recovered sufficiently to go back to Annie's home, but died suddenly. She was 72 yrs. old and has two other daughters. Heuldah Thomas and Mary Earl, and Mary has a daughter Vera, married somewhere. Mrs. McMartin has lived here 33 yrs. (T.S.R. 57. 2 P.M. 94. S.S. 77.)

Aug. 5. Thurs. Mrs. McMartin was buried at the Brick Church cemetery. Rev. Sahlstrom, who had been at Clayton, came back of an in and intending to depart at once, but was persuaded to stay and officiate at the funeral, which he did - to depart again tomorrow for the rest of his vacation. Hannah and Jeanette with him constituted the choir at the grave. George and family, also Luther, have been in. Received letters from Willie and Ada. (T.S.R. 53. 2 P.M. 90. S.S. 75.)

Aug. 10. Tues. When Alma Locke came to help us this morning, she announced she must go right back to help her mother, but when she saw what a pressure of duties Hannah has upon her today she decided to remain just for today and help her. Hannah had ordered pears from the Japs some time ago, but they did not deliver then until this morning, and now they are fully ripe and must be cannot at once. She also had peaches on hand, and to make the pressure worse, the S. School children of the Beginners and Primary Grades had been invited to a Lawn Party this P.M. on our lawn. Mrs. Folendorf, the teacher of the Primaries, had just phoned that company had unexpectedly arrived to her, so she couldn't do a thing for the party, and that meant that Hannah would be expected to take the leading part, with Bernice Locke, the Beginners' teacher, to assist. Well, the party was held, with good attendance one box of pears was peeled ready for canning, and now we have Alma no more, and must depend on Celeste to help. Have written to Ada. We have enjoyed Alma's help very greatly, but now she is due to teach school in Lodi, and her mother needs her for the remaining days. (T.S.R. 53. 2 P.M. 92. S.S. 77.)