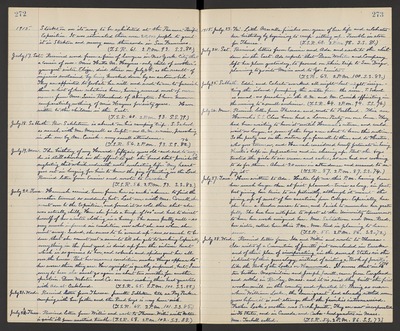 July 17. Sat. Received word from a firm of lawyers in New York City that a cousin of ours, Miss Hetta M. Haynes, only child of mother's youngest sister. Eliza. died there on July 4th, as the result of injuries sustained by being knocked down by an automobile. They an appointed to probate her will and wrote to me to furnish them or list of her relatives here, having secured most of our names from Mrs. Susie Blanchard of Abington. I have known comparatively nothing of Miss Haynes for sixty years. Have written to the children in the East. (T.S.R. 60. 2 P.M. 93. S.S. 79.)

July 19. Mon. The birthday of my Howard - fifty six years old and sad to say he is still absorbed on the effort to get the "bread that perisheth" neglecting that "which endureth unto everlasting life. "My heart goes not in longing for him to know the joy of trusting in the Lord. Received letter from Eunice and wrote to Eureka. (T.S.R. 56. 2 P.M. 93. S.S. 82.)

July 20. Tues. Hannah arrived home from her six weeks absence to find the weather turned so suddenly hot. Last eve with Mrs. Cornell, she went over to the Exposition, and found it so cold there that she was actually chilly. Here she finds a temp. of 100- and had to divest herself of her winter clothing in a hurry. She seems pretty well - so very much improved in condition over what she was when she went away. Indeed, she seems to be "wound up" - sees so much to be done that she cannot rest a minute till she gets to working. Especially everything in the front yard is died up from the intense heat which is so grievous to her, and cobwebs and spiders greet her all over the house. But her nervous condition makes thins appear to her worse than they are. Her eyesight is greatly improved, but, I am sorry to hear she must go again in about two months, for another operation. Dean Webster and Co. are now making their headquarters with Ada at Oakland. (T.S.R. 65. 2 P.M. 100. S.S. 88.)

July 24. Sat. Received letters from Eunice and Ada and wrote to the children in the East. Ada reports that Dean Webster and Company left her place yesterday, to proceed on their trip to San Diego, planning to go into Mexico and to Yo Semite. (T.S.R. 63. 2 P.M. 100. S.S. 83.)

July 26. Mon. Received letter from Theresa and wrote to Portland. This eve Hannah's S.S. Class have had a Lawn Party on our lawn. They had been waiting to have it until Hannah's return and could wait no longer, as some of the boys were about to leave this section. So the party was in the nature of a farewell to them and to Hester, who goes tomorrow, and Hannah considered herself fortunate in having Hester's help in preparations and in clearing up. But the boys treated the girls to ice cream, and cakes, so we had no cooking to do for them. About 20 were in attendance and seemed to enjoy it. (T.S.R. 57. 2 P.M. 87. S.S. 74.)

July 27. Tues. Have written to Ada. Hester left us this P.M. having been how much longer than at first planned, twice as long, in fact, but giving her time to us patiently, although it meant, the giving up of most of her vacation from College. Especially has she been a tender nurse to one, and I wish to remember her gratefully. She has been notified to report at the University tomorrow, to have her work assigned her. Mrs. Sahlstrom and Mrs. Reed, her sister, called here this P.M. Mrs. Reed is planning to leave soon. (T.S.R. 55. 2 P.M. 86. S.S. 72.)

July 28. Wed. Received letters from Ida and Willie and wrote to Theresa. Ida writes of a Convention of "Jewetts" just concluded in Eureka and of their plan of incorporating in the several States in the interest of their genealogy, instead of writing a "Book of Jewetts", like the Book of the Lockes or Hammonds. It seems that in 1738 two brothers, Maximilian and Joseph Jewett, came from England and settled in Rowley, Mass. and it is said they built the first woolen mill in the country and operated it. Being so near where "William Locke, the Immigrant" had already settled some years before, it is not strange that the families sister married. Father Locke's mother was Sarah Jewett. They are now incorporated in 36 States, and in Canada and Cuba - headquarters in Mass. Mrs. Tarbell called. (T.S.R. 54. 2 P.M. 86. S.S. 73.)