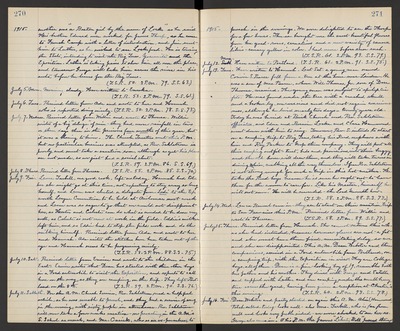 1915. mother was "a Boston girl by the name of Locke" as he said His brother Edward once worked for James Thorp, so he come to French Camp with a letter of introduction, and Jim sent him to Luther, as he wished to see Lockeford. He is touring the State, intending to visit the Big Trees, Yosemite and the Exposition. Luther is taking pains to show him all over the place, and tomorrow George will take him across the river in his auto, before he leaves for the Big Trees. (T.S.R. 50. 2 P.M. 79. S.S. 63.)

July 7. Wednes. Received letter from Willie and wrote to Theresa. Willie writes of a big "deluge" of rain, they had more rainfall in two or three days then in the previous four months of this year, but it was a blessing to him. The Church Trustees meet this P.M. but no particular business was attempted, as Rev. Sahlstrom is poorly and must take a vacation soon, although as get his plans are not made, so we just had a social chat. (T.S.R. 57. 2 P.M. 86. S.S. 69.)

July 9. Fri. Leone Tarbell, our good cook, left us today. Hannah had told her she might go at this time, not expecting to stay away so long herself, and Leone was elected a delegate from Lodi to the [?] worth League Convention to be held at Asilomar next week and Leone was so eager to go that we would not disappoint her, as Hester and Celeste can do what is needed to be done very well, as Celeste is not now at work in the field. Eddie's milker left him, and so Eddie had to stop the field work and do the milking himself. Received letter from Ada and wrote to her and Hannah. Ada writes the stitches have been taken out of the eye and Hannah seems to be progressing nicely. (T.S.R. 58. 2 P.M. 88. S.S. 75.)

July 10. Sat. Received letter from Eunice and wrote to the children in the East. Eunice writes that Dean has started with three other boys in a Ford automobile to visit the Exposition, and expects to call here on the way, as they are camping on the trip. They left Portland on the 8th. (T.S.R. 59. 2 P.M. 90. S.S. 76.)

July 11. Sabbath. For the A.M Church Service. Rev. Sahlstrom read a helpful article, as he was unable to preach, and they had a service of song in the evening, with sixty people in attendance. Rev. Sahlstrom will now take a four weeks vacation - no preaching in the A.M.'s S. School as unread, and Mr. Cusick, who is an ex-preachers, to

1915. preach in the evenings. We were delighted to see the Thorps for a few hours. Theresa brought me the most beautiful flowers from her yard-roses, carnations and a new variety of canna lillies-canary yellow in color. I had never before sun such. (T.S.R. 60. 2 P.M. 93. S.S. 79.)

July 13. Tues. Have written to Hannah. Last Sat. a young man named Corwin S. Pearce fell from a tree at the home near Linden. He was a son of Mrs. Pearce, whom Will Thomas, Jr. son of Dan Thomas, married. The young man was subject to epileptic fits. He was found under the tree with a crushed skull and a broken leg, unconscious and did not regain consciousness, although he lived nearly two days - twenty years old. Today he has buried at Brick Church and Rev. Sahlstrom officiated, and Edna and Bernice Locke and Clara Hammond went down with him to sing. Tomorrow, Rev. S. intends to start on a camping trip to Big Trees, taking his Reed nephews with him and Ray Parker to keep them company. They will put all their camping outfit-tent, beds and provisions, into their buggy and the old horse will draw them, and they will take turns in driving him, walking all the way themselves. I fear Rev. Sahlstrom is not strong enough for such a trip in this hot weather. He takes the Reed boys because he is sure he ought not to leave them for the woman to cafe for. Like his Master, "himself he will not save." He will be rewarded the Lord knowth how. (T.S.R. 58. 2 P.M. 88. S.S. 73.)

July 15. Thurs. Received letter from Hannah. She cannot return this wk. us she had intended, because her new glasses are not a fit and she must have them fixed, necessitating delay, so we and she are disappointed. This. A.M. Dean Webster and three companions, arrived in a Ford automobile from Portland, on a camping trip, with the Exposition in view. They are College boys, all of them. Dean is a fine looking boy of 19, resembles both his father and his mother. They dined with George and Estelle and supped with Luther and are camping under the mullberry tree across the yard, having been given a reception at Chester's this evening. (T.S.R. 60. 2 P.M. 93. S.S. 78.)

July 16. Fri. Dean Webster and party started on again this A.M. Alice (Hammond) Petch called today - looks well, also Mrs. Tarbell, who is far from well and looks very feeble indeed - we were shocked to see her so. George also came in. This P.M. the famous "Liberty Bell" pass through