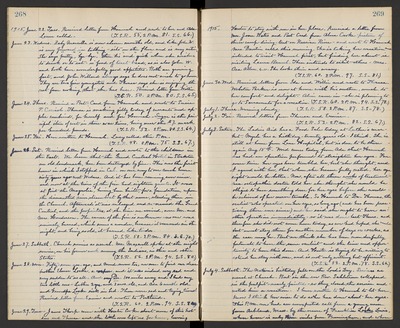 June 23. Wednes. Baby Marcella is now eleven months old, and like John W. is very forward in talking - sits on the floor and is very action. She says "pretty," "bye-bye," "there his" and "gink" when she wishes to drink or to eat is fond of toast bread, as in also John W. and both have wonderfully good appetites. Both are growing fast, and John Willard always says he does not wish to go home. They are two fine youngsters and Theresa says she is enjoying the rest from cooking that she has here. Received letter from Willie. (T.S.R. 50. 2 P.M. 80. S.S. 65.)

June 24. Thurs. Received a Post-Card from Hannah and wrote to Susie P. Cornish. Theresa is making jelly today of currants and apples combined, for herself and for Hannah. Sugar is the principal item of cost in there was times, being near the $7. mark per hundred pounds. (T.S.R. 52. 2 P.M. 80. S.S. 64.)

June 26. Sat. Received letter from Hannah and wrote to the children in the East. We learn that the Grand Central Hotel in Stockton an old landmark, has been destroyed by fire. This was the first house in which I stopped in Cal. on our way to our ranch home sixty years ago next Wednes. And it has been running ever since, and now at the time of the fire had eighteen guests. It was at first the "Magnolia," having been built, for a foundation, upon the dismantled river steamboat by that name, standing there in the Channel. Afterwards it was enlarged and renamed the Grand Central and the proprietors, at the time we arrived, were Mr. and Mrs. Henderson. The cause of the fire is unknown no one was seriously burned, which seems a wonder, because it occurred in the night, and being so old, it burned like tinder. (T.S.R. 52. 2 P.M. 84. S.S. 70.)

June 29. Tues. James Thorp came with Hester Cooke about noon of this hot day and Theresa and the little ones left us for home, leaving

1915. Hester to stay with me in her place. Received a letter from Mrs. Joan Bates and Post Card from Alma Cooke picture of their camp dining tent on Russian River and wrote to Hannah. Mrs. Dustin called this morning. She is taking her vacation and intended to visit Hannah first, but finding her absent is visiting Laura Bruml. Then intends to visit others. Mrs. Ora Allen. x.c. She looks thin and weary. (T.S.R. 60. 2 P.M. 97. S.S. 81.)

June 30. Wed. Received letters from Ida and Willie and wrote to Theresa. Webster Parker is now at home with his mother, much to her comfort and delight. Alice came in, she is planning to go to Sacramento for a vacation. (T.S.R. 58. 2 P.M. 87. S.S. 78.)

July 3. Satur. The Ladies Aid has a Food Sale today at Luther's market. Myrle has a birthday, twenty years old, I think. She is still at home from Lane Hospital, but is due to be there again Aug. 15th. Word comes today from Ada that Hannah has had an operation performed to straighten her eyes. For sometime her eyes have troubled her, but she thought, and I agreed with her, that when she became fully rested, her eye sight would be better. Now, After all these weeks of treatment her osteopathic doctor told her she thought she would be obliged to have something done for her eyes before she would be relieved of her nerve trouble. So Hannah to Dr. Thomas, the oculist who operated on her eyes, so long ago (and has been practising there ever since) and he said she ought to have another operation immediately, so it was done last Thurs. and therefore she did not come home today, as we had hoped she would best must stay there for another number of days or weeks, as the case maybe. But we think she has been wonderfully fortunate to have the same oculist and the time and opportunity to have this done. And Hester is trying to be willing to extend her stay with me, and is not only willing but efficient. (T.S.R. 52. 2 P.M. 78. S.S. 66.)

July 4. Sabbath. The Nation's birthday falls on the Lord's Day. Services as usual at Church. But in the eve Rev. Sahlstrom collapsed in the pulpit - nearly fainted - so they closed the service and voted him a vacation. I have written to Hannah to let her know I think her wise to do as she has done about her eyes. This P.M. we had an unexpected call from a young man from Arbeland, Mass. by the name of Franklin Locke Lewis, whose home is only three miles from Framingham, and whose