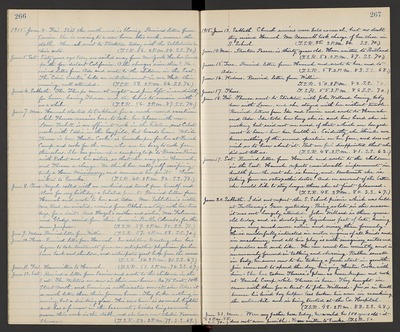 June 5. Sat. Sixty years ago today we sailed away from New York Harbor bound for the far - distant California. O the changes since then! Received letter from Ada and wrote to the children in the East. The "Civic Center" held an entertainment in our Hall this evening, well attended. (T.S.R. 58. 2 P.M. 86. S.S. 72.)

June 7. Mon. Hannah started to Oakland for a much needed vacation while Theresa remains here to take her place with me. Leone Tarbell is our efficient cook in the kitchen, and Celeste works with Eddie in the hay field, but boards here. While Theresa is here, Hester Cooke is housekeeper for her at French Camp, and cooks for the men, who are too busy to cook for themselves. She has given up a camping trip to Russian River with Robert and her sisters, so that she may give Hannah and Theresa a change. We think her really self-sacrificing - truly a Home Missionary, and commend her for it. Have written to Eureka. (T.S.R. 60. 2 P.M. 92. S.S. 78.)

June 8. Tues. Myrle called with an embroidered towel from herself and Alma for my birthday - a belated present. Received letter from Hannah and wrote to her and Ada. Mrs. Sahlstrom's sister, Mrs. Reed, an invalid, arrived from Oklahoma City, with her two boys, for a visit. And Hazel's mother and sister, Mrs. Falconer and Gladys, arrived from their home in Pueblo, Colorado, for the same purpose. (T.S.R. 59. 2 P.M. 92. S.S. 71.)

June 10. Thurs. Received letter from Hannah. In addition to resting, she has begun to take treatments from an osteopathic physician for her lame back and shoulder, and anticipates great help from the same. (T.S.R. 50. 2 P.M. 81. S.S. 67.)

June 12. Sat. Received a letter from Eunice and wrote to the children in the East. The Webster are now in their new home - no. 75 East, 10th Street North, and Eunice is enthusiastic over it, she likes it so much better than their former houses. They broke nothing in moving, but a drinking glass. This new home is so much lighter and has a furnace in the basement, besides being so much nearer their work in the stable, and she has a new Electric Vacuum Cleaner. (T.S.R. 52. 2 P.M. 79. S.S. 69.)

June 18. Fri. Theresa went to Stockton with John Willard leaving baby here with Leone, and she stayed with her without trouble. Received letters from Ida and Eunice and wrote to Hannah and Ada. Ida told how busy she is and how hard she is working but said not one word of that - which we longed most to hear - how her health is. Evidently she thinks we know nothing of the second operation on her face, and does not wish us to hear about it. But we feel disappointed that she did not tell us. (T.S.R. 48. 2 P.M. 81. S.S. 62.)

June 19. Sat. Received letter from Hannah and wrote to the children in the East. Hannah reports considerable improvement in health from the rest she is having, and treatments she is taking from an osteopathic doctor. And on account of the latter she would like to stay longer than she at first planned. (T.S.R. 48. 2 P.M. 80. S.S. 67.)

June 20. Sabbath. I did not report the S. School picnic which was held at Trethaway's Grove yesterday. Being so late in the season it was not largely attended. John Willard is three years old today and is developing boyishness fast of late, having grown very much more active and noisy than formerly. He is wonderfully interested in motor engines of all kinds and in machinery, and all his play is with imaginary autos and separators and such like. He can count ten correctly and is uncommonly forward in talking and observing. Rather small in body, he seems now to be taking a fresh start in growth. Jim came out to spend the day, bringing Haster Cooke with him. She has taken Theresa's place as housekeeper and cook at French Camp, while Theresa is here. They brought ice cream with them for a treat to John Willard. Jim is in trouble because his hired boy helper has broken his arm in cranking the automobile and is being treated at the Co. Hospital. (T.S.R. 48. 2 P.M. 83. S.S. 68.)