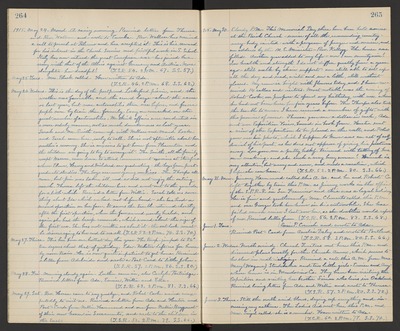 1915. May 24. Mond. A rainy morning. Received letters from Theresa and Rev. Wallace and wrote to Eureka. Rev. Wallace has received a call to preach at Palermo and has accepted it. This his reward for his interest in the Church Services and faithful work in S. School. Italy has now entered the great European war - has joined her army with that of the Allies against Germany and Austria. More slaughter - how dreadful! (T.S.R. 54. 2 P.M. 67. S.S. 57.)

May 26. Wednes. This is the day of the postponed Lockeford picnic, and the weather was favorable, and the crowd large - about the same as last year, but more automobiles than ever before, and fewer people came by train than formerly. Every one remarked on the great number of automobiles. We think affairs were conducted in a more orderly manner, not so much drunkenness as last year. Sarah and Mr. Smith came up with Wallace and Maude Locke and Sarah came here early to call. She is not optimistic about her mother's recovery. She is anxious to get home from Pleasanton and the children are going to try to arrange it. The Smiths, all the family except Warren, came down to attend Commencement exercises at Stanford where Elmer, Harry and Mildred are graduating - the boys from post-graduate studies. The boys are new young medicos. The Thorps all came, but Jim was taken ill, and so did not enjoy the outing much. Theresa left the children here and went out to the grounds for a little while. Received a letter from Willie. Sarah told us something about Ida which we had before heard, she has had a second operation on her face. It seems the trouble returned shortly after the first operation, when the face seemed nearly healed, and again she had the lump removed, which seemed about the size of the first one. She has not written us about it, the outlook must be discouraging to her and to us all. (T.S.R. 52. 2 P.M. 76. S.S. 70.)

May 27. Thurs. This has been our hottest day this year. The temp jumped to 86- ten degrees above that of yesterday. Edw. Webster left us for home by noon train. He is now quite impatient to get home. Received a letter from Adelaide and wrote a Post Card to little John. (T.S.R. 57. 2 P.M. 86. S.S. 80.)

May 29. Saturday. Bro. Horace came to say goodbye, and Robert Cooke arrived unexpectedly to visit us. Received a letter from Ada and Hauter and Post-Cards from Nellie Hammond and one from Nellie Bergquest of their new house in Sacramento, and wrote to the children in the East. (T.S.R. 52. 2 P.M. 79. S.S. 66.)

1915. May 30. Cloudy P.M. This Memorial Day there have been held services at the Brick Church - union of all the surrounding country - every-body invited - with a program of prayer and music, and an address by the M.E. Minister - Rev. Kellogg. The house was filled. Another year added to my life, not I am seventy nine! In health and strength I do not differ greatly from a year ago - still walk by chain support - am still able to sit up all the day and read, write and sew a little, still without glasses. My room is bright with flowers today, and I have received 14 callers and visitors. Most notable was the coming of Robert Cooke, on purpose to spend my birthday with me, when he had not been here for five years before. The Thorps also took the trouble to come. I have received a number of gifts, with the promise of more. Theresa gave me a dollar in cash, Ada sent me Exposition Views, bound in book form. Hester sent a view of the Exposition to be placed on the wall, and Robert gave me his photo, which I happen to know was an act of my denial of his part, as he does not approve of giving is pictures away. Lou gave me a pretty hdkf. trimmed with tatting of her own making - and she such a very busy woman! Hannah is very attentive, but weary and worn, and needs a vacation, which I hope she can have. (T.S.R. 52. 2 P.M. 80. S.S. 66.)

May 31. Mon. Jimmy Hammond called this A.M. and he and Robert C. left together by train this P.M. as Jimmy works in the office of the S.P.P.R. in San Francisco and this was a legal holiday. He is fine and gentlemanly. Mrs. Clements called this P.M. and our George took her home in his automobile. She has failed much since I last saw her, as he doubtless would report of me. Received letter from Susie P. Cornish and wrote to Ada. (T.S.R. 56. 2 P.M. 83. S.S. 68.)

June 2. Wednes. North windy. Church Trustees met here this P.M. and discussed plans mostly for the Church Annex, which seems to be slow in materializing. Received a call this A.M. from Mrs. Mary (Wagner) Studebaker and two little girls, Eunice and Amy, whose home is in Mendocino Co. They have been visiting the Exposition and visiting her brother Simon who lives in Oakland. Received loving letters from Ada and Willie and wrote to Theresa. (T.S.R. 57. 2 P.M. 80. S.S. 72.)