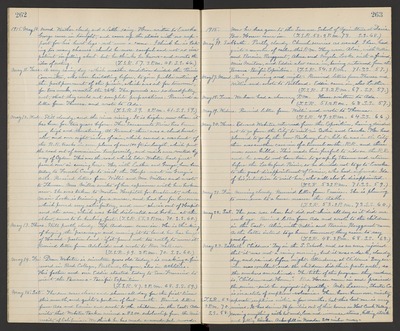 1915. May 10. Mond. Weather cloudy and a little rainy. Have written to Eureka. George came in tonight, and came up the stairs with no support for his hurt legs - not even a cuns. I think he is taking too many chances - should be more careful and not so impatient in getting about - but he thinks he knows and scouts the idea of resting. (T.S.R. 57. 2 P.M. 68. S.S. 66.)

May 11. Tues. A very rainy day - which weather condition decided the Picnic Committee, who were hesitating before, to give public notice of the postponement of the picnic, which was set for tomorrow, for two weeks, or until the 26th. The grounds are so dreadfully wet, that they could not complete preparations. Received a letter from Theresa and wrote to Ada. (T.S.R. 59. 2 P.M. 61. S.S. 59.)

May 12. Wed. Still cloudy, and the river rising. It is higher now than it has been for two years before. The Sacramento River has been very high and threatening. At Kennet there was a cloud burst also, and over eight inches of rain, which caused a washout of the R.R. tracks in some places of over 100 ft. in length, which put the road out of commission temporarily, and mails were routed by way of Ogden. This was the road which Edw. Webster had just passed over in coming here. He, with Luther and George, have been today to French Camp to visit the Thorps - went in George's auto. Received letters from Willie and Mrs. Miller and wrote to Theresa. Mrs. Miller writes of her experience with her broken arm. She was taken to Morton Hospital for treatment, where Marie Locke is training for a nurse, and had her for her nurse which proved very satisfactory, and now she is out of Hospital and the arm, which was both dislocated and broken at the elbow, seems to be healing fast. (T.S.R. 55. 2 P.M. 70. S.S. 60.)

May 13. Thurs. Still partly cloudy. Tip Anderson came in. He is thinking of buying the parsonage and moving it to land he has bought of Howard - pasture land - if it proves not too costly to move it. Received letter from Adelaide and wrote to Rev. Wallace. (T.S.R. 49. 2 P.M. 70. S.S. 60.)

May 14. Fri. Dean Webster is nineteen years old today - is making a fine record in Reed Collage, Portland, Oregon, also in Athletics. His father and our Eddie started today to San Francisco to visit the Panama-Pacific Exposition. (T.S.R. 47. 2 P.M. 68. S.S. 59.)

May 15. Sat. The sun rose clear and shine all day for the first time this month, and quite a portion of last month. Received letters from Ada and Eunice and wrote to the children in the East. Ada writes that Webster Parker received a $200. scholarship from the University of California. We think he has made a wonderful word.

May 16. Sabbath. Partly cloudy. Church services as usual. I have had quite a number of callers this P.M. They were Alice, with Nellie and Bernice Bergquest, Alma and Myrle Locke with a friend, Miss Merton, and Eddie also came in, having returned from the Panama-Pacific Exposition. (T.S.R. 54. 2 P.M. 71. S.S. 57.)

May 20. Thurs. Edward Webster returned from the Exposition, having decided not to go from the City to visit in Scotia and Eureka. He had planned to go by the new Railway, but while he was in the City there was another cave-in of a tunnel on the R.R. and three men were killed. This made him fearful to ride on the R.R. and he would not have time to go up by Steamer and return before the Lockeford Picnic, so he decided not to go to Eureka to the great disappointment of Eunice, who had informed Ida of his intention to visit her, who will also be disappointed. (T.S.R. 52. 2 P.M. 71. S.S. 59.)

May 22. Sat. The sun rose clear but did not shine all day as it did one week ago. Received letter from Ada and wrote to the children in the East. Alice, with Nellie and Bernice Bergquest came as the latter intend to go home tomorrow, they came to say goodbye. (T.S.R. 48. 2 P.M. 68. S.S. 63.)

May 23. Sabbath. Children's' Day in the S. School, and so we were rejoiced that it was not a rainy morning, but it was a dark, cloudy day, and rained before night. Attendance at Children's' Day service was excellent, and the children did their parts well, so the conkers are relived. The title of the program they rendered is "Children and Home". Bro. Horace came in and praised the service - said he enjoyed it greatly. Mt. Lassen, Shasta Co. is in a state of eruption - volcanic. There have been over ninety separate eruptions within a few months, but this last one is very serious. It has driven 36 families out of their homes in West Creek Valley, covering everything with hot mud, lava and immense stones, killing stock and falling timber. Ashes fell in Nevada, 200 miles away. (T.S.R. 52. 2 P.M. 70. S.S. 58.)