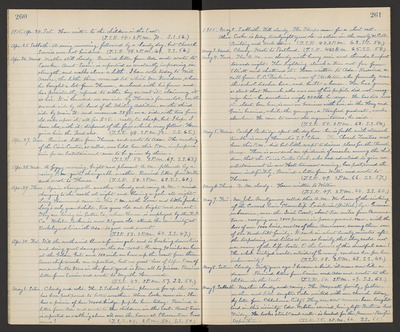 Apr. 26. Mond. Weather still cloudy. Received letter from Ada and wrote to Eureka. Aunt Susie is reported as constantly improving in strength, and walks alone a little. I have sold today to Will Moore, the little three-cornered lot which Mr. Knudson, when he bought a lot from Theresa, enclosed with his fence and has persistently refused to either buy or rent it, claiming it as his. It is bounded on one side by Theresa's former lot, on the second side by the land of the Whitney Addition, on the third side by Main St. and measure 38 ft. on a side, with two fine old oaks upon it, all for $25. - really too cheap, but I hope I have also, with it, disposed of the fuss which may follow. Have given him the Deed also. (T.S.R. 48. 2 P.M. 72. S.S. 65.)

Apr. 29. Thurs. Again changeable weather cloudy and rainy A.M. - wind changing to the north at night and blowing a gale all night. Lucy Hammond came in this P.M. with Lena and little "Jackie" Lucy's only grandchild, two years old and bright and smart. They are living in Sutter Co., where Horace is employed by the R.R. Co. Webster Parker is now 21 years old - attends the University at Berkeley and live with Ada - is good and smart. (T.S.R. 53. 2 P.M. 63. S.S. 47.)

Apr. 30. Fri. Still the north wind blows a furious gale and is breaking down trees and doing great damage on the sea-coast - blowing 90 miles an hour at the Golden Gate and 100 miles an hour up the coast from there. Some ship-wrecks are reported, but no great loss of life. One of our umbrella trees in the front yard is torn all to pieces. Received letter from Eunice and wrote to Myrtle Hammond. (T.S.R. 43. 2 P.M. 57. S.S. 53.)

May 1. Satur. Cloudy and cold. The S. School picnic, planned for up the river has been postponed to better weather. Alma Locke came in. She has a picnic of her Woodbridge pupils here today. Received a letter from Ada and wrote to the children in the East. Aunt Susie is reported as walking alone all over the house at Pleasanton. Good news! (T.S.R. 43. 2 P.M. 54. S.S. 50.)

May 4. Tues. The A.M. was cloudy with heavy rain and thunder tempest toward night. The lightning struck a tree not far from Elliott and shattered it. Have written to Ada. Received a call from E.C. Dickinson, now of Stockton, who formerly was the school teacher here, and built a house. He has grown as stout that Hannah, who was one of his pupils, did not recognize him, he sometimes weighs 240 lbs. he says. He has two sons the eldest, born here, is now in business with him in the Hay and Grain business, while the younger, a Stanford graduate, works elsewhere. He came to renew old acquaintances, he said. (T.S.R. 51. 2 P.M. 62. S.S. 50.)

May 5. Wednes. Carlyle Partridge spent the day here - he is feeble with stomach trouble - is one of Hannah's S.S. Class. The Church Trustees met here this P.M. - did but little except to discuss plans for the Church Annex. There is now such an epidemic of measles among the children, that the Civic's Center Club, who had advertised to give an entertainment in our Hall tomorrow evening, has postponed the some indefinitely. Received a letter from Willie and wrote to Theresa. (T.S.R. 49. 2 P.M. 66. S.S. 57.)

May 7. Fri. Mr. John Montgomery called this A.M. We learn of the sinking of the Cunard liner Steamship Lusitania (British) by a German submarine, near the Irish Coast, about ten miles from Queenstown, carrying over 2000 persons in passengers and crew, with the loss of over 1000 lives, over 100 of them Americans, among them one of the Vanderbilt family. It sank in about twenty minutes after the torpedoing, and listed at once so heavily that they could not use many of the life boats. O the horrors of this dreadful war! The whole civilized world, outside of Germany, condems her for her inhumanity! (T.S.R. 48. 2 P.M. 68. S.S. 60.)

May 9. Sabbath. Weather cloudy and rainy. The Maxwell family, father, mother and little daughter Eula united with our church today by letter from Oklahoma City. They are new comers - have bought land in this vicinity. Edw. Webster arrived, having left Portland last Friday. He looks stout and well - is headed for the Panama-Pacific Exposition. (T.S.R. 55. 2 P.M. 66. S.S. 61.)