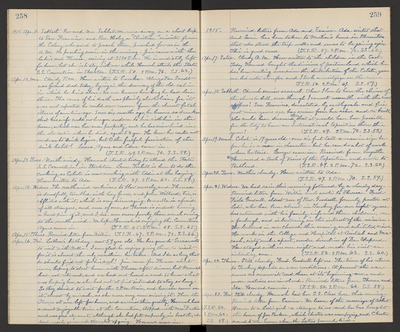 1915. Apr. 11. Sabbath. Rev. and Mrs. Sahlstrom were away on a short trip to San Francisco, and Rev. Haley, a "Christian" minister from the Colony, who used to preach there, preached for us in the A.M. No preaching service in the evening. Jim came with the babies and Theresa, arriving at 3:30 P.M. He immediately left for home, but she is to stay with me while Hannah attends the State S. S. Convention in Stockton. (T.S.R. 50. 2 P.M. 76. S.S. 62.)

Apr. 12. Mon. Cloudy P.M. Have written to Eureka. Alonzo Van Sandt was found dead today, lying in the doorway of the old cabin in which he lived alone. No one knows how long he had lain there. The cause of his death was plainly alcoholism, for it was not expected he could ever recover from the almost fatal illness of sometime ago. Some six months ago, he became so drunken that his wife could no longer endure to live with him in the home, which was her own property, and he has since lived in the old cabin where he died, aged 54 yrs. He knew he could not endure to drink liquor, but O the fearful fascination of the drink habit! Laura, Agnes and Edna came in. (T.S.R. 49. 2 P.M. 70. S.S. 59.)

Apr. 14. Wednes. The north wind continues to blow severely and Theresa is dreadfully trouble with hay fever, and John Willard, too, is afflicted with it, which is very discouraging. Marcella is afraid of all strangers, and even of one, so Theresa is indeed having a hard time of it, and I, too, am more poorly than usual owing to the north wind. We hope Hannah is enjoying the Convention Agnes came in. (T.S.R. 45. 2 P.M. 68. S.S. 65.)

Apr. 16. Fri. Luther's birthday - now 59 yrs. old. He has gone to Sacramento to visit with Nellie. I am glad he enjoys going there to visit for it is almost the only recreation he takes. And I do so long that he should find rest for his soul! Jim came for Theresa about noon, hoping to start home with Theresa after dinner, but Hannah had not returned, and we had not heard a word to know what was keeping her, as she had not at first intended to stay so long. So they decided to wait for the 2 P.M. train, and here she came on it, almost by miracle, as she came very near missing it. Then the Thorps at once left for home, and we miss them greatly. Hannah had a most enjoyable time at the Convention, stopped with Mrs. Dustin and was glad she went, although she had felt so poorly in health, she had nearly given up thought of going. Howard came in.

Apr. 17. Satur. Cloudy A.M. Have written to the children in the East. Today Howard bought the divisions of pasture land which he has been renting ever since the distribution of the Estate, gave me his note therefore and I took a mortgage on the same. (T.S.R. 50. 2 P.M. 69. S.S. 57.)

Apr. 18. Sabbath. Church services as usual. O how I love to hear the chime of the church bell, even though I cannot assemble with the worshippers! San Francisco, devastated by earthquake and fire just nine years ago, has arisen from her ashes and re-built. We could have dreamed than that it would have been possible for the City to have an International Exposition there this year? (T.S.R. 49. 2 P.M. 72. S.S. 55.)

Apr. 21. Wednes. We had rain this morning followed by a cloudy day. Received letter from Willie, and wrote to Theresa. Fred Field Goodsell, eldest son of Rev. Goodsell, formerly pastor at Lodi, who has been absent in Turkey for over eight years, has returned with his family, wife and three children, on a furlough, and is lecturing in the interest of the mission. He lectures in our church this evening, and exhibited views. He works in the College and Hospital at Aintab and Marash, sixty miles apart, under direction of Dr. Shepard. He stayed with us over night, and made his visit an interesting one. (T.S.R 52. 2 P.M. S.S. 60.)

Apr. 22. Thurs. Still cloudy. Fred. Goodsell left us. The time of his return to Turkey depends on war conditions. At present the war seems no nearer its end than at its beginning - more and more nations are involved. Received letters from Theresa and Ida. Howard came in. (T.S.R. 50. 2 P.M. 64. S.S. 58.)

Apr. 23. Fri. Still cloudy. Hannah had her S.S. Class here this evening. Received letter from Eunice. We learn of the marriage of Albert Brown to a Lodi girl - a stranger to us and he has bought the house of Joe Parker, which Chester was occupying, and Chester moved to the house where the Lottas formerly lived. (T.S.R. 50. 2 P.M. 62. S.S. 58.)