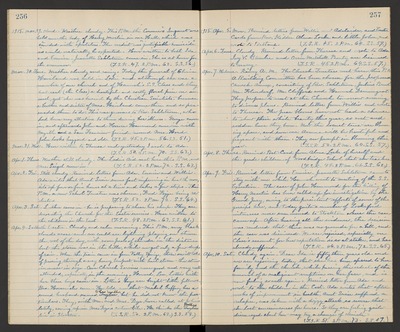 1915. Mar. 29. Mond. Weather cloudy. This P.M. the Coroner's Inquest was held over the body of Harry Martin in one Hall, which was crowded with spectators. The verdict was "justifiable homicide." as would naturally be expected. Have written to both Ida and Eunice. Janette Sahlstrom came in. She is at home for the summer. (T.S.R. 47. 2 P.M. 62. S.S. 56.)

Mar. 30. Tues. Weather cloudy and rainy. Today the funeral of Elvina Haviland was held in Lodi and although she was a member of our church and of Hannah's S.S. Class and they had sent (the Class) a beautiful and costly floral piece on an easel, yet she was buried by the Christian Scientists, because a brother and sister of Mrs. Haviland came there and so persuaded them to do. This was grievous to Rev. Sahlstrom, who had been very attentive to them during her illness. George came in, and afterwards John and Horace Hammond came in with Myrtle and a San Francisco friend, named Mrs. Hard. John looks haggard and old. (T.S.R. 45. 2 P.M. 56. S.S. 51.)

Apr. 4. Sabbath. Easter. Cloudy and calm morning. This P.M. very black clouds arose and we could see lightning playing on them the rest of the day, with some peals of thunder in the distance but the storm was in the hills, while we got only a few drops of rain. When the train came in from Valley Springs, those on its told of passing through a very heavy tempest with hail storm, the stones immense in size. Our Church Services were good and very well attended, especially in the morning. Howard, Lou, Lottie with her three boys came in. Lottie's boys are bright little fellows. Bro. Horace also came. He told me that Mabel Geffroy has a second husband named Chas Walker, but he did not know the particulars. They, with Mr. and Mrs. Dye, have called at John's lately, coming up in Mr. Dye's automobile. He thinks the Walkers live in Stockton. (T.S.R. 50. 2 P.M. 68. S.S. 58.)

Apr. 7. Wednes. Rainy A.M. The Church Trustees met here this P.M. A Building Committee has been chosen for the proposed Church Annex, consisting of Rev. Sahlstrom, Julius Bruml. Mr. Folendorf, Mr. Clifford and Hannah Demangeot, They propose to meet at the Church tomorrow evening to discuss plans. Received letter from Willie and wrote to Theresa. The pear blooms have not had a chance to show their while beauty this year, so wet and sodden have they been. Now the locust trees are blooming apace, and soon our Avenue will be beautiful and fragrant with them. They are prompt in blooming this year. (T.S.R. 52. 2 P.M. 60. S.S. 57.)

Apr. 9. Fri. Received letter from Eunice. Jeannette Sahlstrom came to stay with me while Hannah went to meeting of the S.S. Executive. The case of John Hammond for the killing of Harry Martin has been called up for investigation by the grand Jury, owing to the persistent efforts of some of the gossips here, and today quite a number of Lockeford witnesses were summoned to Stockton where the case came up. After hearing all the evidence, the decision was rendered that there was no grounds for a bill, and the case was dismissed. We are rejoiced, especially on Clara's account, for her reputation is so at stake, and has already suffered. (T.S.R. 46. 2 P.M. 72. S.S. 65.)

Apr. 10. Sat. Cloudy again. Dear Ida is fifty three years old and we are rejoicing today that she has been spared to her family and the church, while passing the ordeal of the removal of a malignant eruption on her face, and is now feeling so well again. Received letter from Ada and wrote to the children in the East. Ada writes that after weeks of improvement in health, Aunt Susie suffered a relapse, was taken with a dizzy attack, so severe that she lost consciousness for hours. So they are feeling quite discouraged about her, may try a change of climate. (T.S.R. 51. 2 P.M. 73. S.S. 67.)