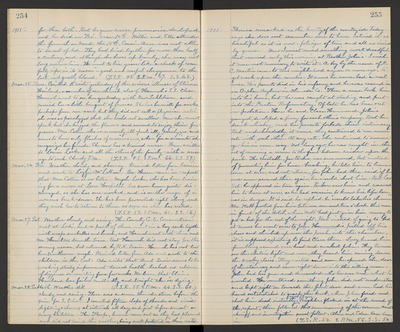 1915. for them both. But he grew worse, pneumonia developed, and he died on Fri. Mar. 12th. Willie and Etta attended the funeral on Mond. the 15th. Cousin Anne was not able to be out of bed. They had lived together for more than half a century, and although she bears up barely, she may not long survive him. He went to his grave "like a shock of corn fully ripe, in its season" - good and useful clergyman to the last, and greatly beloved. (T.S.R. 45. 2 P.M. 67. S.S. 63.)

Mar. 25. Thurs. Omitted to write yesterday of the serious illness of Elvina Haviland, a member of our church, also of Hannah's S.S. Class. Hannah went to see her yesterday with Rev. Sahlstorm and carried her a little bouquet of freesias. She has been ill for weeks, perhaps for over-work, but they did not call a physician until she was so paralyzed that she could not swallow. Now she cannot speak but she hugged the flowers and seemed to enjoy their fragrance. Mrs. Cotton also is seriously ill-partially paralyzed and seems to have only flashes of consciousness, when for a minute she recognizes her friends. She now has a trained nurse. Have written to Louise Locke and all the others of the family - with a message to each. Cloudy P.M. (T.S.R. 45. 2 P.M. 66. S.S. 59.)

Mar. 26. Fri. Weather cloudy and showery. Received letter from Eunice and wrote to Lizzie McLellan. Bro. Horace came in reports that Mrs. Cotton is no better. Myrle Locke, who has been training for a nurse at Lane Hospital, has come home quite discouraged, as she has over-worked, and is on the verge of a nervous break-down. She has been promoted right along and they wish her to return to them as soon as she has rested. (T.S.R. 53. 2 P.M. 62. S.S. 56.)

Mar. 27. Sat. Weather cloudy and rainy. The County C.E. Convention met at Lodi, and a part of them went in a hay-rack together with wraps, umbrellas and lunch, and Hannah went with them and Mr. Hamilton drove the team. But Hannah did not stay for the evening session, but returned by R.R. train. Hannah has not lost her troublesome cough. Received letter from Ada and wrote to the children in the East. Ada writes that Aunt Susie seems to be making steady improvement towards health - has had no return of dizziness or vomiting for a few weeks. We learn that Elvira Haviland has failed constantly and tonight she is dying. (T.S.R. 55. 2 P.M. 66 S.S. 60.)

Mar. 28. Sabbath. Weather still cloudy and rainy. There was a severe thunder storm before the time for S. School. I counted fifteen claps of thunder and vivid lightning - showers at intervals all day, and just before sunset a heavy hailstorm. The Thorps, however came out as they had planned and did not mind the weather, being well protected in their auto.

1915. Theresa remarked on the beauty of the country side today - says she does not remember ever to have noticed it so beautiful as it is now - foliage of trees and all so vividly green. Now I must record something most dreadful that occurred early this morning at Brother John's - I wish it were not necessary to write it. A boy by the name of H. C. Martin came to this neighborhood a year or more ago, to get work upon the ranches. It seems he never had a real home. His parents died in his infancy and he was reared in an Orphan Asylum in Alameda Co. Then a man took him into his home, but he was caught at stealing and put into the Preston Reformatory. Of late he has been out on probation. Here he and Clara Hammond, John's youngest, developed a fancy for each other's company. But he drank whiskey, and her parents forbade their intimacy. But, underhandedly, it seems, they continued to communicate with each other. At any rate, she continued to encourage him in some way. Not long ago, he was caught in the act of removing a screen to the part bedroom window upon the porch. The constable, Joe Parker, was summoned, but instead of prosecuting him for house-breaking, he told him to leave town at once, and not return, for John had then said if he ever came around there again, he would shoot him. But last Sat. he appeared in town again. Parker saw him and warned him to leave at once, as he had occasion to know his life here was in danger. It is said he replied he "would take his chances". Wm. Webb parted from him between one and two o'clock this morn in front of the Hotel, where Webb had just given him money to get a bed for the rest of the night. But instead of going to bed it seems he went over to John Hammond's, pulled off his shoes and climbed up over the porch into the chamber, it is supposed expecting to find Clara there. Lucy heard him fumbling around over-head and awaked John. They turned on the electric light and soon they heard him coming down the creaky stairs. They waited and soon he opened the door of the stairway and came right down into the sitting room. John had his gun and demanded who he was and what he wanted. He muttered something John did not understand and kept right on towards the front door and even had his hand outstretched to grasp the knob, when John fired and shot him dead instantly aged 19 yrs. Neighbors flocked in at the sound of the report, then followed the summoning of the coroner and sheriff and investigation must follow. Alma and Edna have been in. (T.S.R. 54. 2 P.M. 56. S.S. 50.)