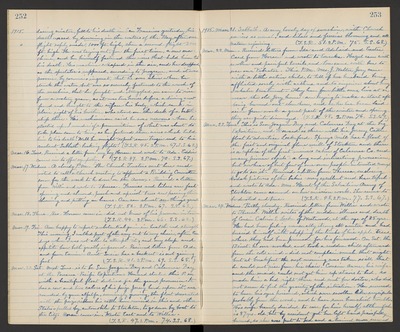 1915. daring aviator, fell to his death in San Francisco yesterday, his death caused by drowning in the waters of the Bay, after one flight safely made, 1000 ft. high, then a second flight 3000 ft. high. He was trying out, for the first time, a new machine, and he himself fastened the wires that held him to his death. His machine collapsed in the air, and he dropped as the spectator's supposed, according to program, and it was proven, by coroner's inquest, that he was alive when he struck the water, but was so securely fastened to the wreck of the machine, that he fought and struggled in rain to rise from a watery grave, as it was two hours before a diving crew found and brought to the surface his body, which sank in plain sight to his brother, who stood on the deck of a battleship there. His mechanician said he was nervous when he started up. I wonder if a premonition of what was about to take place come to him, as he fastened those wires which held him to his death! Well he might expect some tragic end to his constant Sabbath - breaking flights! (T.S.R. 45. 2 P.M. 67. S.S. 63.)

Mar. 17. Wednes. A cloudy P.M. The Church Trustees met here and voted to call a Church meeting to appoint a Building Committee soon, for the work to be done on the Annex. Received a letter from Willie and wrote to Theresa. Freecias and lilacs are fast opening, and almond, peach and apricot trees are passing their blooming and putting on leaves. One can almost see things grow. (T.S.R. 52. 2 P.M. 67. S.S. 63.)

Mar. 19. Fri. Am happy to report substantial gain in health and strength This morning I walked part of the way out to my chair, after ten days when I was not able to attempt it, and my sleep and appetite have both greatly improved. Received letters from Ada and from Eunice. Aunt Susie has a backset - is not gaining fast. (T.S.R. 41. 2 P.M. 69. S.S. 65.)

Mar. 20. Sat. Next Tues. is to be San Joaquin Day and Calaveras Day at the Panama - Pacific Exposition. Howard started this P.M. with a beautiful float destined for the grand procession. It has a cow and two calves of his prize Jersey herd upon it, surrounded by green alfalfa, seemingly growing, the float decorated with the prize ribbons his cattle have revived in this and other States - pulled by automobile to Stockton, to go down by boat to the City. Horace came in. Wrote East and to Willie. (T.S.R. 47. 2 P.M. 74. S.S. 68.)

Mar. 22. Mon. Received letters from Ida and Adelaide and Easter Card from Horace and wrote to Eureka. Hazel came with swollen and painful tonsils, and Lou came with her to use our Vibrator. This P.M. Mrs. J. Walter Jory came with a little active child, to tell of her husband being afflicted sorely with asthma and to inquire about my Inhaler treatment. They have four little ones, live at or near the old Jory, home - are trying to make a start after being burned out elsewhere, and as he has been laid aside from work a great part of the winter and spring, they are quite discouraged. (T.S.R. 48. 2 P.M. 76. S.S. 69.)

Mar. 23. Tues. This is San Joaquin Day and Calaveras Day at the big Exposition, and Howard is there with his Jersey Cattle float at advertise Lockeford. Sperry's Mill has a float of the first and original flour mill of Stockton and there is a replica of the first miner's cabin of Calaveras Co. and many pioneer objects - a long and interesting processions, but we hear of but few of our own people interested enough to go to see it. Received a letter from Theresa, enclosing kodak picture of the babies - very excellent and beautiful - and wrote to Ada. Mrs. Hunt of the Salvation Army of Stockton came around on her mission work. She seems to be devoted and true. (T.S.R. 48. 2 P.M. 77. S.S. 67.)

Mar. 24. Wednes. Partly cloudy. Received letter from Willie and wrote to Theresa. Willie writes of the sudden illness and death of Cousin Calvin S. Locke of Westwood, at the age of 85 yrs. He had been feeling unusually strong all winter and had busied himself with chopping the limbs of his apple trees, where they had been pruned, for his firewood. On Sat. the 13 inst. he over-worked, and took a sudden chill afterward from the cold wind - did not complain much that night, but at breakfast the next morning was taken so ill that he could not rise from his chair. Cousin Anne, his wife and the maid, could not get him up-stairs to bed, so made him a bed right there and sent for doctor, who did not seem to feel the gravity of the situation. He seemed to have his eyes poisoned, which were swollen like erysipelas probably from the wood, and to have some bronchial trouble. His wife bravely decided to care for him herself, although she is 87 yrs. old, but by accident got her left hand painfully burned, so she was put to bed and a trained nurse secured