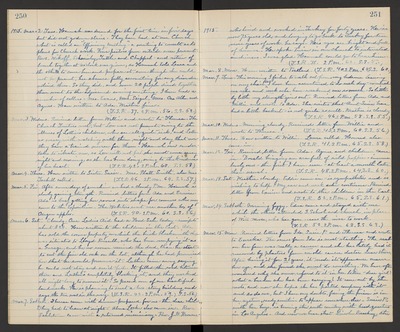 1915. Mar. 2. Tues. Hannah was dressed for the first time in five days but did not go down stairs. They have had at our Church what is called an "Efficiency Meeting" - a meeting to consult as to plans for Church work. Four pastors from outside were present. Revs. Wikoff, Schirmley, Tuttle and Chappel - and notice of lunch together at 6 o'clock was given, so Hannah told Laura and the others to come here and prepare it, even though she could not be present, her absence fully accounting for any disorder noticed there. So they did, and some 20 people dined together then went to the adjourned evening meeting. I have had a number of callers - Mrs. Earns, Mrs. Siegel, Mrs. Ora Allen and Agnes. Have written to Ada. Weather fine. (T.S.R. 37. 2 P.M. 56. S.S. 52.)

Mar. 3. Wednes. Received letter from Willie and wrote to Theresa. The Church Trustees met, but Lou was not present, owing to the illness of Lottie's children, who are all quite sick, and Lottie so weary with watching with them night and day that now they have a trained nurse for them. Hannah now undertakes to vibrate me, so Lou will not feel, she must come every night and morning, as she has been doing, owing to the kindness of her heart. (T.S.R. 42. 2 P.M. 60. S.S. 58.)

Mar. 5. Fri. After some days of sunshine we had a cloudy P.M. Hannah is slowly gaining strength. Received letters from Ada and Eunice. Ada is busy getting her rooms into shape for roomers who may come to the Exposition. The Webster sent me another box of Oregon apples. (T.S.R. 40. 2 P.M. 60. S.S. 56.)

Mar. 6. Sat. Cloudy. Our Ladies Aid had a Food Sale today - receipts about $24. Have written to the children in the East. Ada has sold the corner property on which the brick blacksmith shop was situated to Lloyd Russell, who has been occupying it as a Garage, and he no sooner received the deed, than he started to cut the fine old oak on the lot, although he had promised her that he would preserve it. Luther came away saying he could not staying and see it fall. It filled the road between there are Luther's completely blocking it, and they worked all night long to remove it. So passed one of our beautiful landmarks. He is planning to erect a two-story building and says the tree was in the way. (T.S.R. 42. 2 P.M. 59.) S.S. 56.)

Mar. 7. Sabbath. Theresa came with dinner prepared for us - the dear child. They had to leave at night. Alma Locke also came in. Rev. Sahlstrom came with a returned missionary. Rev. J.H. Browne -

Mar. 9. Tues. This morning I failed to walk out form my bedroom leaning on my chair as I have been accustomed to do each day - so much ear ache and neck ache have weakened me so much. So little by little my strength gives out. Received letters from Ada and Willie and wrote to Ada. She writes that Aunt Susie has had a little backset - is not quite so well. Weather is cloudy. (T.S.R. 46. 2 P.M. 58. S.S. 55.)

Mar. 15. Mon. Received letters from Ida, Susie P. and Theresa and wrote to Eureka. The news from Ida is most startling. The scab on her face was really a cancer and she has lately had it removed by plasters from an old cancer doctor near there. After having it for 21 years, it made it appearance nearer her eye, and she found she must do something. We have often wondered why she never referred to it in her letters - dear girl! what a burden she has been carrying! It came out by the roots, and now she hopes she has parted company with it and so do we, but I have my doubts, fearing the poison is in her system, ready sometime to appear somewhere else. Susie P. with her boys, is touring the south country, with headquarters in Los Angeles. And now we hear that Lincoln Beachey, the