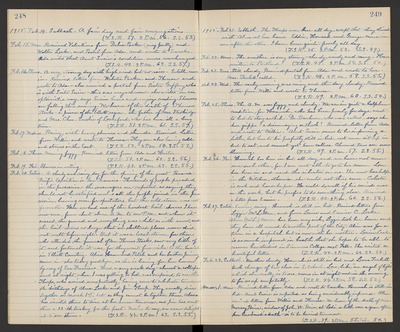 Feb. 16. Tues. A very storm day with high wind but no rain. Estella came in. Received letters from Webster Parker and Theresa and wrote to Ada - also received a postal from Sister Geffroy who is with Sister Susie - this was very welcome - she writes in an optimistic way, says Susie hears and enjoys reading. Showers are falling this evening. We learn of the death of Thomas Stacks - a pioneer of the Elliot region, the father of Mrs. Steobridge and Mrs. Chas. Emslie of Lockeford, who has been ill a long time. (T.S.R. 51. 2 P.M. 61. S.S. 57.)

Feb. 20. Satur. A cloudy and rainy day for the opening of the great Panama - Pacific Exposition in San Francisco. Thousands of people paraded in the procession the managers are reported as saying they should not be satisfied unless all the people joined in the procession, leaving none for spectators, but the cold storm was not favorable. Here we had one of the hardest hail-showers I have ever seen, from about eleven A.M. to one P.M. and when it ceased, the ground and everything was white as with snow, and the hail-stones so large that in sheltered places some did not melt before night. But it was a local storm, for them who attended the funeral of Mr. Thomas Stacks, saw very little of it, and fortunate it was, for they went five miles to the burial in Elliot Cemetery. Alice Hammond Petch and her brother Jimmy came in - she to say goodbye, as she is leaving for her home by way of San Francisco. Had a very weak day - almost a collapse and at night, when I was getting to bed, was surprised to see the Thorps, who arrived unexpectedly, having come to celebrate tomorrow the birthdays of Alma Locke and Jim Thorp. They usually dine together on March 1st, but as they cannot be together then, Alma has invited them to dine at her home tomorrow, and Jim as sent them a 22-lb. turkey for the feast. Needless to say, we were delighted to see them. (T.S.R. 44. 2 P.M. 63. S.S. 55.)

Feb. 25. Thurs. The A.M. was foggy and cloudy. We are in quite a helpless condition, for Hannah, who has been poorly for days, went to bed to stay awhile. Dr. Barbour, who has called, says she has grippe - a discouraging outlook! Received letter from Ada and wrote to Willie. Aunt Susie seems to be improving a little, but has to lie perfectly still in bed, not even sit up in bed to eat, and cannot yet have callers. Almond trees are now blooming. (T.S.R. 49. 2 P.M. 57. S.S. 55.)

Feb. 27. Satur. Evening rainy. Hannah is still in bed. Received letters from Lizzie McLellan, and from Louise and Eunice C. Locke Alice (McL.) Moore has been very sick, Lizzie took her home and they have all moved to another part of the city. Alice was for a time in a hospital, but is now with her mother. Louise Locke is so much improved in health that she hopes to be able to resume her studies in Simmons College next Fall. She writes a beautiful letter. (T.S.R. 42. 2 P.M. 62. S.S. 54.)

Mar. 1. Mon. Received letter from Ada and wrote to Eureka. Hannah is still in bed. Aunt Susie is reported as being considerably improved. Also received letters from Willie and Theresa. We learn of the death of Mrs. Marsey Brier, widow of John W. Brier, at Lodi, a little over a year often her husband's death - is to be buried tomorrow. (T.S.R. 39. 2 P.M. 55. S.S. 50.)