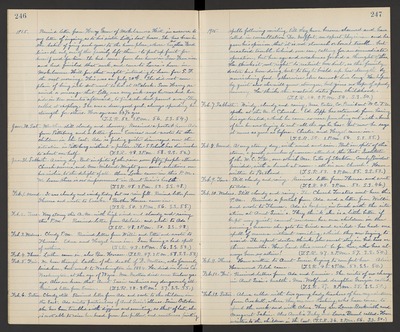 1915. Received letter from Harry Greve of Mokelumne Hill in answer to my letter for inquiry as to his sister Lilly's last hours. She has been in the habit of going each year to the home place, where her mother Fred lives - the only me of the family left then - to put up fruit for herself and for him. She had come from her home in San Francisco and had finished that work, and come to Laura's home in Mokelumne Hill for that night intending to leave for S.F. the next morning. This was on July 20th. She did not complain of being sick but went to bed at 10 o'clock. Soon Harry received a message that Lilly was very sick - says he reached her side in ten minutes afterward, to find she had passed away. They called at apoplexy. She was a dear, good girl, always spending her strength for others. Her age was 52 1/2 yrs (T.S.R. 52. 2 P.M. 56. S.S. 54.)

Jan. 30. Sat. Weather still cloudy and showery. Received a postal from Ada from Pittsburg and a letter from Eunice and wrote to the children in the East. Ada is feeling quite discouraged over the situation in Pittsburg without a pastor. The S. School has diminishes to about one-half. (T.S.R. 48. 2 P.M. 58. S.S. 52.)

Jan. 31. Sabbath. A rainy day. But in spite of the rain some fifty people attended Church services, and Mrs. Mildred Wright gone come selections on her violin, to the delight of all. Alma Locke came in this P.M. We learn there is no improvement in Aunt Susie's health. (T.S.R. 48. 2 P.M. 52. S.S. 48.)

Feb. 6. Satur. Cloudy still Received letter from Ada and wrote to the children in the East. Ada writes particulars of Aunt Susie's illness. Since October she has been troubled with dizziness and vomiting, so that of late, she is not able to raise her head from her pillow, and sometimes fainting

1915. spells following vomiting, till they have become alarmed and have called in consultation Dr. Moffat, an expert physician and he gave his opinion that it is not stomach or bowel trouble, but mastoid trouble behind one ear, calling for an immediate operation, but her age and weakness forbid a thought of this. He thinks it not right to restrict her diet, as the family doctor has been doing, but to try to build up her strength by nourishing food - otherwise she cannot live long. He hopes by quiet also she will grow stronger, but gives no hope of speedy recovery. He thinks the mastoid dates from childhood. (T.S.R. 44. 2 P.M. 54. S.S. 50.)

Feb. 10. Wednes. Still cloudy and rainy. The Church Trustees met here this P.M. Received a postal from Ada and a letter from Willie and wrote to Theresa. Ada is keeping in touch with the situation at Aunt Susie's. They think she is a little better if kept very quiet, cannot see even her own children in the evening, because she gets too tired and excited - has had one spell of nausea without vomiting, which they are trying to avoid. The expert doctor thinks she must stay in bed two or three months. How hard this must be for her, who had always been so active! (T.S.R. 47. 2 P.M. 57. S.S. 50.)

Feb. 13. Satur. Alma called with two young lady teachers of her acquaintance form Crockett, where they are now teaching, who have come to spend the week-end with Alma. They are Laura Beckwith and Margaret Sabin. Also Amelia Daley and Laura Bruml called. Have written to the children in the East. (T.S.R. 36. 2 P.M. 56. S.S. 50.)