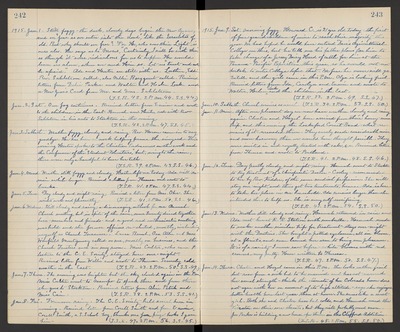 1915. Jan. 1. Still foggy - the dark, cloudy days begin the New Year, and we "fear as we enter into the cloud", like the Israelites of old. But why should we fear? For He, who was their Light, is ours also. He says as to Moses, "Certainly I will be with thee", as though it were ridiculous for us to suppose He would leave us alone, when we need Him so. Let us "trust and not be afraid". Ada and Hester are still with us. Luther, Eddie Rev. Sahlstrom called, also Nellie Bergquest called. Received letters from Delia Parker and Walter and Helen Locke and a New Year's Card from Mr. and Mrs. Shalstrom. (T.S.R. 42. 2 P.M. 44. S.S. 44.)

Jan. 3. Sabbath. Weather foggy, cloudy and rainy. Bro. Horace came in to say goodbye. He has been at work helping prune the vineyard. This evening Hester spoke to the Christian Endeavours on the work and the Conference of the "Student Volunteers", but, owing to the rain, there were only a handful to hear her talk. (T.S.R. 39. 2 P.M. 43. S.S 46.)

Jan. 6. Wednes. Still cloudy and rainy - a discouraging outlook for our Annual Church meeting but in spite of the rain, some twenty dined together here members and friends - and a good and enthusiastic meeting was held and the former officers re-elected, mostly, including myself as Church Treasurer. Laura Bruml, Ora Allen and Mrs. Winfield Montgomery called on me, mostly on business, and the Church Trustees met in my room. Miss Culter, who came to lecture to the C.E. Society stayed here over-night. Received letter from Willie and wrote to Theresa. Severely cold weather in the East. (T.S.R. 43. 2 P.M. 50. S.S. 49.)

Jan. 7. Thurs. The morning was brighter but the sky clouded again in the P.M. Miss Culter went to Acampo to speak there and from there she goes to Stockton. Received letters from Alice Petch and Miss Cain. (T.S.R. 38. 2 P.M. 53. S.S. 41.)

1915. Jan 9. Sat. Morning foggy. Howard C. is 21 yrs. old today - the first of four grand children of mine to reach their majority this year. We had hoped he would have entered Davis Agricultural College ere this, but he tells me his father plans for him to take charge of a Jersey Diary Herd of cattle for him at the Panama - Pacific Exposition, this year, so he would not undertake to enter college before that. We fear he never will go. Estelle and the girls come in this P.M. Olga is looking frail. Received letters from Ida, Carolyn and Eunice and wrote to Walter, Helen Locke and the children in the East. (T.S.R. 33. 2 P.M. 49. S.S. 47.)

Jan. 11. Mon. After one pleasant day we now have weather cloudy and rainy again. Chester and Hazel have arrived from their honey-moon trip, and this evening the Lockeford Cornet Band - what remains of it - serenaded them. They surely made considerable noise and more harmony than we would have thought possible. They were invited in the royally treated with cake, D.C. Received letter from Theresa and wrote to Portland. (T.S.R. 41. 2 P.M. 48. S.S. 46.)

Jan. 12. Tues. Day partly cloudy and night rainy. Hannah went to Stockton to try treatment of a Chiropractic Doctor - Cooley - recommended to her by Rev. Kidder, of the same medical profession. She will stay over-night, and thus get two treatments, because Ada is here to take her place in our household. Ada remains longer than she intended thus to help us. She is very self-sacrificing. (T.S.R. 41. 2 P.M. 54. S.S. 50.)

Jan. 13. Wednes. Weather still cloudy and rainy. Hannah returned in rain and Ada met her at R.R. Station with umbrella. Hannah needs to make another similar trip for treatment - stays over-night with the Dustins. She bought a potted cyclamen, all in bloom, at a florist's, and even lamed her arm to bring me pleasure. It is of a variety I never saw before - white blooms with red crowns very pretty. Have written to Theresa. (T.S.R. 47. 2 P.M. 50. S.S. 47.)

Jan. 14. Thurs. Chester and Hazel came in this P.M. She looks rather frail but rose from a sick bed to be married and has not recovered her usual strength - thinks the climate of her Colorado home does not agree with her on account of its high attitude - says she enjoyed better health here last year than at home. She seems like a sweet girl. Both she and Chester have bad colds, and Hannah used the Vibrator on their sore throats, but they will probably need more. Joe Parker is building a new house for them in the Clifford Addition. (T.S.R. 45. 2 P.M. 55. S.S. 50.)