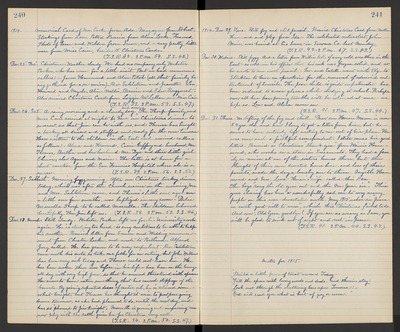 Dec. 25. Fri. Christmas. Weather cloudy. We had no company only Webster Parker, who has come for a little visit. But we had numerous callers! - James Hammond and Alice Pitch (all that family being gathered for a re-union), Rev. Sahlstrom and Jeanette, Lou, Howard and Myrle, Alice, Nellie, Bernice and Edw. Bergquest. Also received Christmas Cards from Lizzie McLellan and Miss Cain (T.S.R. 33. 2 P.M. 53. S.S. 47.)

Dec. 26. Sat. A rainy morning and a cloudy day and evening. The Thorp family and Miss Cain arrived at night to have our Christmas dinner tomorrow, so that Jim can be with us, and Theresa has brought a turkey all dressed and stuffed and ready for the oven tomorrow. Have written to the children in the East, and received callers as follows! - Alma and Howard, Carrie Geffroy and husband, Mr. Thomas, Bertha and her husband. Mr. Dye and their little girl Elinor, also Agnes and Marie. The letter is at home for a short vacation from the San Francisco Hospital where she is a nurse. (T.S.R. 39. 2 P.M. 56. S.S. 50.)

Dec. 27. Sabbath. Morning foggy morning. After our Christmas turkey dinner today, which was after the Church service in the morning, Mr. and Mrs. Sahlstrom came, and Theresa's little one, aged now a little over five months, was baptized in my room - Delia Marcella Thorp - to be called Marcella. The children behaved beautifully. Then Jim left us. (T.S.R. 38. 2 P.M. 53. S.S. 46.)

Dec. 28. Mond. Still cloudy. Webster Parker left us for his University work again. He is studying too hard - is very ambitioUs to be able to help his mother. Received letter from Eunice and Wedding announcement from Chester Locke, and wrote to Portland. Alfred Jory called. He has grown to be very corpulent. Rev. Sahlstrom came with his auto, to take our folks for an outing, but John Willard has been very sick today and Theresa could not leave him. He has been sicker than ever before in his life - has been on the lounge all day with very high fever, so that he seemed threatened with spasms. He seems to have eaten something that has caused stoppage of the bowels. By giving repeated to doses of castor oil, he is relieved somewhat tonight, but Theresa has thought it wise to postpone going home tomorrow, as she had planned to do, until the next day, and has so 'phoned to Jim tonight. Marcella is growing and improving - can now play with the rattle given her for Christmas, very well. (T.S.R. 34. 2 P.M. 50. S.S. 47.)

Dec. 30. Wednes. Still foggy. And a letter from Willie tells of very cold weather in the East - so cold in his office that his ink was frozen solid, and so he wrote to me with pencil. Geo. and Estelle went with Olga to Stockton to have an operation for the removal of adenoid and treatment of tonsils. The poor child is quite unfortunate - has been ordered to wear glasses while studying at school. Perhaps now all her pampering troubles will be relieved at once - we hope so. Lou and Alma came in. (T.S.R. 41. 2 P.M. 47. S.S. 44.)

Dec. 31. Thurs. No lifting of the fog and chill. Dear son Horace Mann is now 54 yrs. old, and how I long to get a letter from him, but he seems to have entirely left writing to me out his plan. He was once such a faithful correspondent. I still miss his good letters. Received a Christmas "thank-you" from Winnie Hammond, who works in a store in Sacramento. They had a family re-union at one of the sisters' home there, but the thought of their own deserted home here, and loss of their parents, made the day a lonely one to them. Myrtle Hammond and Mrs. Lena - Horace's wife - called this P.M. The boys "rang the old year out and the New Year in". This year closing has been a wonderfully sad me to very many people on this war - devastated earth. May 1915 usher in peace on earth - good - will to men", which this Christmas failed to do. And now, Old Year, goodbye! If you are as weary as I am, you will be glad to sink out of sight and rest in peace. (T.S.R. 41. 2 P.M. 44. S.S. 43.)

"Build a little fence of trust around Today. "Fill the space with loving words and deeds, and there is a stay! "Look not through the sheltering bars upon Tomorrow!. "God will send you what is best of joy or sorrow".