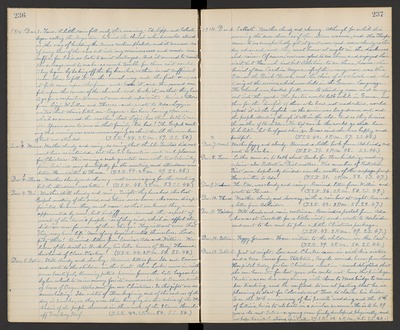 1914. Dec. 1. Tues. A little rain fell early this morning. Ed. Lippe and Celeste began cutting the large tree behind the church which would stand in the way of building the Annex contemplated, and it seemed as if every blow of the axis cut into my consciousness and made me suffer, for I did so hate to see it destroyed. And it seemed to resend the outrage, and to make as much trouble for them as it could. They began by taking off the big branches, as there is not sufficient room there to fell it in the usual way, and the first one, as it fell, came upon the fence and broke it, and the second one fell upon the corner of the church and broke it, so that they had to go for a carpenter to come at once and repair it. Received letters from Lizzie McLellan and Theresa and wrote to Ada. Lizzie writes that Alice little one - Eugene - has been having spasms, which so unnerved the mother, that Lizzie has them both to care for. Spasms seem to run in that family - too bad! The Gospel meeting this evening was more encouraging, as about double the number of last eve. attended (T.S.R. 44 2 P.M. 57. S.S. 50.)

Dec. 2. Wednes. Weather cloudy and rainy, so rainy that the Ch. Trustees did not meet here as intended, but the S.S. Executive met and planned for Christmas. This evening, a male quartet came with Rev. Schwimlay from Lodi, and sang beautifully for the meeting, and attendance was better. Have written to Theresa. (T.S.R. 44. 2 P.M. 49. S.S. 48.)

Dec. 4. Fri. Weather still cloudy and rainy. Tonight they have had the last Gospel meeting of the services, and there were come who were disappointed because they must cease, so that we know they were appreciated by some, but indifference seemed the aspect of most of the town's people - as if they said, which in effect they did - "we care for none of these things". They will not come that "they may have life". None of any boys interested themselves. Lord, pity them! Received letters from Eunice, Ada and Willie. We learn of the death in Berkeley, his later home, of Benj. Thomas, husband of Clara Starkey. (T.S.R. 44. 2 P.M. 51. S.S. 48.)

Dec. 5. Satur. Still cloudy and showery. Received letters from Ida and Eunice and wrote to the children in the East. Alma Locke came in with some beautiful, blooming potted pancies, from the late bazaar held by her school to raise money for its necessaries. And Eunice writes of boxes of Oregon Apples sent of our Christmas. So the gifts are accumulating. Ida writes of Thanksgiving, and of the sadness of the day in Eureka, as they were then bringing in the bodies of the 30+ bodies of the people drowned in the wreck of the Steamer Hanale's off Duxbury Reef. (T.S.R. 42. 2 P.M. 54. S.S. 50.)

1914. Dec. 6. Sabbath. Weather cloudy and showery. Although for while this morning the sun shone as if the storm was over, and the Thorps came to us unexpectedly, yet it grew more and more cloudy as the day advanced, and they went home at night in the darkness and rain. Of course, we were glad to see them and enjoyed their visit, but Hannah had but little time to see them, because the burial of Mrs. Carolina Meyers, wife of the winery man, was this P.M. at the Brick Church, and the choir of our church was asked to sing at the services, which were held in the German language. The church was packed full, events standing room and away. out into the yard. The pastor would talk awhile in German, and then for the benefit of those who had not understand, would repeat it in the English - so the services was long-drawn out, and the people standing through it all in the cold. And so they buried the mother of 16 children. The text was "In the world ye shall have tribulation, but be of good cheer". D.C. It was said she was happy and truthful. (T.S.R. 42. 2 P.M. 57. S.S 48.)

Dec. 8. Tues. Luther came in to talk about tanks for Store building - needing repairs - also Protection Dist. matters. The members of Protection Dist. seem hopelessly divided over the matter of the seepage pump. Have written to Ada. (T.S.R. 31. 2 P.M. 52. S.S. 47.)

Dec. 13. Sabbath. Just at night, Lou and Chester came in with his sisters and a Mrs. Eames from Stockton. Myrle arrived home from Lane Hospital today for her Christmas vacation - much delighted that she can have it, for last year she could not have the privilege. Chester was on his way driving with Alma to Woodbridge to resume her teaching, and the confident to me at parting that he is planning to start for Colorado next Tues. to claim his bride. So on the 30th anniversary of his parents' wedding and the 5th of Lottie's, he is to celebrate in a similar manner. He is to be 29 years old next Satur - a young man finely developed physically, and we hope he will be strong spiritually. (T.S.R. 30. 2 P.M. 45. S.S. 42.)