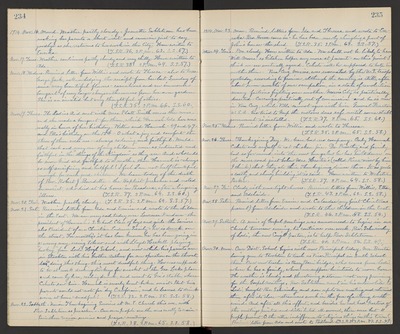 Nov. 18. Wednes. Received letter from Willie and wrote to Theresa also to Mrs. George Jack, acknowledging the receipt from her last Sunday of some very beautiful flowers, carnations and an immense bouquet of very large chrysanthemums from her own garden She is an invalid but very thoughtful of others. (T.S.R. 35. 2 P.M. 66. S.S. 60.)

Nov. 19. Thurs. The Ladies Aid met with Mrs. Platt Smith across the river and she made a bouquet for them, which Hannah told her was really in honor of her birthday. Willie and Hannah - 49 and 47 - and Etta's birthday on the 13th - O what a joy and comfort the three of them are to me always - so loving and faithful. Would that each and every one of any children were as interested and faithful in the "things of the Kingdom" as they are. And who could be more kind and faithful to a mother than Hannah is - always so self-sacrificing and helpful! I feel I am not half thankful enough for such good children. We learn today of the death of Rev. Robert J. Burdette - the Baptist preacher and noted humorist, who died at his home in Pasadena, after a lingering illness. (T.S.R. 37. 2 P.M. 64. S.S. 60.)

Nov. 21. Sat. Received letters from Ada and Eunice and wrote to the children in the East. We are very sad today over Lawrence Knudsen - the president of Hannah's S. School Class of boys and girls, the Seniors, also President of our Christian Endeavor Society, he is drunk on the street. For months it has been known he has been going on wrong way, using tobacco and with Lloyd Haskell playing "hookey" from Lodi High School, and now while his parents are in Stockton with his brother Arthur for an operation on the throat, he is doing this thing, this most dreadful thing. He was supposed to be at work dressing turkeys for market at the Geo. Locke place and came by here, reeling drunk, and went to Geo.'s stable, where Celeste saw him. Hannah is nearly heart-broken over it. But his parents would not vote for "dry California", and he learned to drink wine at home - dreadful! (T.S.R. 32. 2 P.M. 35. S.S. 58.)

Nov. 22. Sabbath. Union Thanksgiving Services at M.E. Church this eve, with Rev. Sahlstrom as preacher. Our people are the ones mostly to maintain these Union services and prayer meetings. (T.S.R. 38. 2 P.M. 65. S.S. 58.)

Nov. 24. Tues. P.M. cloudy. Have written to Ada. We shall not be likely to have Will Moore as kitchen helper any more at present - on this point I think we are mutually agreed. Celeste will be supposed to help his mother there. Vera Cruz, Mexico, was evacuated by the W.S. troops yesterday, according to promise, although the country is still, after about seven months of our occupation, in a state of revolution many factions fighting one another. Mexico City is practically deserted - Carranza practically out of commission - and he is now in Vera Cruz, while Villa cannot agree with him. General Funston W.S.A. has tried to keep the customs dues safe until some stable government is installed. (T.S.R. 37. 2 P.M. 65. S.S. 60.)

Nov. 26. Thurs. Thanksgiving Day. We have had no company. Only Hannah Celeste and myself to eat chicken pie. Dr. Priestly and family had so far moved into the new bungalow he has built down on the river road just below Mrs. Hunter's (called River-view by him I think) that they ate their Thanksgiving dinner there. It is quite a costly and showy building, it is said. Have written to Webster Parker. (T.S.R. 37. 2 P.M. 64. S.S. 58.)

Nov. 30. Mon. Our Dist. School begins with new Principal today, Mr. Banta having gone to Stockton to teach as Vice-Principal in South School there. Our new teacher is Barry Bainbridge, who comes from Lodi, where he has a family, whom we suppose he intends to move here. The weather is cloudy and threatening a storm, not very promising for the Gospel Meetings, Rev. Sahlstrom went in his automobile to Lodi, brought Rev. Schwimley and son up to our meeting and returned them after its close strenuous work in the face of a strong south wind. And after all this effort, and besides he had had pastors of the meetings printed and distributed all around, there were but 11 people present. O the utter indifference to religious things in this town! Received letter from Ada and wrote to Portland. (T.S.R. 35. 2 P.M. 53. S.S. 49.)