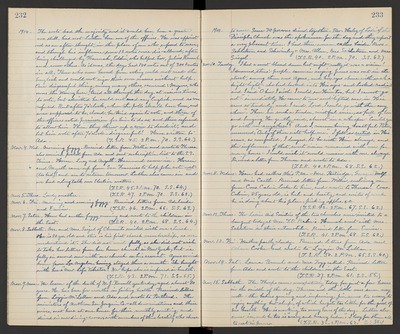 1914. The wets had the majority and it would have been a greater once still, had not Luther been one of the officers. He was appointed as an after thought, in the place of one who refused to serve, and through his influence some 12 votes were disallowed, after being challenged by Hannah, Eddie, who helped her, Julius Bruml and some others. As it was, the days had 140 votes out of 300 + votes in all. Those who were barred from vote could not read the English and could not sign their own names without help. One disgraceful thing, among many others, recurred. Mayors, who owns the Winery here, tried all through the day, at various times, to vote, but admitted he could not read any English, and so was refused. But after 7 o'clock, when the polls should have been, and were supposed to be, closed, he tried again to vote, and thru of the officers voted permission for him to do so, and three refused to allow him. Then they threw up a coin to decide it, and let him vote after 7 o'clock, disgraceful! Have written to Ada. (T.S.R. 45. 2 P.M. 70. S.S. 64.)

Nov. 4. Wed. Morning foggy. Received letter from Willie and wrote to Theresa also received postal from Ada and sent subscription list to the S.S.. times, Horace, Lucy and Myrtle Hammond came in. Horace and Myrtle came up from San Francisco to help John vote wet (too bad)! and are to return tomorrow. Luther also came in and we had a long talk over Election matters. (T.S.R. 45. 2 P.M. 70. S.S. 64.)

Nov. 9. Mon. We learn of the death of W.J. Russell yesterday, aged almost 80 years. He has been for months in failing health. Received letters from Lizzie McLellan and Ada and wrote to Portland. The ministers of Mathew San Joaquin Co. all denominations and their wives, met here at our house for their monthly meeting, and dined in our dining room, with numbers of this locality who chose

1914. to come. Some 30 persons dined together. Rev. Haley of Lodi of the Disciples Church was the spokesman for the day and they report a very pleasant time. I had three women callers besides Rev. Sahlstrom and Schwinley. Mrs. Allen, Mrs. Sahlstrom and Mrs. Siegel. (T.S.R. 40. 2 P.M. 70. S.S. 63.)

Nov. 10. Tuesday. I had a most blessed dream last night, really it was a vision! I dreamed thus, people came in saying Jesus was out in the street, among them was Agnes, and her eyes shone with such a bright light she lead looked into His eyes and looked radiant and I said "O how I wish I could see Him too, but I cannot go out" immediately He came to me and lifted me in His arms so tenderly, and I said, "Lord, I could go with this any where." Then in such a tender, wistful voice, so full of love and longing He gently said, almost in a whisper. "Could you go with me anywhere?" And I remembering boastful Peter, answered, "Only if thou will help me." I felt so rested in His arms, so comforted, I longed to be with Him always, and the influence of that sweet vision remained with me for many hours. I could wish it would remain with me always. Received a letter from Theresa and wrote to Ada. (T.S.R. 40. 2 P.M. 68. S.S. 62.)

Nov. 15. Sabbath. The Thorps came unexpectedly today for just a few hours in the middle of the day. Theresa and the little ones seem very well, the babies growing and improving. Jim seems too weary to enjoy anything but sleep, of which he gets too little for the good of his health. He is working too many hours of the day. Luther also came in, and he too is "weary and heavy laden", I long for them all to rest in Jesus. (T.S.R. 32. 2 P.M. 62. S.S. 56.)