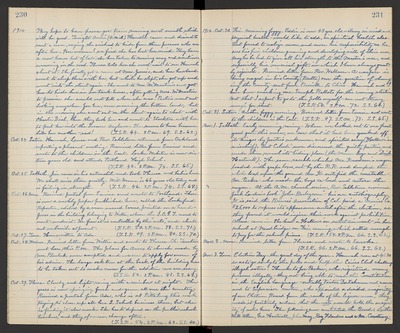 1914. They hope to have passenger trains running next month, which will be good. Tonight Annie (O'Niel) Hendle came and desired to rent a room, saying she wished to hide from three persons who are after her, Poor woman! we find she has lost her mind. They have a new house but of late she has taken to running away and sometimes screaming in the road. Theresa told her she must wait to see Hannah about it. She finally got a room at Mrs. Jones's, and her husband went to sleep there with her, but while he slept, she got up and went into the street again. She went to Mrs. M Martin's and got her to hide her in her tank-house, after getting Mrs. McMartin to promise she would not tell where she was. Parties went out looking every where for her, even scouring the bottom land, but in the morning she went out on the street again to chat with Charlie Dial, then they took her and went to Stockton with her to put her into the Insane Asylum. She seems to have become like her mother - sad! (T.S.R. 44. 2 P.M. 69. S.S. 62.)

Oct. 26. Mon. Received postal from Eunice and wrote to Portland. There is now a weekly paper published here, called the "Lockeford Reporter, edited by a man named Evans, printed on a handpress in the building belonging to Willie, where the I.O.G.T. used to meet - under it. We fear it is controlled by the "wets", and shall not subscribe at present. (T.S.R. 50. 2 P.M. 78. S.S. 71.)

Oct. 28. Wednes. Received letter from Willie and wrote to Theresa. Ch. Trustees met here this P.M. The plans for Annex to church made by Mr. Plachek were accepted and we are to apply for more of his advice. The large oak tree at the back of the building has to be taken out to make room for the addition - we are sorry. (T.S.R. 52. 2 P.M. 81. S.S. 68.)

Oct. 29. Thurs. Cloudy and light rainy with a rainbow at night. The grass is now springing fresh and green all over the country. Received a postal from Ada, who is at Pittsburg this week trying to close up all her S. School business there, but she is finding it slow work. She has to depend on the public school teachers, and they of course, change often. (T.S.R. 54. 2 P.M. 62. S.S. 60.)

1914. Oct. 30. Fri. Morning foggy. Eddie is now 43 yrs. old. strong is mind and physical health would like to add, in spiritual health also. But forced to realize more, and more his responsibility as he sees his five children growing and developing wells of their own. Maybe be led to give all his strength to the Master's use, and especially his musical gift, in which I have always greatly rejoiced. Received letter from Rev. Wallace. A warfare is being waged in his County (Butte) over the question of changing the county-seat from Oroville to Chico. Hannah and I have been marking over Sample Ballots for the coming election. Not that I expect to go to the polls myself - am not strong enough for that. (T.S.R. 54. 2 P.M. 72. S.S. 64.)

Nov. 1. Sabbath. Early morning rainy. When we looked out to our front yard gate this morn, we saw that it had been yanked off its hinges by parties unknown, and spirited away (Hallowe'en mischief). But Celeste soon discovered the guilty parties, and made them reveal its hiding place (the Miner bags and Dick Hartwell). The same rascals wheeled Mr. Knudson's wagon loaded with grape boxes, out by the R.R. and dumped the whole load upon the ground. Mr. K. notified the constable. Mr. Parker - who made the boys re-load and restore the wagon. At the A.M. church service, Rev. Sahlstrom received Jack Landon's book - "John Barleycorn" - his own autobiography. It is said the Brewers' Association of Cal. paid a "Movies Co". $25,000 to repress its appearance until after the election, as they feared it would injure their work against prohibition. Alma came in. She had a Hallowe'en entertainment in her school and Woodbridge on Fri. evening which netted enough to pay for the school piano. (T.S.R. 54. 2 P.M. 66. S.S. 62.)

Nov. 3. Tues. Election Day, the great day of the year. Hannah rose at 4:30 so as to go early to the polls and help the Civics Club challenge illegal voters. Thanks to Joe Parker, who registered many persons illegally, they not being able to read the Constitution in the English language - notably Victor Dutchmen and women and to Supervisor Newton, who appointed a decided majority of our Election Board from the ranks of the liquor men, they made it positively certain that the wets would hold the majority of votes here. The following men constituted the Board. Luther Will Allen, Geo. Hartwell, John May, Roy Flanders and a Mr. Courtney.