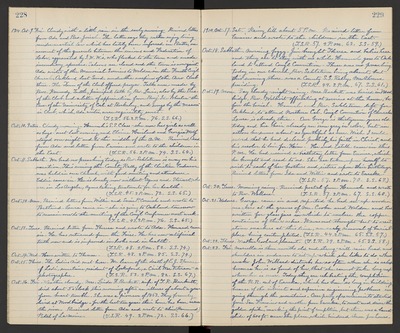 1914. Oct. 19. Fri. Cloudy with a little rain in the early morning. Received letters from Ada and Bro. Josiah. The letter says they rather enjoy living under martial law which has lately been enforced in Butte, on account of the quarrels between the unions and Federation of Labor, aggravated by I.W.W.'s, who flocked to the town and made incendiary speeches. Saloons are closed and the town is now quiet. Ada writes of the Memorial Services to Weldon in the Fourth Cong'l Church, Oakland last Sund. under the auspices of the Aero Club there. The Dean of the Club offered prayer. Talks were made by Revs. Kennedy, Tuttle, principal talk by Rev. Lewis, also by the Pres. of the Club, and a letter of appreciation from Benj. Ide Wheeler, the Pres. of the University of Cal. at Berkeley, and songs by the Mason is Club, which, Ada writes, were exquisitely sweet. (T.S.R. 56. 2 P.M. 76. S.S. 66.)

Oct. 10. Satur. Cloudy morning. Hannah's S.S. Class, she now has girls as well as boys - meet last evening, and Elvira Haviland and Georgia Wolf stayed over night and to the middle of the A.M. Received Card from Ada and letter from Eunice and wrote to the children in the East. (T.S.R. 56. 2 P.M. 74. S.S. 64.)

Oct. 11. Sabbath. We had no preaching today as Rev. Salhstrom is away on his vacation. This evening the County Rally of the Christian Endeavor was held in our Church, with good meeting and attendance. Eddie came in. He is lonely now without Agnes and Stewart, who are in Los Angeles, Agnes taking treatments for her health. (T.S.R. 45. 2 P.M. 72. S.S. 65.)

Oct. 16. Fri. Weather cloudy. Mrs. Linda F. Burkett, wife of T.R. Burkett, died about 5 o'clock this morning after an illness of about a year from heart trouble. She was a pioneer of 1853. They formerly lived at Woodbridge, for the last ten years their home has been across the river. Received letter from Ada and wrote to Alice (Hammond) Petch of La Moine. (T.S.R. 49. 2 P.M. 72. S.S. 66.)

Oct. 18. Sabbath. Morning foggy. Jim brought Theresa and babies here and they are to stay with us while Hannah goes to Oakland to attend Cong'l Convention. There was no preaching today in our church, Rev. Sahlstrom being absent, but this evening there was a county S.S. Rally, Mrs. Ahrens presiding. (T.S.R. 44. 2 P.M. 67. S.S. 61.)

Oct. 19. Mon. Day cloudy, night rainy. Mrs. Burkett was buried in Woodbridge, Rev. Wilhoit, officiating at services at the house, before the burial. Hannah and Rev. Sahlstrom left for Oakland to attend Northern Cal. Cong'l Convention of Church Laura is already there. Our George is thirtyseven years old today and his hair already an iron grey in color, but in actions he seems about as youthful as ever. Wish I could record the he had declared publicly his faith in Christ, and his resolve to live for Heim. He and Estelle came in this P.M. He had received a birthday letter from Eunice, which he brought and read to us. She has taken upon herself to write to each of her brothers and sisters upon their birthdays. Received letters from Ida and Willie and wrote to Eureka. (T.S.R. 57. 2 P.M. 70. S.S. 63.)

Oct. 21. Wednes. George came in and reported he had set up wooden markers at the graves of Mr. Cooke and Weldon and has written for glass jars in which to enclose the copper containers of their ashes. It was not thought best to erect stone markers at this time, an early removal of burial place being contemplated. (T.S.R. 44. 2 P.M. 65. S.S. 57.)

Oct. 23. Fri. Marcella is three months old and strong will raise head and shoulders in endeavor to sit up which she likes to do when awake. John Willard disturbs her so often when she is asleep because he is so fond of her, that she cannot take long nap when he is near. Today they are celebrating the completion of the R.R. out of Eureka, which has been so long in building because of the intricate and expensive engineering problems in going through the mountains. One party of excursionists started from San Francisco and another from Eureka, to meet and drive the "golden spike", marking the print of completion, but there was a landslide of 600 ft. near the place, which kindered them for hours.