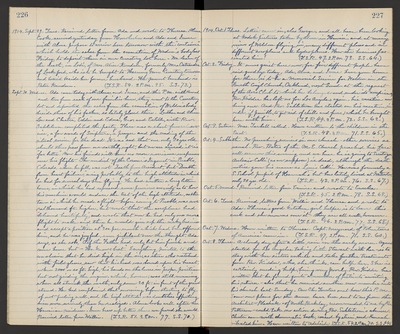 1914. Sept. 29. Tues. Received letter from Ada and wrote to Theresa, Alma Cooke arrived yesterday from Honolulu and Ada and Irene with Alma propose to arrive here tomorrow with the "container" which holds the ashes from the cremation of Wedon's body last Friday, to deposit them in our Cemetery lot here. We learn of the death, in Lodi, of Mrs. Alice Knudsen, formerly Mrs. Ostrander of Lockeford, who is to be brought to Harmony Grove Cemetery tomorrow and buried beside her former husband. How present husband is Peter Knudsen. (T.S.R. 54. 2 P.M. 85. S.S. 73.)

Sept. 30. Wednes. Ada came today with Alma, and Irene, and this P.M. with Hannah and two from each of our families here, they went to the Cemetery lot and deposited the ashes from the cremation of Weldon's body beside those of his father, so lately placed there. Luther and Alice Lou and Chester, Eddie and Edna, Geo. and Estelle, with Rev, Salhstrom completed the party. There was a short funeral service, a few words of Scripture, a prayer and the reading of the ritual service for the dead. It was sad that one only 30 yrs. old should these pass from our earthly sight, but we are assured it is "for better". Now his friends will have no more wocrisma susfrences over his flights. The verdict of the Coroner's Inquest in Pueblo, Colorado, where he fell, was not "Death from Accident", but "Death from heart failure", owing probably to the high attitude in which he had for several days been flying. He had written a long letter home, in which he had expressed some previous anxiety as to how his machine would endure the test of the high attitude, as the town in which he made a flight before coming to Pueblo, was several thousand ft. higher, but wrote that the aeroplane had "behaved beautifully", and wrote that now he had only more flight to make and then he would give up the risky business and accept a position at $300, per month which had been offered him, and he was joy feel, even jubilant over the thought. Ada says, as she sobs, "O if the Father had only let him finish and come home but. He knows best." Everything pointed to the conclusion that he died high in the air, as those who watched with field glasses, saw that his head was bowed upon his breast, when 2000 or so ft. high, his hands on the levers in proper position but not guiding the engine, which, however, was still running when all struck the earth, only some 20 ft. in front of the grand stand. He had complained that morning before starting to fly, of not feeling well, and the high attitude was doubtless affecting him more seriously than he realized. Alma looks well after her Hawaiian residence. Irene bears up better than we feared she would. Received letter from Willie. (T.S.R. 51. 2 P.M. 77. S.S. 70.)

1914. Oct. 1. Thurs. Lottie came in, also George, and all have been looking at Kodak pictures taken by Alma in Hawaii, and at many views of Weldon flying in many different places and in different aeroplanes and hydrophones. How the business fascinated him! (T.S.R. 47. 2 P.M. 73. S.S. 64.)

Oct. 2. Friday. It seems quiet here now, for five different people have said goodbye today. Ada, Alma and Irene have gone home for there is to be a Memorial Service for Weldon in the Fourth Cong'l Church, Oakaland, next Sund. at the request of the Aero Club to which he belonged and under its auspices. Rev. Kidder has left us for Los Angeles again, his vacation now being over. And Rev. Sahlstrom has started on his vacation, in order, if possible, to get rid of chill and fever, which he brought here with him. (T.S.R. 44. 2 P.M. 72. S.S. 62.)

Oct. 4. Sabbath. No preaching services in our church, other services as usual. Rev. Bates of the M.E. Church preached his farewell sermon this evening and we hear he is going to Saratoga Antonio Celli (as we suppose) is dead, although the death notice gave his name as Louis Celli. He was formerly a S. School pupil of Hannah's but has lately lived at Waterloo only 20 yrs. old. (T.S.R. 42. 2. P.M. 76. S.S. 67.)

Oct. 8. Thurs. A cloudy day, after a little rain in the early morn. Agnes started for Los Angeles taking little Stewart with her is to stay with her sisters awhile and take further treatments from Rev. Kidder, who, she thinks, can help her. She is certainly needing help, being very poorly. Rev. Kidder has written that he found quite a number of patients awaiting his return, also that he received another new member into his church last Sunday. Our Ch. Trustees met here this P.M. Some new plans for the Annex have been sent to us from the Architect - Plachek - of North Berkeley, recommended to us by Rev. Patterson could take no action during Rev. Sahlstrom's absence. Chester came with rheumatic back, caused by strain, and Hannah vibrated him. Have written to Adelaide. (T.S.R. 54. 2 P.M. 70. S.S. 64.)