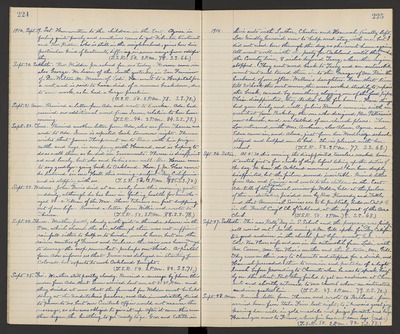 Sept. 22. Tues. Received another letter from Ada, also one from Theresa and wrote to Ada. Irene is expected back tomorrow night. Theresa writes that James Thorp went on to Reno with his prize cattle and hogs, in company with Howard, and is hoping to do as well there as he did in Sacramento. Theresa is disappointed and lonely, but she and babies are well. Bro. Horace came to say goodbye, going back to Oakland. Hon. J.M. Glass came he lectured in our Hall this evening, subject. "Dry California. and is stopping with us. (T.S.R. 52. 2 P.M. 85. S.S. 72.)

Sept. 23. Wednes. John Davis died at an early hour this morning, quite suddenly, although he has been in failing health for months, aged 80, a Veteran of the War. These Veterans are fast dropping out of our life. Received a letter from Willie and wrote to Theresa. (T.S.R. 52. 2 P.M. 88. S.S. 78.)

Sept. 24. Thurs. Weather partly cloudy with quite a thunder shower in the P.M. which cleared the air, although there was not sufficient rainfall either to help or to hinder much here, but in the raisin counties of Fresno and Tulare the rain was heavy enough to damage the crop somewhat, perhaps one-third. A postal from Ada informs us that Irene was delayed in starting from Colorado, but expects to reach Oakland tonight. (T.S.R. 54. 2 P.M. 82. S.S. 71.)

Sept. 25. Fri. Weather still partly cloudy. Received a message by phone this morn and Ada that Irene arrived last eve at 8:30 P.M. and they decided at once that the funeral for Weldon must be held today at the Undertaker's parlors, and Ada immediately tried to phone to us, but our Central office would not answer the message, so she was obliged to give it up. After it came this morn then began the hustling to get ready to go. Geo. and Estille in

1914. their auto with Luther, Chester and Hannah finally left. Lou kindly hurried over to help and stay with me, but I did not need her through the day, so she went home again. All went well with the party for Oakland until they reached the County line, 8 miles beyond Tracy , where the engine stopped. They sent word back to Tracy and an automobile went out and towed them in to the Garage of Mr. Rice the husband of one of Rev. Wallace's daughters. From that time till 2 o'clock the next morn, the men worked steadily to repair the break, caused by something clogging one of the feed pipes. Their disappointed, they started back for home. Here things had gone lively and well. Julius Bruml came in with an architect from Berkeley, the one who designed. Rev. Patterson's new church, and we talked of our church plans. Then Lou returned with Mrs. Ambrose, also Alma, Agnes and Edna came in, and Alma, just from her Woodbridge school, stayed and helped me to bed. She is pleased with her school. (T.S.R. 52. 2 P.M. 77. S.S. 68.)

Sept. 26. Satur. At 4:30 this morning the disappointed travelers reached home to match just a few winks of sleep before taking up the duties of the day. We know the Oakland mourners must have been deeply disappointed, but the failure seemed inevitable. Received letters from Ada and Eunice and wrote to the children in the East. Ada tells of the private funeral services for Weldon, held at the parlors of the undertakers, presided over by Revs. Kennedy and Tuttley and that Memorial Services are to be publicly held on Oct. 4th in the Fourth Cong'l Ch. of Oakland, at the request of the Aero Club. (T.S.R. 50. 2 P.M. 78. S.S. 68.)

Sept. 27. Sabbath. This was Rally Day in S. school and the program was [?] well carried out. In the evening, a Mr. Gill spoke for "Dry California" to a good audience in the church. Just before sunset, here came Edw. Van Vlear, wife and son in an automobile from Lodi, with Mrs. Carver, Mrs. Van Vlear's mother and the lecturer, Mr. Gill. They were on their way to Clements and stopped for a drink, and Hannah persuaded them to come in and partake of a light lunch before proceeding to Clements where he was to speak briefly on the street. But they failed to get an audience at Clements and shortly returned to our church where an interested audience grated him. (T.S.R. 47. 2 P.M. 79. S.S. 72.)

Sept. 28. Mon. Received letter from Theresa and wrote to Portland. Jim arrived home from State Fair last night, to Theresa's great joy having done will in gold medals and prizes for cattle and hogs. Howard goes now to Fresno, where Jim has sent some hogs. (recd.) (T.S.R. 50. 2 P.M. 84. S.S. 73.)