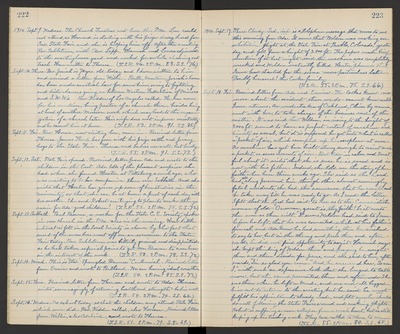 1914. Sept. 9. Wednes. The Church Trustees met here this P.M. Lou could not attend, as Howard is starting with his prize [?] heard for Sac. State Fair, and she is helping him off. After the meeting Rev. Sahlstrom, with Edw. Lipp, Hannah and Laura adjourned to the meeting house yard and worked for awhile cleaning out trash. Have written to Theresa. (T.S.R. 46. 2 P.M. 83. S.S. 76.)

Sept. 10. Thurs. Bro. Josiah is 70 yrs. old today and I have written to him and received a letter from Willie, Butte, Montana, Josiah's home has been under martial law for sometime, owing to fighting and disturbances going on between Western Federation of Miners and I.W.W.'s. Rev. Kidder of Los Angeles called. He has come for his vacation, being pastor of a church there, besides being at head of another Mission work which may lead to the organization of a church later. His wife does not improve mentally and he cannot live at home. (T.S.R. 53. 2 P.M. 91. S.S. 81.)

Sept. 12. Sat. State Fair opened. Received letter from Ada and wrote to the children in the East. Ada tells of the pleasant surprise she had when she found Hester at Pittsburg a week ago, who was waiting to be her companion there over Sabbath. And she writes that Hester has given up some of her studies in the University, so that she can be at home a part of each day with her mother. She and Robert are trying to plan to make things easier for Ada, good children! (T.S.R. 52. 2 P.M. 78. S.S. 72.)

Sept. 13. Sabbath. Paul Browne, a worker for the State C.E. Society spoke in our church in the P.M. - also in the evening. How little interest is felt in the local Society is shown by the fact that most of the menbers went off on an excursion to the State Fair today, Rev. Sahlstrom was bitterly pieved and disappointed, as he had taken especial pains to get Mr. Browne to come here in the interest of the work. (T.S.R. 52. 2 P.M. 78. S.S. 72.)

1914. Sept. 17. Thurs. Cloudy. Sad, sad is a telephone message that comes to us this morning from Ada. It seems that Weldon was making an exhibition flight at the State Fair at Pueblo, Colorado, yesterday, and fell from a height of 2000 ft. The papers made brief mention of it last night said the machine was completely wrecked and Weldon instantly killed. Hester phoned that Irene had started for the scene - more particulars later. Doubly bereaved! the Cooke family. (T.S.R. 55. 2 P.M. 75. S.S. 66.)

Sept. 18. Fri. Received letters from Ada and Eunice. The Cookes know no more about the accident than we do - cannot know until Irene returns. An undertaken of Oakland, Oliver by name, went with her, to take charge of the business end of the matter. It was said that Weldon, in rising to the height of 2000 ft. seemed to have as perfect control of machine and himself as usual, but it is supposed he got into what is called a "pocket" of air, which crumpled up his aeroplane at once. No machine has yet been built strong enough to resist such a pocket, or cross currents of air. But Ada is calm and trustful about it, writes that she is sure he is saved and is now with his father. Indeed, she told me the story of her faith when here three weeks ago. She said as the Lord had all along preserved him through other almost seemingly fatal accidents, she had the assurance that he we would not be taken away till he was ready to go. As I read the letter I felt that the Lord had said to her as to the Canaanitish woman of Old. "O woman, great is thy faith! be it unto thee even as thou wilt." It seems Weldon had said to Irene before he left, that he was converted while at his father's funeral, and Ada knew he had something then he wished to say to her, but in the strong and press then and after words, he did not find opportunity to say it. Hannah says she kept thinking of Weldon there and praying he might then and there decide for Jesus, and she said to him afterwards, "I'm so glad you came". And he answered of her, "So am I", with such an expressive look that she longed to talk more, but the crowd prevented then and afterwards. She was there when he left on Mond., and one and all begged him not to return to the aviating, but he said he must fulfill his appointments already made, and felt sure he should do well following the State Fairs around and making flights. Robert is suffering a near collapse from a weak heart, but is still keeping up his teaching work. They have called to Alma to come. (T.S.R. 55. 2 P.M. 80. S.S. 68.)