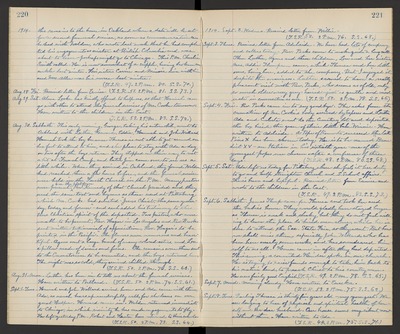 the remains to the home in Oakland where a date will be set for a second funeral service, as soon as communication can be had with Weldon, who wrote last week that he had completed his engagements as aviator at British Columbia and was about to leave perhaps might go to Chicago. This P.M. Charlie Smith called. He is now somewhat of a cripple, having broken an ankle last winter. His sisters Carnie and Minnie live with him and Mrs. Allen was his nurse last winter. (T.S.R. 47. 2 P.M. 80. S.S. 70.)

Aug. 30. Sabbath. This early morning, George, taking his automobile, went to Oakland with Luther, Howard, Eddie, Hannah and John Willard. Hannah took the boy because Theresa is not able to get around on her feet to attend to him, and she plans to stay with Ada a day or two after the boys return. They stopped on their way to rest a bit at French Camp, and later Jim came over to see us a little while. When they arrived in Oakland, they found Weldon had reached there a few hours before, and the funeral services were held in the Fourth Church in the P.M. Many pastors were present 6 on the platform. Rev. Kennedy of that Church presided and they used the same text and hymns as those used at Pittsburg, which Mr. Cooke had selected - "Jesus Christ, the same yesterday, today and forever" - and each added his testimony to the true Christian spirit of the departed. Two pastors, who were unable to be present, Rev. Hager in Los Angeles and Rev. Brooks sent written testimonials of appreciation, Rev. Hager's to be printed in the "Pacific." The flowers were numerous and beautiful. Agnes sent a large bunch of many colored asters, and Lou a pillow made of daisies and ferns. The remains wore then sent to the Crematorium to be cremated, and the boys returned home. The night was so cold, they arrived chilled through. (T.S.R. 50. 2 P.M. 76. S.S. 60.)

Sept. 1. Tues. Hannah and John Willard arrived home and Ada came with them. Ada, as usual bears up wonderfully well, for she leans on our great Helper. Howard came in. Weldon returned immediate to Chicago, in which vicinity he has made engagements to fly. He left yesterday P.M. Robert and Hester have returned to their schools. (T.S.R. 50. 2 P.M. 73. S.S. 64.)

Sept. 3. Thurs. Received letter from Adelaide. We have had lots of company and calls today. Rev. Perks came to make quite a long call. Then Luther, Agnes and three children, Lou and her sisters, Mrs. Addie Thompson came, while Theresa and her little ones, being here, added to the company. But I enjoyed it, despite the weariness. Luther seemed to have a really pleasant visit with Rev. Perks, who seems as of old, only so much older - very gray-haired - just as gentle and moderate in conversation as ever. (T.S.R. 52. 2 P.M. 78. S.S. 65.)

Sept. 4. Fri. Rev. Rev. Perks came in to say goodbye. The ashes from the cremation of Mr. Cooke's body arrived by Express and Luther Ada and Celeste went to the Cemetery lot and deposited the box inside the grave of their little babe Winnie. Have written to Adelaide. A Pope of Rome to succeed the late Pius X has been chosen today. He is to named "Benedict XV - an Italian in his sixtieth year - one of the youngest popes ever chosen after a conference of three days. (T.S.R. 48. 2 P.M. 80. S.S. 68.)

Sept. 5. Sat. Ada left us today for Pittsburg, where she feels it her duty to go and help straighten Church and S. School affairs. She is brave and hopeful. Received letter from Eunice and wrote to the children in the East. (T.S.R. 49. 2 P.M. 83. S.S. 73.)

Sept. 6. Sabbath. James Thorp came for Theresa and took her and the babies home. They would gladly have stayed longer as Theresa is weak and shaky, but they do not feel willing tp leave the place to hired men alone, while he is due to attend the Sac. State Fair, so they went. But how we shall miss them, especially John Willards, who has been here nearly seven weeks, and has so endeared himself to us all. Horace came in after they had departed. This evening, a converted Hinder spoke in our church. He is trying to raise funds enough to take him back to his native land, to preach Christ to his country men. He uses fairly good English. (T.S.R. 49. 2 P.M. 78. S.S. 65.)

Sept. 8. Tues. Darling Theresa is thirty five years old - my youngest. We are longing to hear of physical and spiritual health, of herself and her dear husband. Our house seems very silent now without them. Have written to Ada. (T.S.R. 44. 2 P.M. 75. S.S. 71.)