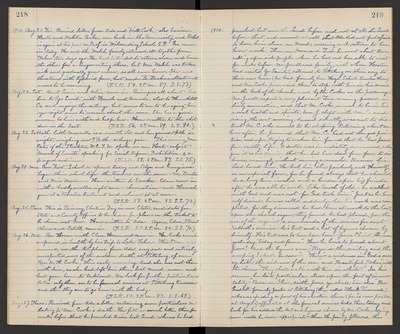 1914. Aug. 21. Fri. Received letters from Ada and Will Cooke, also Eunice. Hester and Webster Parker are back in the University and Robert is again at his past as Prof. in Wilmerding School, S.F. Geo. came in today. He and the Walsh family returned all together from Tahoe two days ago. He had intended to return alone and leave the others for a longer outing there, but Mrs. Walsh was taken sick and gradually grew worse, so all came home. She was threatened with typhoid fever, but under Dr. Barbour's treatment seems to be recovering. (T.S.R. 54. 2 P.M. 87. S.S. 77.)

Aug. 22. Sat. Aunt Susie and Alice came in. Susie goes all about has been to Yo Simite with Frank and Maude, also to Humboldt Co. and enjoys the outings, but seems to me to be aging her eye-sight seems to remain about the same. She has a good woman to live with and help her. Have written to the children in the East. (T.S.R. 56. 2 P.M. 89. S.S. 80.)

Aug. 26. Wed. Bro. Horace with Clara Hammond came in. He looks much improved in health by his trip to Lake Tahoe. This P.M. we received, over the telephone from Ada, very sad and entirely unexpected news of the sudden death at Pittsburg, of our Rev. W.H, Cooke, this early morning. And she was not there with him, as she had left him there last Mond. morn and had gone home to Oakland. We look for further particulars later - only there are to be funeral services at Pittsburg tomorrow and then they are to go home with the body. (T.S.R. 51. 2 P.M. 83. S.S. 69.)

Aug. 27. Thurs. Received from Ada a letter containing more particulars relating to Mr. Cooke's death. He felt so much better than for weeks before that he preached twice last Sund. whereas he had

1914. preached but once the Sund. before and not at all the Sund. before that, and seemed so well that Ada did not feel afraid to leave him alone on Mond, morning and return to her home work. Then on Mon. and Tues. he went about town calling upon sick people when he had not been able to visit for weeks before. Mr. Jewell and family, with whom Hester had visited Yo Semite, returned to Pittsburg on their way to their new home (he had formerly been High School teachers there) and Mr. Cooke persuaded them to stop with him in his rooms on the back of the church, used by the Cookes as the parsonage. Mr. Jewell reports a very pleasant Tues. evening, passed in lively conversation, and that Mr. Cooke seemed to be in his usual health and spirits. Mr. J. slept with Mr. C. and rising the next morning, dressed silently so as not to disturb Mr. C. who seemed to be sleeping. Returning about an hour after, he perceived that Mr. C. had not changed position, and upon trying to waken him, found that he had passed from earthly life. A doctor was immediately summoned, who gave it as his opinion that he had been dead from four to six hours, seemingly without moving a muscle. Because his Lord loved him. He took him thus painlessly unto Himself, as an especial favor, for be feared always that he should be a long-time invalid and a burden upon his friends after he was able to work. Like Emoch of old - "he walked with God and was not - for God took him". Just as he himself desired, he was called suddenly whom his work was completed, for they discovered he had been at work to the last. Upon the church organ, they found he had placed, for the use of the organist, a memoranda of the services for next Sabbath's services - his text and a list of hymns chosen by himself. His text was to have have been - "Jesus Christ, the same yesterday, today and forever". How he loved to preach about Jesus! And the hymns were - "Beyond the smiling and the weeping I shall be soon" - "There's a wideness in God's mercy, Like the wideness of the sea," and "Beautiful Robes", with the chorus". They shall walk with him in while." In his sermon he laid particular stress upon the fact of immortality" - Because I live, saith Jesus, ye shall live also." Rev. Goodwill, formerly pastor at Pittsburg (then called Black Diamond) who was spending a part of his vacation there (he is now pastor at Angel's) officiated at the funeral services held there today and took for his address the text and hymns chosen by Mr. Cooke, saying none could be more appropriate, then the family followed the