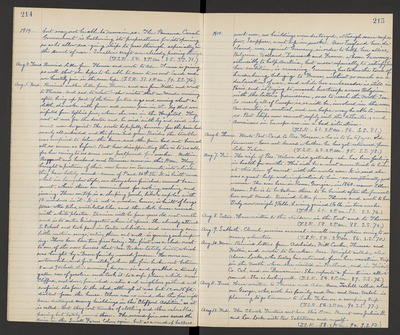 1914. but may not be able to remain so. The Panama Canal Government is hastening its preparations for its opening so as to allow sea-going ships to pass through, especially in the event of war. Smaller craft are already passing through (T.S.R. 54. 2 P.M. 85. S.S. 71.)

Aug. 5. Wed. Received another letter from Theresa and one from Willie and wrote to Theresa. And sad to relate! she writes that on Mond. morning after being up part of the time for two days and moving about a little, she woke with fever and severe pain in the leg that was infected from typhoid fever when she was in Hospital. They sent at once for the doctor and he said "milk leg" and said she must now be quiet. She wrote hopefully, however, for the pain had nearly all subsided and the fever had gone. Besides the trouble was confined to below the knee, and the pain had not been at all so severe as before. But how disappointing this is to us all, for her coming to us seems now postponed for weeks. Nellie Bergquest and husband and Bernice came in this P.M. They brought a picture of their new house in Sacramento, into which they have lately moved - corner of Pond 26th Sts. It is built some what in the bungalow style, one story above finished cement basement, where there are conveniences for cooking, washing and ironing. Then on top is a sleeping porch, like a cupola, with 12 windows in it. It is not a wooden house, is built of large terra-cotta tiles, ventilated tiles, and the whole house covered with white plaster. Bernice will be four years old next month and is to enter kindergarten when it opens. She already attend S. School and took part in Easter celebration and can sing some little motion songs, acting them out well - is growing and improving. There have been two fires today. The first was a shed next to one of the new houses that Mr. Parker lately built, which was bought by a Dane Family named Jensen. He owns an automobile, and fortunately, when the fire broke out between 8 and 9 o'clock this morning, he ran in and grabbed a twenty gallon can of gasoline and took it to a safe place, while Mrs. Clifford, next door, furnished water and neighbors gathered and confined the fire to the shed, although it was but 12 or 15 ft. distant from the house. There was no wind, else the fire might have destroyed many buildings in the "Clifford Addition", as it is called. But they lost trunks of clothing and other valuables, having but lately moved there. The second fire was across the river in the Small Farms Colony again, but as a crowd of helpers

1914. went over, no buildings were destroyed, although some crops, few, I suppose, went up in smoke. Now England has declared war against Germany, in order to help her allies, Belgium, Holland, Denmark and France, whom Germany, ostensibly to help Austria, but more especially to satisfy her her ambition, is menacing. Germany has taken the town of Luxenbourg, belonging to France, without so much as a declaration of war, and while her ambassador is still in Paris, and is trying to march her troops across Belgium with the latter's permission, was to reach the North Sea. So nearly all of Europe is, or will be, involved in the war. Our country is neutral, and we hope may be able to remain so. But ships now cannot safely sail the Atlantic and Americans in Europe are in a bad situation. (T.S.R. 61. 2 P.M. 96. S.S. 81.)

Aug. 7. Fri. The wife of Pres. Wilson died yesterday - she has been failing in health for months. This will be a most severe trial to him at this time of unrest with the world war. It is said she was a great help and inspiration to him - an exceptionally good woman. She was born in Rome, Georgia, in 1860 - name Ellen Axson. She is to be taken there to be buried after the funeral here next Mond. Received letter from Theresa and wrote to her. Baby now weighs 9 1/4 lbs. having gained 1 1/4 lbs. in two weeks. (T.S.R. 60. 2 P.M. 93. S.S. 76.)

Aug. 10. Mon. Received letters from Adelaide, Will Cooke, Theresa and Willie, and wrote to Eureka. Mrs. Wright called, also Alma Locke, who today has returned from her vacation trip in the North, when she visited in Portland, and in Trinity Co. Cal. and in Dunsonnis. She repots a fine time all around. she is looking well. (T.S.R. 54. 2 P.M. 87. S.S. 76.)