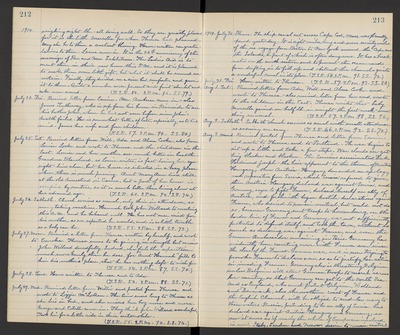 1914. weighing eight lbs. - all doing well. So they are greatly pleased for it is the little Marcella for whom Theresa had planned. May she be to them a constant blessing. Have written congratulations to them. Laura came in. It is the 24th anniversary of the marriage of Rev. and Mrs. Sahlstrom. The Ladies Aid is to meet there in their new home this P.M. and it is planned to make them some little gift, but what it shall be seemed uncertain. Finally they decided on a nice bed comforter and gave it to them. Quite a number were present and fruit sherbet and cake were served. (T.S.R. 50. 2 P.M. 92. S.S. 79.)

July 24. Fri. Received letter from Eunice. Mr. Ambrose came in - also James Tretheway, who is up from his home in Riverside to see his brother John, whom he has not seen before since John's health failed. He is somewhat better of late, especially as to his mind. James has wife and four children. (T.S.R. 57. 2 P.M. 94. S.S. 80.)

July 25. Sat. Received letters from Will, Ada and Alma Cooke, also from Louise Locke and wrote to Theresa and the children in the East. Louise and her mother are much better in health. Grandma Blanchard, so Louise writes, is fast losing her eyesight - lives alone, but her house is situated in a busy place where there is much passing. Aunt Mary Ann lives still at the old homestead in Carver, but a part of her house is occupied by renters, so it is much better than living alone at her advance age. (T.S.R. 60. 2 P.M. 92. S.S. 74.)

July 26. Sabbath. Church services as usual, only thin in attendance, so many taking vacations. Hannah took John Willard to meeting this A.M. and he behaved well. He has not once cried for his mother, as we expected he would, and is as little trouble as a baby can be. (T.S.R. 55. 2 P.M. 88. S.S. 73.)

July 27. Mon. Received a letter from Theresa written by herself, and wrote to Eureka. Theresa seems to be gaining in strength but misses John Willard dreadfully. Indeed, she feels the separation much more keenly than he does, for "Aunt Hannah" fills to him his mother's place that he has nothing left to wish for (T.S.R. 54. 2 P.M. 87. S.S. 70.)

July 29. Wed. Received letter from Willie and postal from Theresa and wrote to Lizzie McLellan. The time seems long to Theresa and she lies in bed, and she misses her boy more and more. George and Estella came in. They think John Willard wonderful. Took him for a little ride in their automobile. (T.S.R. 55. 2 P.M. 92. S.S. 74.)

1914. July 30. Thurs. The ship canal cut across Cape Cod, Mass. was formally opened yesterday. It is eight miles long and saves seventy miles of the sea voyage from Boston to New York around the Cape and the Islands, a part of which is often dangerous. It has a breakwater or the north eastern and to prevent the ocean sands from drifting in to fill up and obstruct the channel - quite a wonderful canal in its place. (T.S.R. 54. 2 P.M. 91. S.S. 72.)

Aug. 1. Sat. Received letters from Ada, Will and Alma Cooke and wrote to Theresa - also received letter from her and wrote to the children in the East. Theresa writes that baby Marcella gained one-half lb. in weight the first weeks - something unusual. (T.S.R. 57. 2 P.M. 98. S.S. 86.)

Aug. 3. Mond. Received postal from Theresa and letter from Eunice and wrote to Theresa and to Portland. Theresa begins to sit up a little and take a steps. War clouds are getting blacker and blacker. The Servians assassinated Duke Ferdinand Joseph - the heir - apparent to the throne of Austria Hungary, then Austria - Hungary demanded an apology and separation from Servia, which Servia refused to give, then Austria - Hungary declared against Servia, and Germany, eager to fight France, declared herself an ally of Austria, and forth with began hostile declarations against France, who desired to remain neutral, but could not do so, because Germany sent troops to Luxemburg, on the border line of France and Germany, was not sufficiently protected to defend itself, and took the town, without so much as declaring war against France, and even the German Ambassador remaining in Paris. Germany has evidently been courting war with France ever since the close of the France - German war, and is now trying to provoke France to declare war, so as to justify her action in invading France. Germany also threatening Belgium unless Belgium will allow German troops to march across her country, so that Germany can get to the North Sea. And so England, who must protect Belgium, Holland and Denmark, also the northern coast of France and the English Channel, will be obliged to send her navy to those waters. Russia, pretending to be an ally of Servia, has declared war against Austria - Hungary and Germany, so now it seems as if nearly the whole of Europe are involved in war. Italy, Sweden and Norway desire to remain neutral