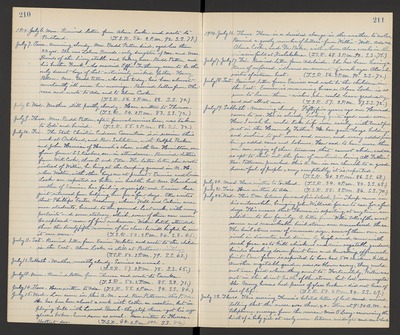 July 7. Tues. Morning cloudy. Mrs. Budd Patton died, aged less than 22yrs. she was Lelma Bunds - only daughter of Mr. and Mrs. bunds of the livery stable and bakery here. Budd Patton and his brother Frank, who married Effie Tretheway, seems to be the only decent boys of that notoriously wicked father - Harry Patton. Mrs. Budd Patton, who died today, has been almost constantly ill since her marriage. Received letter from Theresa and wrote to Ada and to Alma Cooke. (T.S.R. 56. 2 P.M. 88. S.S. 70.)

July 10. Fri. The State Christian Endeavor Convention is in session this week at Oakland, and Rev. Sahlstrom, with Ralph Parker and John Harrison of Hannah's Class, with Mr. Hamilton, one of our former S.S. teacher, are in attendance. Received letters from Will Cooke, Alma E. and Etta. The latter letter she wrote instead of Willie, he being at the camping ground in N.H. where Walter, with other boys are at present. Eunice and Louisa Locke are reported as better in health, but Mrs. Blanchard, mother of Eunice, has failing eyesight , and Eunice has first returned from helping her for a few days. Etta writes that Phillips Exeter Academy, where Will and Calvin were once students, burned to the ground last week, with many portraits and some statuary, which, some of them can never be replaced cause of fire unknown. Willie lately attended there the twenty fifth reunion of his class - he will be glad he saw it once more. (T.S.R. 52. 2 P.M. 84. S.S. 65.)

July 19. Sabbath. Morning cloudy. Fifty five years ago our Howard came to us. He is already looking quite aged and worn. How I wish he could take life more easily, with trustful rest in the heavenly Father! He has quite large holdings and inclines to get more and more, and every added piece brings added cares and labours. How sad to have more than one can enjoy of there treasures that cannot abide, and are so apt to shut out the face of our tender, loving all Father! Rev. Patterson preached this A.M. in our church to a good house-ful of people, very acceptably, it is reported! (T.S.R. 60. 2 P.M. 86. S.S. 68.)

July 22. Wed. This P.M. between four and five o'clock, Jim Thorp came in his automobile, bringing John Willard for us to care for a few days. This means that Theresa is expecting, at anytime, an addition to her family. A letter from Willie tells of the most severe and remarkable hail storm ever remembered there. The hail stones were of immense size, some of them over an inch in diameter, and driven by high wind, came with such force as to kill chickens and ruin vegetable gardens, besides breaking down fruit trees and knocking off much fruit. One farm is reported to have had 500 chickens killed. Another vegetable garden was so blown away, they could not even find where they went to. Fortunately, Willie was not in the direct path of the storm, but lost some vegetables. Many houses had panes of glass broken - did not hear of loss of life. (T.S.R. 53. 2 P.M. 84. S.S. 69.)

July 23. Thurs. This morning Theresa' s belated letter of last Mond. arrived telling that the nurse was there. D.C. then at 9:30 A.M. telephone message from the nurse- Miss O'Leary - announcing the birth of a "baby girl" at early morn - between midnight and one o'clock