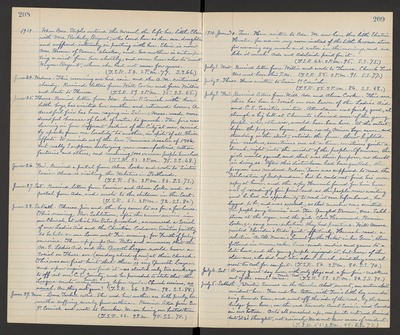 1914. When Mrs. Staples entered the Normal, she left her little Elsie with Mrs. Berkeley Bryant, who loved her as her own daughter and suffered intensely in parting with her. Elsie is now Mrs. Brown of Nome, Alaska, and her mother is anticipating a visit from her shortly, and came here also to meet Wayne Bryant, whom she had not seen for years. (T.S.R. 54. 2 P.M. 77. S.S. 66.)

June 25. Thurs. Received letter from Ida. Susie P. Cornish with her little boys, has visited her mother and returned home. A dreadful fire has been raging in Salem, Mass. made more dreadful because of lack of water to quench. The fire was burning in four different sections of the City at once, carried by sparks from one locality to another, in spite of all their efforts. It reminds us of the San Francisco disaster of 1906, but really I suppose, destroying more manufactories, cotton factories and others, and rendering 1000 or more people homeless. (T.S.R. 53. 2 P.M. 75. S.S. 68.)

June 28. Sabbath. Theresa, Jim and the boy came to us for a few hours. This evening Rev. Sahlstrom, after the union services in our Church, at which Rev. Bates preached, announced a Social of our Ladies Aid and the Christian Endeavor Societies jointly to be held on our Lawn next Fri. evening, for Fourth of July exercises. Then up jumps Mr. Bates and announces that the M.E. Ladies Aid and the Epworth League would have a Social on Thurs. eve. (one day ahead of ours) at their Church. This was our first hint that there is any Epworth League and upon inquiry we find it was started only two weeks ago to off-set our C.E. Society, and be proceeded to state that the League meets every Sund. evening before regular Church services, as usual. Are they not queer? (T.S.R. 66. 2 P.M. 98. S.S. 88.)

June 29. Mon. Leona Tarbell called. She and her mother are both poorly, her mother suffering severely from asthma. Received letter from San P. Cornish and wrote to Eureka. We are having our heated term. (T.S.R. 62. 2 P.M. 98. S.S. 78.)

July 3. Fri. Received letters from Will, Ada and Alma Cooke. This eve there has been a Social on our lawn of the Ladies Aid and C.E. Societies united. Attendance was fairly good, although a big ball at Clements claimed some of the young people who, otherwise, would have been here. At the outset before the program begun, those rowdy Miner boys came and standing in the street, outside the fence, threw lighted fire-crackers, sometimes one at a time, sometimes quite a bunch, right into the midst of people - of course, the girls would squeal, and that was their purpose, no doubt in doing so. After this disturbance had been quelled, the program was rendered. Nelson Davis was supposed to read the "Declaration of Independence", but he could not find his own copy at home, and the copy Hannah found for him here was of exceedingly fine print, and as the people were waiting and he had no opportunity to read it over beforehand, he begged to be, and was excused, so that number was omitted. The people sang "America" and "Star-Spangled Banner", Mrs. Sahlstrom at the organ, and the girls - Clara Hammond, Bernice Locke, D.C. sang some selection they had practiced - Will Moore recited "Sheridan's Ride" quite effectively, Hannah, read a selection - "An Old Woman's Lamont for the Pocket in her Gown", then followed ice cream, cake, home-made candies and games to a late hour, and the young people enjoyed it, but some of the older ones, who did not stir about much, said they were almost too cool for comfort. (T.S.R. 50. 2 P.M. 80. S.S. 70.)

July 5. Sabbath. Patriotic Sermons in the churches. About sunset, an automobile accident here. Tom and Geo. Patton, with Tom's little boy were driving towards town, and went off the side of the road, by the second bridge from here, on the end towards Aunt Susie's, and landed in our bottom. Auto all smashed up, occupants cut and bruised but it is thought, not seriously. We do not know cause of accident. (T.S.R. 55. 2 P.M. 88. S.S. 73.)