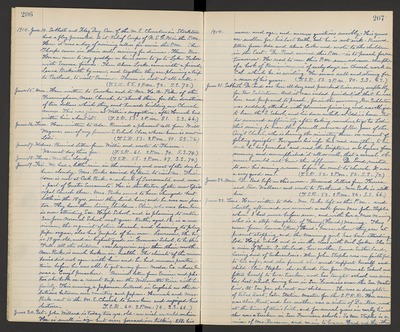 1914. June 14. Sabbath and Flag Day. One of the M.E. churches in Stockton had a flag presented to it Relief Corps of N.S.G.W. in the P.M. Here it was a day of receiving callers for me in the P.M. The Thorps came in their auto, arriving for dinner. Then Bro. Horace came to say goodbye as he is soon to go Lake Tahoe with Sonoma friends. Then Alma Locke came with a friend, Laura Beckwith by name, and together they are planning a trip to Portland, to visit Eunice. Theresa is not at all well. (T.S.R. 55. 2 P.M. 92. S.S. 72.)

June 15. Mon. Have written to Eureka and to Mr. H.A. Pike of the Framingham, Mass, Church, to thank them for the donation of ten dollars which they sent towards building our Church annex. This was given at Willie's suggestion, after Hannah had written him about it. (T.S.R. 53. 2 P.M. 81. S.S. 66.)

June 19. Fri. We had a little rain in the morning and most of the day has been cloudy. Mrs. Perks arrived by train to visit us. Their home is now at Oak Park, a suburb of Sacramento, and now a part of Greater Sacramento. He is the Rector of the new Episcopal Church there. Mrs. Perks seems to have changed but little in the 18 yrs. since they lived here, and he was our pastor. They have three living children. Olive, who was born here is now attending Sac. High School, and is planning to enter San Jose Normal School next year. Ruth, aged 16, is a musician, the organist of their church, and learning to play pipe organ, also has pupils of her own. Lawrence, the boy is 13 yrs. old and in highest grade in Grammar School, to be this Fall. All the children are larger in size than their mother. Mr. Perks is much broken in health. The climate of the mountains did not agree with him and he had nervous prostration before he was able to get away from Madoe Co. Where he was a Cong'l preacher. Received letter from Eunice and photos she took on a recent trip on the Willamette River with her family. This evening a Japanese lectured in English on the relations between our country and Japan. Hannah and Mrs. Perks went to the M.E. Church to hear him and enjoyed his lecture. T.S.R. 60. 2 P.M. 74. S.S. 66.)

June 20. Sat. John Willard is today two yrs. old - we wish we could see him. He is small in size but very forward in talking - tells his

1914. name and age, and answers questions sensibly. His gums are swollen for his last teeth, but he is not sick. Received letters from Ada and Alma Cooke and wrote to the children in the East. De-Pond arrived this P.M. - is to preach for us tomorrow. He read to me this P.M. some advance chapter of a book of "Reminiscences" of early days in Church work in Cal. which he is writing. He seems well and strong for a man of his years. (T.S.R. 51. 2 P.M. 80. S.S. 63.)

June 21. Sabbath. Dr. Pond was here all day and preached twice very acceptably for Rev. Sahlstrom. And it was indeed providential that he was here and prepared to preach, for in the morning, Rev. Salhstrom was suddenly attacked with ptomaine poisoning and was obliged to leave the S. School, and lie down awhile at Eddie's house. But he recovered sufficiently after taking remedies, to go to Lodi this evening to hear the farewell sermon of Rev. Jones of the Cong'l Church, who is leaving the ministry there on account of failing eyesight. For years his wife has read everything to him and he has preached and read the Scriptures and Hymns from memory, and accomplished it all so well, that a casual observer would not know the difference. De-Pond recited to me his evening sermon before he went to church. It was a very good one. (T.S.R. 52. 2 P.M. 86. S.S. 66.)

June 23. Tues. Have written to Ada. Mrs. Perks left us this P.M. and shortly afterwards we received a call from Mrs. John Staples whom I had never before seen, and with her a Miss Manning who is a step-daughter of Fanny (Hurd) Manning. They came from Emma (Kerr) Hurd's house, where they are at present stopping, and the Manning girl has been attending Lodi High School and is in the class with Niel Locke. She is a niece of Hester Sutherland, her mother, Emma Sutherland, having died of tuberculosis. When John Staples was unfaithful to his wife, and she found she must support herself and child - Elsie Staples - she entered San Jose Normal School and fitted herself to be a teacher, and has taught school ever since her last school, having been in San Francisco near the San Mateo line. At San Jose she met our children. She was a daughter of Silas Burt, later Station Master for the S.P.R.R. Her name was Alice Burt, and her mother was a sister of Dr. Kerr, and at the time of Alice's birth, and for several years in early times she was a teacher in San Francisco schools. So Mrs. Staples is a niece of Mrs. Russem, and cousin to Emma Hurd and the others.