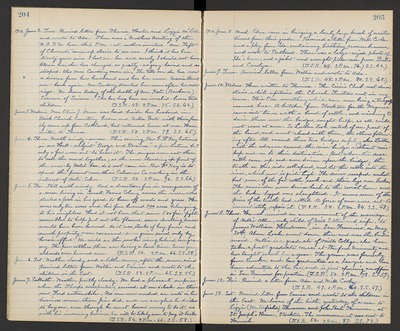 1914. June 2. Tues. Received letters from Theresa, Hester and Lizzie McLellan and wrote to Ada. There was a "Mothers Meeting" of the W.C.T.W. here this P.M. - all mothers invited. Mrs. Taft of Clements came up stairs to see me. I think it has been twenty years since I last saw her and surely I should not have known her, she has changed so greatly - so gray-haired and so stooped. Also Mrs. Cowdery came in. She tells me she has now a divorce from her husband and has her name Marie Knudsen - back again. Mr. Cowdery deserted her soon after her marriage. We learn today of the death of Mrs. Kate (Barbour) Severson of Suisun. She has long been an invalid - leaves two children. (T.S.R. 48. 2 P.M. 75. S.S. 62.)

June 3. Wednes. Mrs. Olive J. Green was laid beside her husband in Brick Church Cemetery. Gordon and Della Foote with their family came up from Oakland, but returned home at once. Have written to Theresa. (T.S.R. 50. 2 P.M. 79. S.S. 65.)

June 4. Thurs. North windy - severe. This evening Rev. G. De Kay lectured in our Hall - subject "Booze and Business".- a fine lecture but only a few were out to hear it. The singers were not there to call the crowd together, so the men standing in front of the near-by Hotel-bar, did not come in. Rev. DeKay is to spend the present month in Calaveras Co-working in the interest of Anti-Saloon. (T.S.R. 50. 2 P.M. 72. S.S. 66.)

June 5. Fri. Still north windy. And disastrous fire in consequence of a man living in "Small Farms Colony" across the river, who started a fire in his yard to burn off weeds and grass. He owns only ten acres and his fire burned 300 acres belonging to his neighbors. Had it not been that some 500 fire-fighters assembled to help put out the flames, some dwelling houses would have been burned. As it was, stacks of hay, fences and much property were consumed - some grain saved only by heroic effort. We could see the smoke rising behind our granary. The poor settlers there are having a hard time. Some young orchards were burned over. (T.S.R. 50. 2 P.M. 66. S.S. 58.)

June 7. Sabbath. Weather partly cloudy. We had a pleasant surprise when the Thorps unexpectedly arrived at one o'clock in their new Ford automobile. No one ever needed an auto in his business more than Jim did, and we are glad he decided to buy one, even though he must borrow money to do it, as with his increasing business, he will be likely soon to pay it back. (T.S.R. 54. 2 P.M. 66. S.S. 58.)

1914. June 8. Mond. Edna came in bringing a lovely large bunch of nasturtiums from their garden. Received a letter from Will Cooke and a pkg. from Ida, containing birthday remembrances, and wrote to Portland. There was a large-sized photo of Ida's house, and a jabot and wrought pillowcase from Delia and Carolyn. (T.S.R. 48. 2 P.M. 76. S.S. 62.)

June 10. Wednes. Have written to Theresa. The Civic's Club met downstairs, while upstairs the Church Trustees met in my room. This P.M. something which came near being a tragedy occurred here. A butcher from Stockton for the Wagners came into town with a band of cattle, and wishing to drive them over the bridges, sought help, as all could not across at once. So Luther took control of one part of the band, and went ahead with them, the others following after. All crossed these two bridges safely, also Luther write the advance crossed the river bridge without mistake and on to their destination. But when the rear cattle came up and were driven upon the bridge, the trestle on this side collapsed, and let the cattle into the river, which now is quite high. The driver escaped unhurt but some of the fat cattle sank and their legs were broken. The remainder were drive back to the corral here and the broken-legged ones slaughtered. It seems some of the piers of the trestle had rotted. A force of men were set to immediately repair it. (T.S.R. 50. 2 P.M. 84. S.S. 68.)

June 11. Thurs. Hannah received an announcement of the marriage of Nellie Allen, only child of Will S. Allen and wife, to James William Henderson, in San Francisco, on May 30th. Alma Locke went down there and was the bride's maid. Nellie is a graduate of Mills College, also has taken a post-graduate course at Stanford University and has taught school for a year. The groom was formerly from Eureka, and has graduated as a lawyer and has been admitted to the bar, and is just opening an office in San Francisco for practice. (T.S.R. 50. 2 P.M. 78. S.S. 59.)

June 13. Sat. Received letter from Eunice and wrote to the children in the East. We learn of the birth, yesterday, of a son to Lizzie (Westerfield) Thurman and John Paul Thurman, at St. Joseph's Home, Stockton. The announcement was sent to Hannah. (T.S.R. 52. 2 P.M. 87. S.S. 72.)