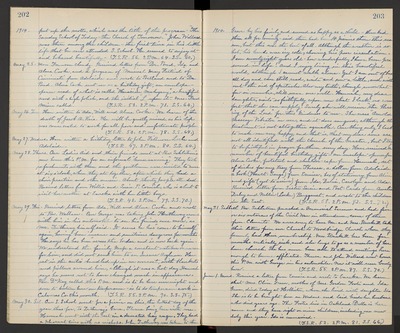 May 25. Mon. Forenoon cloudy. Received letters from Dr. Pond, Ida and Alma Cooke, and a program of "Musical May Festival" of Cincinnati from Adelaide and wrote to Portland and to Dr. Pond. Alma Cooke sent me as a birthday gift, an envelope - opener made of what is called "Hawaiian Mahogany", a beautiful wood with a high polish, and the initial "L" upon it. Mrs. Fred Miner called. (T.S.R. 52. 2 P.M. 71. S.S. 64.)

May 28. Thurs. Our Ladies Aid and their friends met at Rev. Sahlstrom's new home this P.M. for an informal "house warming". They took refreshments with them and the gentlemen were invited to come at six o'clock, when they ate together, after which they had a chair practice and other music. About thirty people attended. Received letters from Willie and Susie P. Cornish, who is about to visit her mother at Eureka with her little boys. (T.S.R. 48. 2 P.M. 78. S.S. 70.)

May 29. Fri. Received from Ada, Will and Alma Cooke and wrote to Rev. Wallace. Our George was taking John Tretheway around with him in his automobile "to see his friends once more", as Mr. Tretheway himself said. It seems he has "come to himself" again, having been insane and sometimes dangerous for months. He says he has been "across the border and is now back again. We understand the family keep a constant watcher or nurse for him, and did not send him to an Insane Asylum. He sat in the auto bundled up in an overcoat, with blankets and pillows around him, although it was a hot day. Hannah says he seems not to have changed much in appearance. Rev. DeKay called this P.M. and is to be here over night and soon to lecture here on temperance - is to do temperance work in Calaveras Co. this month. (T.S.R. 55. 2 P.M. 90. S.S. 75.)

May 30. Sat. Our S. School went for a picnic on this, the hottest day of the year thus far, to Tretheway's Grove. Theresa being here with me, Hannah went with the rest in a decorated hay wagon. They had a pleasant time with no mishaps. John Tretheway was taken to the

1914. Grove by his family and seemed as happy as a child - thanked them all for coming - said there had been 14 picnics there this season, but this was the best of all. Although the weather is so hot, his hands were icy cold, showing his poor circulation. I am seventy eight years old - how wonderful I have been preserved in life! And I enjoy living in this beautiful world, although I cannot walk alone. Yet I am out of bed all day and can still read, write and sew a little, and with out the aid of spectacles. Also my teeth, though somewhat few in number, still serve me well. Hannah, my dear daughter, waits so faithfully upon me that I lack no comfort that she can supply. Surely she will receive "the blessing of the Lord" for this kindness to me. She uses "Arnold Massage Vibrator" on me, and it does me good, although the treatment is not altogether agreeable. One thing only I lack to make me very happy, and that is, that my dear sons are not all identified with the church of the master, but I try to be faithful in prayer for them every day. Have received a number of beautiful birthday gifts - an envelope-opener from Alma Cooke, footstool and shoulder - cape from Hannah, set of dishes for any tray from Theresa, a dollar from Adelaide, a book (Heart-Songs) from Eunice, box of stationery from Alice and gifts (yet to arrive) from Ida, Delia, Carolyn and Ada. Received letter from Sister Susie and Post-Cards from Amelia Daley and Nellie (Locke) Bergquest, and wrote to the children in the East. (T.S.R. 58. 2 P.M. 93. S.S. 72.)

May 31. Sabbath Rev. Sahlstrom preached a Memorial Sermon and had five or six veterans of the Civil War in attendance, come of them from Clements. We were sorry to have Mr. And Mrs. Burkett take their letters from our Church to Woodbridge Church where they formerly had their membership. Mrs. Burkett has been for months critically sick, a and she longs to go as a member of her home church. She has never been able to attend meetings here enough to become affiliated. Theresa and John Willard went home this P.M. with George in his automobile. Now it will seem lonely here. (T.S.R. 55. 2 P.M. 87. S.S. 70.)

June 1. Mond. Received a letter from Eunice and wrote to Eureka. We learn that Mrs. Olive Green, mother of Mrs. Gordon Foote and Ida Green, died today at Hollister, where she lived with daughter Ida She is to be brought here on Wednes. and laid beside her husband who died year ago. The Footes live in Oakland - Della is her name and they have eight or nine children, including one new baby this year. Ida is unmarried. (T.S.R. 52. 2 P.M. 81. S.S. 66.)