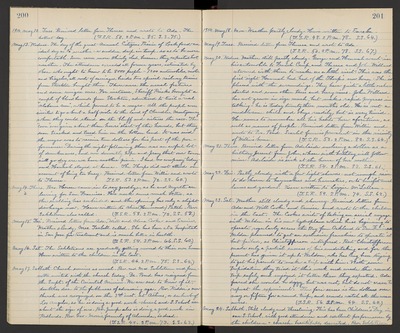 May 13. Wednes. The day of the great Annual Citizens Picnic of Lockeford - an ideal day as to weather - a sudden drop in temp. so as to be more comfortable. Some came more thinly clad, because they expected hot weather. The attendance exceeded all former years, estimated by those who ought to know to be 8000 people - 1200 automobiles, motor and bicycles, and sorts of carriages, besides two special railway trains from Stockton. brought them. There were the usual features and some unique ones. For instance, Sheriff Ricks brought a couple of blood hounds from Stockton, advertised to trail a "real "alabama coon", which proved to be negro. All the people were invited to go about a half-mile to the land of Chandler Montgomery where they could stand on the bluff and witness the race. The "coon" was given about three hours' start of the hounds, but they soon tracked and treed him on the bottom land. It was said the negro was to receive ten dollars for his part of the performance. During the night following there was an awful lot of drunkenness, and we devoutly hope and pray that our town will go dry ere we have another picnic. I had no company today. and Hannah stayed at home. The Thorps did not attend on account of being too busy. Received letter from Willie and wrote to Theresa. (T.S.R. 53. 2 P.M. 72. S.S. 60.)

May 14. Thurs. Bro. Horace came in to say goodbye, as he and Myrtle are leaving for San Francisco. His neck seems much better, as the swelling has subsided and the opening has only slight discharged now. Have written to Alice (Hammond) Petch. Rev. Sahlstrom also called. (T.S.R. 53. 2 P.M. 72. S.S. 58.)

May 17. Sabbath. Church services as usual. Rev. and Mrs. Sahlstrom and Jeannette united with the church today. Dr. Pond has resigned from the Supt. of the Oriental Mission. We are sad to know of it, doubtless due to the feebleness of advancing age. Rev. Kidder's new church was recognized on the 3rd inst. at Athens, a suburb of Los Angeles, so he is doing a good work - church and S. School are about the size of ours. Rev. Jump also is doing a good work in Redlands. Rev. Geo. Morris, formerly of Alameda, is dead. (T.S.R. 48. 2 P.M. 73. S.S. 63.)

May 20. Wednes. Weather still partly cloudy. George and Hannah went in his automobile to French Camp, and Theresa and John Will and returned with them to make us a little visit. This was the first sight Hannah had had of the Thorp's new house. She is pleased with the surroundings. They have quite a little orchard started and some other trees and berry vines. John Willard has not grown in size much, but makes rapid progress in talking - he is today twenty three months old. He is not a meddlesome child and obeys readily but is very timid. He seems to remember all his habits here aforetime, as well as names of people. Received letter from Willie and wrote to Dr. Pond. Scarlet fever is prevalent in the vicinity of Willie's home. (T.S.R. 52. 2 P.M. 82. S.S. 64.)

May 21. Thurs. Received letter from Adelaide enclosing a dollar as a birthday present from John, whose sixth birthday will follow mine. Adelaide is sick at the home of her mother. (T.S.R. 54. 2 P.M. 83. S.S. 61.)

May 23. Sat. Weather still cloudy and showery. Received letters from Ada and Will Cooke and Eunice and wrote to the children in the East. The Cookes write of taking an aerial voyage with Weldon in his new hydroplane which he is beginning to operate regularly across the Bay from Oakland to San Francisco Weldon planned to get an exclusive franchise to operate it but failed, as Christofferson interfered. But Christofferson made only a partial success of his undertaking and for the present has given it put to Weldon, who has long been trying to get his parents to make a trip with him. With some trepidation they tried it this week and made the round trip safely and enjoyed it better than they expected. Ada feared she would be dizzy but was not, but do not crave to repeat the experiment. The fare across is ten dollars one way or fifteen for a round trip, and crowds watch all the maneuvers. (T.S.R. 56. 2 P.M. 64. S.S. 60.)

May 24. Sabbath. Still cloudy and threatening. This has been Children's Day in our S. School, with good attendance and excellent performance by the children - church beautifully decorated. Rev. Sahlstrom