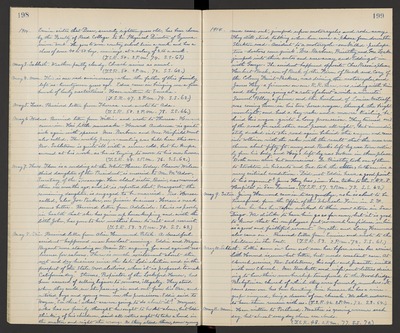 May 6. Wednes. Received letter from Willie and wrote to Theresa. Howard came in. His little namesake - Howard Anderson is quite sick again with spasms Mrs. Barbour and Mrs. Windfield Mont. also called. The weekly prayer-meeting was held here this eve. Rev. Sahlstrom is quite ill with a severe cold, but he keeps around at his work, as he is trying to move to his own home. (T.S.R. 48. 2 P.M. 76. S.S. 62.)

May 7. Thurs. There is a wedding at the White House today. Eleanor Wilson third daughter of the President, is married to Mr. McAdoo, Secretary of the Treasury, Her eldest sister, Bessie, was married there six months ago, and it is reported that, Margaret, the remaining daughter, is engaged to be married. Bro. Horace called, also Joe Parker, on picnic business - Horace's neck seems better. Received letter from Adelaide. She is so poorly in health that she has given up housekeeping and with the little John, has gone to her Mother's home to rest and recruit. (T.S.R. 53. 2 P.M. 74. S.S. 63.)

May 8. Fri. Received letter from Alice Hammond Petch. A dreadful accident happened near here last evening. Eddie and Wayne Bryant were standing on Main St. arguing for and against no license for saloons. There is much excitement about the wet and dry business since the late Lodi election and in the prospect of the State Nov. Elections, when it is proposed "to make California dry" Stevens, Proprietor of the Lockeford House, has been accused of selling liquor to minors, illegally. They stood where they could see the passing in and out from his Bar, and noticed boys and young men in the procession. Eddie said to Wayne, "See there! what are we going to do about it?" Wayne, who has no family thought he ought to be let alone, but Eddie thinking of his children, said all voters ought to take a hand in the matter and right the wrong. As they stood there, some young

1914. men came out, jumped upon motorcycles and rode away. They still stood talking when here came a phone from down the Stockton road -"Accident to a motorcycle - one killed - perhaps two - doctors come quick. "Drs. Barbour, Priestly and Geo. Locke jumped into their autos and were away, and Eddie got in with George. The accident happened opposite Chas Bacon's place Herbert Buck, son of Buck of the Firm of buck and Cory of the Colony Fruit-Packers, was driving the motorcycle, and James Hay - a fireman on our R.R. here, was riding with him and they were going at a rate of about "a mile a minute". Samuel Pollay, a farmer and the husband of Louisa Metcalf, was coming home in his two horse wagon, through the bright moonlight, and had a hay-rake and a mower trailing behind his wagon - quite a long procession. They turned out of the road for each other and passed all night, but immediately ducked into the road again behind the wagon and came into collision with the rake with the result that the men were thrown about fifty ft. away and Buck's left leg was torn entirely from his body and Hay's left leg was broken in three places. Both were alive but unconscious. Dr. Priestley took one of them to Stockton in his auto and Geo. took the other, both are in a very critical condition. Did not Eddie have a good point to his argument? James Hay has since been taken to S.R.R.R. Hospital in San Francisco. (T.S.R. 57. 2 P.M. 73. S.S. 62.)

May 9. Satur. Jimmy Hammond came in to say goodbye, as he is about to be transferred from the Office of the Wholesale Firm in S.F. where he has here to [?] worked to their now store in San Diego. We dislike to have him go so far away, but it is good to know that his employers put so much confidence in him as "a good and faithful servant." Myrtle and Lucy Hammond also came in. Received letter from Eunice and wrote to the children in the East. (T.S.R. 53. 2 P.M. 72. S.S. 61.)

May 10. Sabbath. Lottie came in - have not seen her before since her arrival. Little Howard is somewhat better, but needs constant care. At church services, Rev. Sahlstrom, his wife and Jeanette united with our church. Mr. Burkett and wife sent letters desiring to have their membership transferred to the Woodbridge Presbyterian church of which they were formerly members. It seems some one has been taunting him because he has a wine-grape vineyard, being a deacon of our church. We shall endeavor so have them remain with us. (T.S.R. 46. 2 P.M. 72. S.S. 64.)