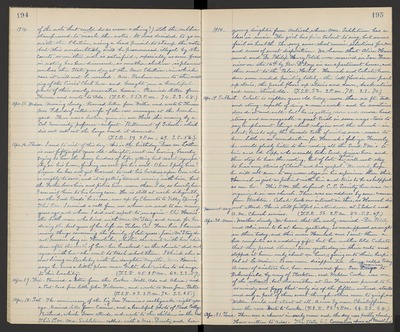 1914 of the wets that could do so mean a thing?) stole the rubber stamp used to mark the votes. It was decided to go on with the Election, using a lead pencil to stamp the votes but this undoubtedly will be pronounced illegal by the Courts, so neither side is satisfied, especially as some frame in voting has been discovered, so another election is planned unless the State goes dry at the Nov. Election, in which case it will not be needed. Mrs. Barbour came to the meeting of the Civic's Club here and brought me a beautiful photo of their newly renovated home. Received letter from Theresa and wrote to Ada. (T.S.R. 55. 2 P.M. 74. S.S. 68.)

Apr. 15. Wednes. Morning cloudy. Received letter from Willie and wrote to Theresa Mrs. Folendorf called - wife of the new manager at the lumber yard. These was a lecture given in our Hall this evening by a Cal. University professor subject. "Betterment of Schools" - which did not call out the large crowd it deserved. (T.S.R. 59. 2 P.M. 69. S.S. 56.)

Apr. 16. Thurs. I used to write of this day - this is the birthday. Dear son Luther is now fiftyeight years old - straight, erect and bearing, bravely trying to bear the heavy burdens of life, getting but scant sympathy in his home, finding no rest for his soul. O how I pity him! because he has not yet learned to rest his burdens upon One who is "mighty to save," and it is getting "toward evening" with him, but the Father loves him and pities him more than I do, so hour by hour I commit him to his loving care. He is still at work diligently on the "Good Roads" business, now up by Clements to Valley Spring. This P.M. I received a call from one whom we used to see many years ago and whom I did not expect to see again - Eli Harris the little man who lived with Mrs. McStay and cared for her during the last years of her life in Tulare Co. From him I learned many things concerning the family of late years. Josie McStay did not remain long in Honolulu, whither she went with her children after the death of Geo. - her husband as the climate did not agree with her - she went to teach school there. I thinks she is now living in Berkeley with her daughter Myrtle. Mr. Harris says he owns a little place near Galt, but wishes to change to this locality. (T.S.R. 45. 2 P.M. 62. S.S. 57.)

Apr. 18. Sat. The anniversary of the big San Francisco earthquake - eight yrs. ago. Received letter from Eunice, and a beautiful photo of Reed College, Portland, which Dean attends, and wrote to the children in the East. This P.M. Mrs. Sahlstrom called with a Mrs. Dorothy and her

1914. young daughter from Antioch, where Mrs. Sahlstrom has a class in music. The girl has fine talent to sing, but seems frail in health. She sang some sheet music selections for me and seems of sweet disposition. We learn that Alice Hammond and Dr. Philip Henry Petch were married in San Francisco on the 16th by Rev. DeKay, in an apartment house, and then went to the Palace Hotel. Hannah and Celeste have done some needed painting lately - the hall floor in new part upstairs, the porch floors up-stairs and down, back stairs and some thresholds. (T.S.R. 52. 2 P.M. 78. S.S. 70.)

Apr. 19. Sabbath. Celeste is eighteen years old today - more than six ft. tall and strong - capable of doing a man's work - and he sometimes does do it and well - but he is getting more and more headstrong and unmanageable - a great-trial in some ways - tries to say unpleasant things about religion and the church - in short, tries to copy the bravado talk of wicked men - seems to have little or no consideration for Hannah's feelings. Formerly he would gladly listen to her reading all the Sund. P.M.'s to him and Ed. Lipp, who usually takes Sund. dinner here and then stays to hear the reading, but of late he Celeste will not stay to hear any stories of Christ and his gospel. We surely hope he will not come to any worse stage in his experience than this. Hannah is just as patient with him and tries to be as helpful as can be. This P.M. the defunct C.E. Society here was reorganized in our church. There was an address by some woman from Stockton. Celeste took no interest in this. So Hannah did not attend. He is still faithful in attendance at S. School and A.M. Church services. (T.S.R. 56. 2 P.M. 82. S.S. 69.)

Apr. 20. Mon. Weather cloudy. We heard that the newly-married. Dr. Petch and Alice, were to be at home yesterday, so we supposed we might see them today, and this morn Hannah and I sent them a bed comforter as a wedding gift, but her mother told Celeste that they passed through town yesterday in their auto and stopped at home only about an hour, going on to their hospital at LaMoine. So we were disappointed Laura called today A race of aviators had been announced from San Francisco to Bakersfield by way of Stockton, and Weldon Cooke was one of the entrants, but the weather at San Francisco proved to be so windy and foggy that only six of the fifteen entered started and only a part of them went through - others came to grief, and Weldon would not start at all. A man by name Christofferson won the race. Wrote to Eureka. (T.S.R. 52. 2 P.M. 66. S.S. 60.)

Apr. 21. Tues. There was a shower in early morn and the day was partly cloudy. Have written to Ada. The State S.S. Convention opens at Woodland