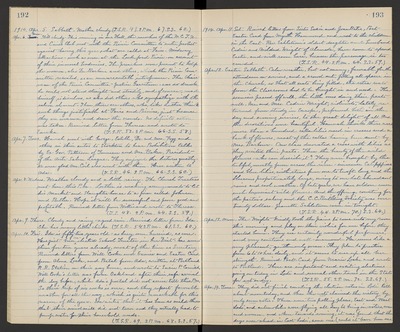 Apr. 6. Mon. Still cloudy. This evening in our Hall, the members of the W.C.T.U. and Civics Club met with the Picnic Committee to enter protest against having this year, what are called sat Fairs. Midway attraction - such as were at the Lockeford Picnic - on account of their immoral tendencies. The preachers were present to help the women, also Dr. Barbour and others, which the Picnic Committee resented, as an unwarrantable interference. The Chairman of the Picnic Committee - Justice Garretson was so drunk he could not stand straight and steadily and of course, made himself ridiculous, as also did others who sympathize with the saloon element. Then there are others, who, like Luther think such things justifiable at Fairs and Picnics, just because they are common and draw the crowds. No definite action was taken. Received letter from Theresa and wrote to Eureka. (T.S.R. 52. 2 P.M. 66. S.S. 58.)

Apr. 7. Tues. Hannah with George, Estelle, Dr. and Mrs. Fogg and others in their autos to Stockton to hear Prohibition talks by Ex. Gov. Patterson of Tennessee and Mr. Baker, President of the Anti-Saloon League. They enjoyed the lectures greatly. He were glad Mr. Coil also went with them. Have written to Ada. (T.S.R. 46. 2 P.M. 66. S.S. 60.)

Apr. 8. Wednes. Weather cloudy and a little rainy. The Church Trustees met here this P.M. Luther is making arrangements to let his Market and Slaughter-house to a [?] called Johnson and Butler. Hope it will be successful and prove good and profitable. Received letter from Willie and wrote to Theresa. (T.S.R. 48. 2 P.M. 64. S.S. 59.)

Apr. 10. Fri. Ida is fifty-two years old - as busy even hurried, as ever. Has just been re-elected School Trustee in her Dist. has served them for ten years already, most of the time as Secretary. Received letters from Will Cooke and Eunice and Easter Card from Alma Locke, and Postal from Ada, written at Portland R.R. Station on their way home, and wrote to Susie P. Cornish. Will Cooke's letter was from Oakland after their safe arrival the day before, while Ada's postal did not arrive till this P.M. So their trip of six weeks is over, and they report favorable weather for all the way, which is quite remarkable for this season of the year. Ida writes that it has been so mild there that their wind mill did not turn and they actually had to pump water for their household needs. (T.S.R. 49. 2 P.M. 68. S.S. 57.)

1914. Apr. 11. Sat. Received letters from Sister Susie and Joan Bates, Post Easter Card from Myrtle Hammond and wrote to the children in the East. Rev. Sahlstrom's eldest daughter and husband Cedric and Mildred Wright of Alamada, have come to spend Easter, and will room here, because the parsonage is too crowded. (T.S.R. 44. 2 P.M. 64. S.S. 59.)

Apr. 12. Easter Sabbath. Calver weather, but not sunny, favorable for the attendance on services, and a crowd out, filling all spaces in the Church, so that all seats being filled, the extra seats from the Classrooms had to be brought in and used. The exercises passed off well, the little ones doing their parts well. Mr. and Mrs. Cedric Wright; violinists, lately returned from study in Europe, performed both in the day and evening services, to the great delight of all. And the decorations were beautiful. Hannah thinks there were more than a hundred calla lilies used in crosses and a bank of flowers, most of the callas having been sent by Mrs. Barbour. One class decorated a cross with lilies as they recited their parts. Then the beauty of the wild flowers - who can describe it? They were brought by the tubful, mostly from across the river - immense Cal. poppies and blue lilies, with stems from one to two ft. long and the blossoms proportionately large, owing to our late abundant rains and cool weather. Of late years, we have seldom run such luxuriant wild flowers. And the offering, counting for the pastor-s salary and the C.C. Building Society was over twenty dollars. Jeanette Sahlstrom came in tonight. (T.S.R. 44. 4 P.M. 70. S.S. 64.)

Apr. 13. Mon. The Wright kindly took the pains to come into my room this morning and play on their violins for me before they started home. They are certainly wonderful performers, and very courteous and well-mannered. He seems like a very pleasant, gentlemanly man. They plan to practice from 6 to 10 hrs daily, and it seems to use up all her strength. Received Post-Card from Marie Locke and wrote to Portland. These are important and exciting elections going on today in Lodi and several other towns in the State for wet or dry. (T.S.R. 55. 2 P.M. 72. S.S. 69.)

Apr. 14. Tues. They did not finish counting the election votes in Lodi till about noon today, and then the wets claimed the victory by only seven votes. There were two polling places, East and West Lodi, and Automobiles were flying all day to being in voters, men and women, and where towards evening, it was found that the days were ahead in East Lodi, someone (could it have been one