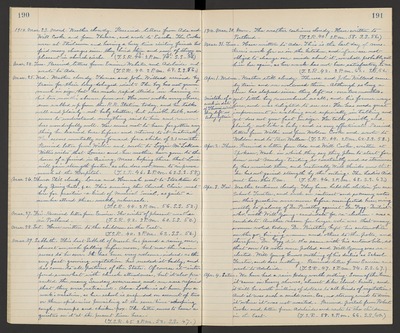 1914. Mar. 23. Mond. Weather cloudy. Received letters from Ada and Will Cooke and from Theresa, and wrote to Eureka. The Cookes were at Steilacoom and having a busy time visiting friends but find many changes since they lived there and some of them on pleasant in church circles. (T.S.R. 52. 2 P.M. 61. S.S. 56.)

Mar. 25. Wed. Weather cloudy. Theresa and John Willard arrived by train for their long-delayed visit. The boy has not grown much in size, but has made rapid strides in learning in his two month's absence from us. He now walks everywhere, even walked up from the R.R. Station today, and he talks well and plainly - not baby chatter, but sensible talk, and seems to understand everything, said to him and remembers wonderfully well. He seems not to have forgotten any thing he learned here before and returns to it naturally. He seems mentally very forward for a child of 21 months. Received letter from Willie and wrote to Lizzie McLellan. Willie writes that Louise and her Mother have gone to the house of a friend in Quincy, Mass. hoping there that Louise will gain strength faster, as she does not seem to improve much at the Hospital. (T.S.R. 46. 2 P.M. 62. S.S. 53.)

Mar. 26. Thurs. Still cloudy. Laura and Hannah went to Stockton to buy Spring hats, x.c. This evening the Church Choir met here for practice a kind of Musical Social, as quite a member attend these weekly rehearsals. (T.S.R. 44. 2 P.M. 56. S.S. 52.)

Mar. 29. Sabbath. This last Sabbath of March had proved a rainy one, almost an inch falling before noon, but now the rain seems to be over. It has been very welcome indeed as the very fast-growing vegetation has needed it badly, and has come to all portions of the State. Of course it interfered somewhat with church attendance, but it also prevented the many Sunday excursions, and we were rejoiced that they were restrained. Alma Locke is at home for a week's vacation, as her school is suspended on account of two or three epidemics prevailing at the same time - whooping cough, mumps and chicken-pox. The latter seems to have a quietus on it at the present time here. (T.S.R. 45. 2 P.M. 52. S.S. 47.)

Apr. 1. Wednes. Weather still cloudy. Theresa and John Willard came by train and we welcomed them. Although so long a time has elapsed since they left us - over two months. yet little boy remembered us all, and his former ways here, and was delighted to see us. He has made great improvement in walking and especially in talking and yet does not grow fast in size. He talks sensibly and plainly - not like a baby - and is very affectionate. Received letters from Willie and from Weldon Cooke and wrote to Weldon and to Rev. Wallace. (T.S.R. 44. 2 P.M. 62. S.S. 58.)

Mistake of a week in date of Theresa's visit they left us today by train.

Apr. 2. Thurs. Received a letter from Ada and Will Cooke, written at Spokane, Wash. in which they say they plan to start for home next Monday. Visiting so constantly and so strenuous by has wearied them, and naturally Will thinks now that he has not gained strength by the outing. The Ladies Aid met here this P.M. (T.S.R. 46. 2 P.M. 68. S.S. 63.)

Apr. 3. Fri. Weather continues cloudy. They have held the election for one School Trustee, and such an interest and so many votes on this question were never before manifested here, owing mostly to jealousy of Dr. Priestley against Dr. Fogg - Dentist - who, with Will Young - candidate for re-election was a candidate. Another reason for larger vote was that many women voted today. Dr. Priestley kept his automobile on the go, bringing women and others to the polls, and therefore, Dr. Fogg did the same with his automobile, so that over 150 votes were polled and Will Young was re-elected. Will Young knows nothing of his duties as School Trustee, and does nothing. Received letter from Eunice and wrote to Adelaide. (T.S.R. 47. 2 P.M. 74. S.S. 67.)

Apr. 4. Satur. We have had a rain today worth voting. Some of the time it came in heavy showers, almost like cloud-bursts, and it will be worth millions of dollars to all kinds of vegetation. And it was such a mild rain, too, no stormy wind to drive it where it was not wanted. Received postal from Robert Cooke and letter from Adelaide and wrote to the children in the East. (T.S.R. 58. 2 P.M. 66. S.S. 60.)