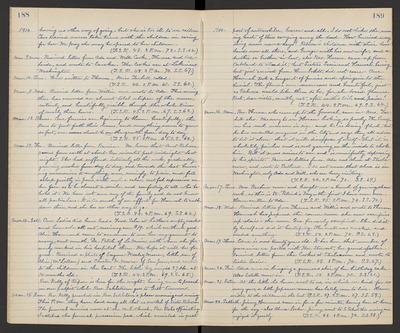 Mar. 11. Wed. Received letter from Willie and wrote to Ada. This evening there has occurred an almost total eclipse of the moon, entirely and beautifully visible through the whole time of nearly three hours. (T.S.R. 45. 2 P.M. 67. S.S. 62.)

Mar. 13. Fri. Received letter from Eunice. We learn that Aunt Rebecca passed from earth at about ten minutes past midnight last night. She had suffered intensely all the week, gradually growing weaker from day to day, and towards the last becoming unconscious to everything even, seemingly, to pain, and fell asleep quietly in Jesus, with such a calm, restful expression on her face as to be almost a smile, and comforting to all who behold it. We have not seen any of the family and do not know all particulars. It is too much of an effort for Hannah to walk down there, and she has no other way to go. (T.S.R. 44. 2 P.M. 69. S.S. 64.)

Mar. 14. Sat. Our Ladies Aid have had a Food Sale at Luther's empty market and have sold all out, receiving over $19. which we think good. Alice Hammond came to announce to me her engagement to marry, next month, Dr. Petch of LaMoine, with whom she formerly worked in his hospital there. We hope it will be for good. Received a photo of Eugene Wesley Moore, little son of Alice (McLellan) and Chester W. Moore of San Jose, and wrote to the children in the East. The little boy weighs 27 lbs. at 14 months old. (T.S.R. 44. 2 P.M. 69. S.S. 65.) Rev. Kelly of Ripon is here for the night, having come to preach in our pulpit while Rev. Sahlstrom goes to Galt tomorrow.

Mar. 15. Sun. Rev. Kelly preached in Rev. Sahlstrom's place morning and evening. This P.M. they have laid away all that is mortal of Sister Rebecca. The funeral services were at the M.E. Church, Rev. Bates officiating. I watched the funeral procession pass, which consisted in great

1914. part of automobiles, hearse and all, I do not like the seeming haste of thus carrying away the dead. How hurried every thing seems nowadays! Rebecca's children with their husbands were all there, and George with his new wife, and a brother or brother-in-law, also Bro. Horace came up from Oakland to attend it, but Sisters Susie and Hannah, having but just arrived from Humboldt, did not come. Our Hannah took a bouquet of fuchsias and springarie to the burial. The flowers were numerous and beautiful, just as Rebecca would like them to be, for she loved flowers. Rest, dear sister, sweetly rest, after earth's toil and pains! (T.S.R. 44. 2 P.M. 69. S.S. 64.)

Mar. 16. Mon. Bro. Horace, who came up to the funeral, came in Mrs. Tarbell also. Was sorry to see Horace looking so poorly. The lump on his neck increases in size and he is losing flash, but he has consulted surgeons in the City and says they all advice to let it alone that it will disappear of itself that it is absolutely painless and is not growing on the inside to choke him. But it seems serious to one and is manifestly depressing to his spirits. Received letters from Ada and Alma at Steilacoom, and wrote to Portland. I do not mean that alma is in Washington, only Ada and Will, who are busy visiting. (T.S.R. 44. 2 P.M. 72. S.S. 69.)

Mar. 18. Wed. Received letters from Theresa and Willie and wrote to Theresa. Hannah has prepared the corner room she now occupies up-stairs - the room Geo. formerly occupied. She did it by herself and did it beautifully. The wall was cracked and needed something. (T.S.R. 50. 2 P.M. 74. S.S. 68.)