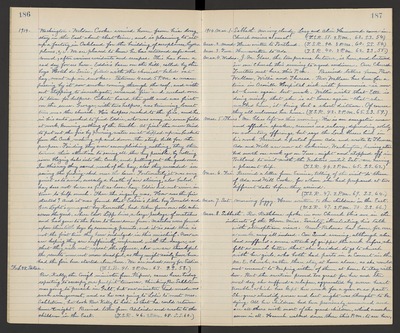 1914. Washington. Weldon Cooke arrived home from his long stay in the East about that time and is planning to set up a factory in Oakland for the building of aeroplanes, hydroplanes, x.c. We are pleased to know he has returned safe and sound, after various accident and escapes. This has been a sad day for us here. Eddie's barn on the hill, called by the boys "Hotel de Sonic," filled with the choicest baled oat hay, went up in smoke. Between 4 and 5 P.M. a man passing by it saw smoke coming through the roof, and with out stopping to investigate, screamed "fire" and rushed over to town for helpers. Celeste heard the yell and was first on the scene. George, with two helpers, was trimming locust trees near the church. His helpers rushed to the fire, and he in his auto rushed to find Eddie, who was away in some field at work, knowing nothing of the trouble. At first the men tried to put out the fire by pouring water on it dipped up in buckets from the Creek, rushing up and down the steep hill for the purpose. Finding they were accomplishing nothing, they then turned their attention to saving all the hay possible, by rolling some blazing bales into the Creek, and pulling out the good ones. In this way they saved much of the hay, also they succeeded in saving the feeding shed near the barn. Fortunately it was very quiet as to wind, scarcely a breath of air stirring, also baled hay does not burn as fast as loose hay. Eddie did not arrive in time to help much. Then the inquiry was, How was the fire started? And it was found that Eddie's little boy Donald and Geo. Light's youngest boy Kenneth, had taken from our old cabin across the yard, where Edw. Lipp lives, a large package of matches and had gone to the barn to have some fun. Matches were found upon these little boys by sorrowing parents, and it is said this is not the first time they here indulged in this mischief. Now we are hoping they are sufficiently impressed with the danger, so that they will not repeat the offence, also we are thankful the results were not more dreadful, as they might easily have been had the fire been started elsewhere. We are indeed sorry for Eddie.

Rev. Kelly, the Cong'l minister from Ripon, came here today expecting to occupy our pulpit tomorrow, thinking Rev. Sahlstrom was going to preach in Galt, but our minister had made no such arrangement, and as he was going to Lodi to meet Mrs. Sahlstrom, he took Rev. Kelly to Lodi so that he could return home tonight. Received letter from Adelaide and Wrote to the children in the East. (T.S.R. 46. 2 P.M. 68. S.S. 60.)

Mar. 4. Wednes. J.M. Glass, the temperance lecturer, is here and lectured in our Church this evening to a good audience. Our Church Trustees met here this P.M. Received letters from Rev. Wallace, Willie and Theresa. Rev. Wallace has been for a time in Oraville Hospital sick with pneumonia is now at home again but weak. Willie writes that Etta is doing nicely, that she is at home again that she walked home, it being but a short distance. Of course they all welcomed her home. (T.S.R. 42. 2 P.M. 65. S.S. 59.)

Mar. 5. Thurs. Mr. Glass left us this morning. He is an energetic man and effective speaker, receives no salary, depending solely on voluntary offerings, but says the Lord blesses him in his work. Received a postal from Ada and wrote to Theresa. Ada and Will are now at Lakeview, Washington, having started north one week ago on Tues. night and stopped off in Portland to visit with the Webster until Sat. are having a pleasant trip. (T.S.R. 44. 2 P.M. 65. S.S. 62.)

Mar. 8. Sabbath. Rev. Rathbone spoke in our Church this we in the interest of the Home Miss. Society, illustrating his talk with stereopticon views. Aunt Rebecca has been, for over a week, very ill indeed. On Sund, evening, although she had suffered a severe attack of grippe the week before, she felt so much better that she decided to go to church with her girls, who both had parts in a Concert in the M.E. Church, rather than stay at home alone, as she would not consent to keeping either of them at home to stay with her. But the exertion proud too great for her and the next day she suffered a relapse, aggravated by severe heart trouble, which has kept her weak for a year or so past. She grew steadily worse and last night was through to be dying. All her children had been previously summoned and are all there with most of the grand children, which member seven in all. Hannah walked down there this P.M. to see her,