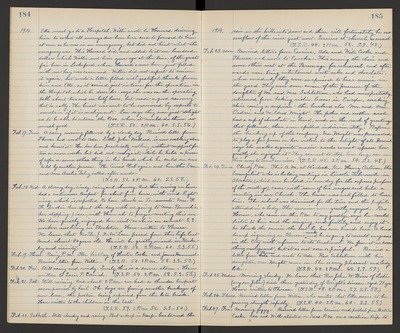 1914. Etta must go to a Hospital, Willie wrote to Howard desiring him to collect all moneys due him here and to forward to him at once as he was in an emergency, but did not hint what the emergency was. This Howard did, and added to it one hundred dollars which Willie sent him years ago at the time of the great fire here in Lockeford, when Howard's new barn just filled with new hay was consumed. Willie did not expect to received it again, but wrote a letter filled with grateful thanks from him and Etta, as it arrived just in time for the operation in the Hospital, which he describes - says she was on the operating table about two and one-half hours, but made a good recovery that is, rally. The breast was sent to be examined by experts to ascertain if it is malignant. Lou says they were just delighted to be able to return the $100. when it would do them so much good. (T.S.R. 50. 2 P.M. 60. S.S. 56.)

Feb. 17. Tues. A rainy morning followed by a cloudy day. Received letter from Theresa and wrote to Ada. Little John Willard in now walking alone and knows it. He has been practically walking without support for two or more weeks but did not realize it, while he held a piece of rope or some other thing in his hands which he could see was held by another person. The Civics Club again met here this P.M. and Mrs. Amelia Daley called afterwards. (T.S.R. 51. 2 P.M. 60. S.S. 58.)

Feb. 18. Wed. A stormy day, windy, rainy and showery. And this evening we have had a continuous tempest for about five hours, with vivid lightning, which is reported to have struck in Sacramento. Mrs. F.F. Dustin has spent the day with us, going to Mrs. Bruml's, her stopping-place, with Hannah to prayer meeting this we. He have greatly enjoyed her visit, as she is an earnest S.S. worker, now living in Stockton. Have written to Theresa. We learn that Rev. Dr. J.K. McLean passed from this life last Mond. almost 80 years old. He will be greatly missed in Berkeley and vicinity. (T.S.R. 52. 2 P.M. 60. S.S. 55.)

Feb. 22. Sabbath. Still cloudy and rainy. But a drop in temp. has turned the

Feb. 23. Mond. Received letters from Eunice, Ada and Will Cooke and Theresa and wrote to Eureka. This evening the choir and some others met at the Parsonage for rehearsal, and after wards were being entertained with cake and chocolate, when suddenly they were surprised to hear music in the yard. They were soon aware of the preserve of the daughter of Mr. and Mrs. Sahlstrom, who had unexpectedly returned from taking violin lessons in Europe, making their coming a surprise - the husband also. Mr. and Mrs. Cedric and Mildred Wright. The father and mother each had a cup of chocolate in hand, and in the rush of greetings that followed, these were spilled indiscriminately. Before the breaking up of the company. Mrs. Wright was persuaded to play a few pieces on her violin, to the delight of all. Hannah says she makes exquisite music - words cannot express hoe greatly she enjoyed it. They are not to stop here long, are on their way to San Francisco. (T.S.R. 45. 2 P.M. 54. S.S. 48.)

Feb. 24. Tues. Cloudy P.M. This A.M. at 10 o'clock, Rev. Henry Ostrom, the Evangelist who is holding meetings in Lincoln Tabernacle in Stockton, (which was builded in one day for the express purpose of the meetings), came with some of his singers and held a meeting in our Church. The house was well filled to hear him. The school was dismissed for the time and the pupils attended in a body. The exercises were greatly enjoyed. Bro. Horace, who came in this P.M. to say goodbye, says he could listen to him and the singing indefinitely and enjoy it - he thinks the music the best he has ever heard here. A hard lump is growing on Horace's neck and he is going to consult surgeons in the City with reference to its treatment. We fear it is something malignant, but it is not sore or painful. Received a letter from Theresa and wrote to Ada. Rev. Sahlstrom with his daughter, Mrs. Wright came in. She is very pleasant and lady like. (T.S.R. 2 P.M. 62. S.S. 57.)

Feb. 27. Fri. Morning foggy. Received letter from Eunice and postal from Hester Cooke. Ada and Will started on Tues. P.M. on a vacation trip to