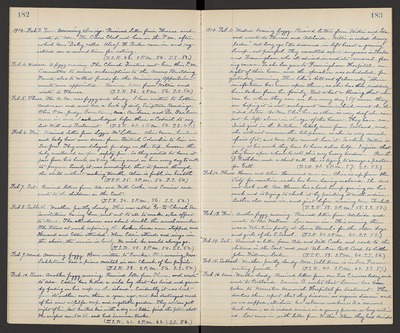 Feb. 4. Wednes. A foggy morning. The Church Trustees met here this P.M. Committees to secure subscriptions to the Annex Building Friend, also to collect funds for the missionary apportionments were appointed. Received letter from Willie and wrote to Theresa. (T.S.R. 36. 2 P.M. 56. S.S. 50.)

Feb. 5. Thurs. The A.M. was foggy and cloudy. I have written to Lottie Anderson and sent her a book of daily Scripture Readings. This P.M. Judge Garretson, Mr. Ambrose and Dr. Barbour came in and I acknowledged before them a Codicil to my last Will and Testament. (T.S.R. 41. 2 P.M. 50. S.S. 49.)

Feb. 6. Fri. Received letter from Lizzie McLellan. Alice Moore, husband and baby have come down from British Columbia to live in San Jose. They were delayed for days on the trip, because the baby swallowed an open safety pin. So they waited to have it pass from his bowels, an X-ray being used on him every day to note its progress. Surely it was wonderful that it passed through the child without making trouble. Alice is feeble in health. (T.S.R. 35. 2 P.M. 52. S.S. 50.)

Feb. 8. Sabbath. Weather partly cloudy. This was called "Go-To-Church" Sun. invitations having been sent out to all to make extra effort to attend. The attendance was about double the usual member. The teams at work repairing the broken lever were stopped and Howard and Eddie attended. When Eddie attends and sing in the choir, the music is lovely. We wish he would always go. (T.S.R. 42. 2 P.M. 54. S.S. 52.)

Feb. 10. Tues. Another foggy morning. Received letter from Theresa and wrote to Ada. Eddie has killed a wild hog that has lived and grown by feeding on his crops on the island. Evidently it was lost from its mother more than a year ago, and has destroyed much of his new alfalfa crop and vegetable garden. They seldom got sight of him, but hunted him with a dog and Eddie fired the fatal shot. He weighted over 500 lbs, and had immune tusks. (T.S.R. 41. 2 P.M. 62.) S.S. 56.)

1914. Feb. 11. Wednes. Morning foggy. Received letters from Willie and Ida and wrote to Theresa and Adelaide. Willie is indeed "heavy laden." Not long ago Etta discovered in left breast a growing lump, not painful. They consulted expert surgeons in Boston and Framingham, also all advised immediate removal, fearing cancer. So she has gone to Framingham Hospital, in sight of their home, and the operation was scheduled for yesterday morning. Thus like "a bolt out of clear sky" their misfortune has come upon them, as she has their suddenly been taken from her family. But what a blessing that she can be where they can see her ever day! Of course they are hoping it is not malignant cancer, which must be decided later. As Mrs. Ober, her no other, is very deaf she cannot be left alone in charge of the house. They have an Irish girl in the kitchen, lately come from Ireland, and she will not answer the telephone, as she is very much afraid of it, and Mrs. Ober cannot hear it. So while Willie is away at his work, they have to have extra help. I rejoice that they know upon whom to roll this very heavy burden. Rev. L.D. Rathbone made a short call. He is trying to arrange a pastor for Galt. (T.S.R. 41. 2 P.M. 57. S.S. 53.)

Feb. 12. Thurs. Horace and Alice Hammond came in. Alice is up from the City for vacation, as she has been having malaria. She does not look well. Bro. Horace had a hard lump growing on his neck and is trying check it by painting it with iodine. Luther also came in, and just before evening Mrs. Tarbell. (T.S.R. 38. 2 P.M. 58. S.S. 53.)

Feb. 16. Mon. Weather cloudy. Received letters from our two Eunice today and wrote to Portland. Eunice C. writes that Louise has been taken to Worcester Memorial Hospital for treatment. The doctors there report that they discover "no organic disease" and so we suppose, attribute her extreme weakness to a "nervous break-down, as is indeed serious in a young person, so long continued. Lou came in with letter from Willie. When they had decided