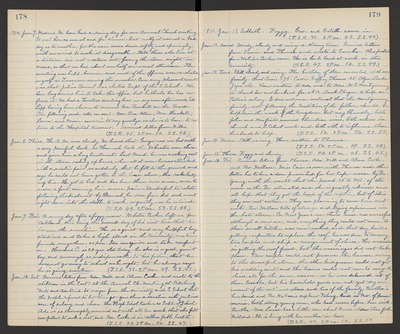 1914. Jan. 7. Wednes. We have had a rainy day for our Annual Church meeting. It met here as usual and for dinner. But really it was not a bad day as to weather, for the rain came down safety and sparingly, with no wind to make it disagreeable. Still those who live at a distance did not venture out, fearing the storm might increase, so that we had about one half our usual attendance. The meeting was held, however, and most of the officers were re-elected myself as Treasurer among the number. Once very pleasant result was that Julius Bruml was elected Supt. of the S. School. We have long desired him to take this office, but hitherto he has refused it. We had a Trustees meeting here in my room afterwards, Ed. Lipp having been chosen to succeed Mr. Burkett on the Board. The following made calls on me: - Mrs. Ora Allen, Mrs. Haskell, Laura, and Marie came in to say goodbye, as she is to leave to return to the Hospital tomorrow. Received letter from Willie. (T.S.R. 45. 2 P.M. 50. S.S. 48.)

Jan. 8. Thurs. The A.M. was cloudy. We heard that George was in bed with a very painful back, so Hannah took the Vibrator over there and gave him a long treatment. Last mond. he was working out in the storm raking up leaves, when all at once he was attacked with a sciatic pain so suddenly that he fell to the ground and says he could not have gotten to the house alone, the rake helping him. He got to bed and has been there were since, even to move a foot causing him severe pain. Wonderful to relate following the treatment by Hannah, he rose from bed and went right down into the stable to work, so greatly was he relieved. (T.S.R. 44. 2 P.M. 52. S.S. 48.)

Jan. 9. Fri. A sunny day after a foggy morn. Webster Parker left us for Oakland, this being the second day of his visit here that he has seen the sunshine. He is a quiet and very helpful boy, studious, and takes a high stand in the University, making friends everywhere, as son Ida can rejoice and take comfort in. Howard C. is 20 yrs. old today - he also is a good, quiet boy, and seemingly so indispensable to his father, that he does not go away to school as he ought, but he always says he is going, sometime. (T.S.R. 31. 2 P.M. 49. S.S. 47.)

Jan. 10. Sat. Received letters from Ada, Will and Alma Cooke and wrote to the children in the East. at the Annual Ch. meeting at Pittsburg Will and Ada tried to resign from the ministry and S. School but the people refused to let then go - gave them a vacation with continuance of salary, and chose the High School teacher as Supt. of S. School. Ada is so thoroughly wearied out with all her work what she felt Compelled to seek a rest, and Mr. Cooke is in rather feeble health. (T.S.R. 33. 2 P.M. 50. S.S. 47.)

Jan. 13 Tues. Still cloudy and rainy. The birthday of three connected with Oar family. Aunt Susie - 75 - Carrie Geffroy Thomas - 45 - Olga Locke - 7 yrs. old. Have written to Ada and to Mrs. W.S. Montgomery to thank her and husband for a $12. Bank Cheque to help on Pastor's salary. It does not seem natural that the Montgomery family, not following the tradition of the father, should be helpers in the work of the Kingdom, but very blessedly, both John and Winfield married Christian wives, both active in church and S. School work and both able to influence their husbands to help. (T.S.R. 50. 2 P.M. 56. S.S. 55.)

Jan. 16. Fri. Received letters from Theresa, Ada, Will and Alma Cooke and Rev. Wallace. Miss Cain is now with Theresa and the latter has taken a dose prescribed for her tape-worm by Dr. Young, with the result that she passed 25 to 30 ft. of the worm, as the Dr. estimated, and she is greatly relieved and all hope that they got the head of the reptile, but of this they are not certain. They are planning to come here next week. Rev. Wallace tells of strange and trying experiences in the late storm. On New Year's eve their house was unroofed although a new one, and everything they could not move to their small kitchen was rain-soaked, and that day, besides getting carpenters to replace the roof, he was due to marry two couples, and ship a consignment of olives. He succeeded in getting the roof fixed, but the marriages did not take place. One couple could not procure the license, owing to the dreadful storm, the other bridegroom could not get his wedding suit, and the trains could not run to carry the olives, all for the same reason - so he was delivered out of those troubles, but his household goods are not yet dry on account of the continued storm, and two of the family, Bertha's husband and Rev. Wallace's nephew Volney, Died on Nov. of pneumonia, both strong young men, who had nurses before been sick. Bertha - Mrs. Lucas - has a little one about 3 mos. older than John Willard. She is living with her mother in law. (T.S.R. 40. 2 P.M. 54. S.S. 50)