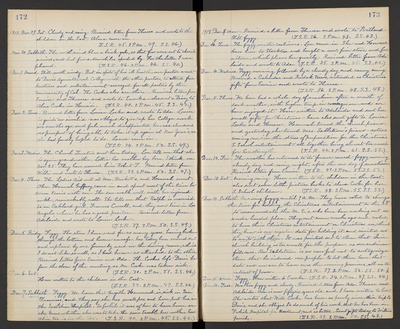 Dec. 1. Mond. Still north windy. But in spite of his ill health, our pastor went to Davis Agricultural College with the other pastors, to attend free lectures and entertainment arranged for all pastors by the University of Cal. The Cookes also are there. Received letters from Eunice and Theresa and wrote to Eureka also sent a Diary to Alma Cooke in Hawaii. (T.S.R. 40. 2 P.M. 45. S.S. 42.)

Dec. 2. Tues. Received letter from Louise Locke and wrote to Ada. Louise is quite an invalid was obliged to give up her College work six months ago, and feels much disappointed because she sees. no prospect of being able to take it up again at New Year's, as she had fondly hoped to do. Laura came in. (T.S.R. 34. 2 P.M. 52. S.S. 49.)

Dec. 4. Thurs. The Ladies Aid met at Mrs. Burkett's, and Hannah went. Then Hannah Geffroy came in and spent most of the time between trains with me. She can walk well with her injured ankle, remarkably well. She tells me that Ralph is married to an Oakland girl, Frances Carroll, and they now live in Los Angeles, where he has a good position. Received letter from Adelaide and wrote to Louise Locke. (T.S.R. 37. 2 P.M. 50. S.S. 49.)

Dec. 5. Friday. Foggy. The stove I have used for so many years, having broken through the bottom and become unsafe, has today been moved out and replaced by one formerly used in the dining room, which I do not like so well, as I had become so attached to the other. Received letters from Eunice and Ada. The Cookes left Davis before the close of the meeting, as Mr. Cooke was taken sick. (T.S.R. 30. 2 P.M. 51. S.S. 46.)

Dec. 7. Sabbath. Foggy. We learn that Myrtle Hammond is sick in San Francisco, and they say she has small pox and have put her in the Isolation Hospital. So foolish it was of her to have home [?] she knew whether she was to take the same trouble her mother had Alice, too, is in the City. (T.S.R. 40. 2 P.M. 45. S.S. 42.)

Dec. 9. Tues. The foggy weather continues. Lou came in. She and Howard have been to Stockton and bought a new, fine stove and furniture, which pleases her greatly. Received letter from Adelaide and wrote to Ada. (T.S.R. 35. 2 P.M. 45. S.S. 42.)

Dec. 11. Thurs. We have had a whole day of sunshine after a month of dark weather, with higher temp. in consequence, and we have enjoyed it. Have written to Adelaide, and sent her small gifts for Christmas, have also sent gifts to Louise Locke and Horace. Hannah tuned the church piano and yesterday she tuned Mrs. Sahlstrom's piano extras coming now in the stress of preparation for the Christmas S. School entertainment all together being almost too much for her strength. (T.S.R. 44. 2 P.M. 61. S.S. 55.)

Dec. 14. Sabbath. Morning foggy until 9 A.M. They have voted to change the time for holding the Christmas entertainment to the 23rd to accommodate the M.E.'s, who have been working out an under-handed plan. They, met some weeks ago and voted. to have their Christmas entertainment on Christmas eve, which they know is our regular date for holding it, and invited us to unite with them. It was pointed out to them that their church building is too small for the purpose, as our audience fills ours. Rev. Sahlstrom is so careful not to antagonize them that he induced our people to let them have that date and we are to have ours the evening previous, all in the interest of peace. (T.S.R. 37. 2 P.M. 52. S.S. 50.)

Dec. 16. Tues. Weather foggy and cloudy. Received letters from Ada, Theresa and Adelaide. Ada is now fifty six years old and I have written to her. She writes that Will Cooke has been so poorly since their trip to Davis, and she obliged to do much of his work, that he has been in Fabiola Hospital for treatment, and is better. Sent gifts today to William's family. (T.S.R. 39. 2 P.M. 50. S.S. 48.)