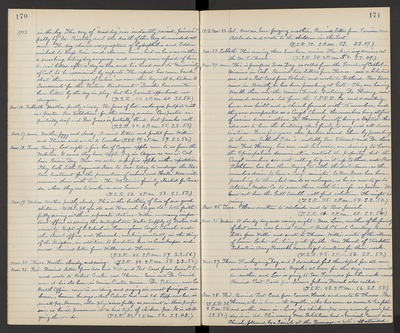 1913. in the leg. The cry of "mad dog" was instantly raised, principally by Dr. Priestley and the death of the dog demanded at once. The dog showed no symptoms of hydrophobia and Eddie wished to keep him and observe him, but as he was rather as snarling, biting dog anyway and many were afraid of him he was killed after a day or two, and his head sent to University of Cal. to be examined by experts. The report has come back that "there were signs of rabies," so now the boy will be taken to Sacramento for the Pasteur treatment. Donald has sometimes been bitten by the dog in play, but his parents apprehend no danger. (T.S.R. 41. 2 P.M. 60. S.S. 56.)

Nov. 18. Tues. Rainy. Last night a fine box of Oregon apples came to us from the Webster. It seems they have Apple Day in Oregon as we in Cal. have Raisin Day. There are extra superfine apples with a reputation. They took little Raymond Kerr to Sac. today to undergo the Pasteur treatment for the prevention of rabies, and Kattie Kerr will remain there with him. The Whitmeier Family started for Canada, where they are to make a new home. (T.S.R. 50. 2 P.M. 52. S.S. 53.)

Nov. 19. Wednes. Weather partly cloudy. This is the birthday of two of our good children, Willie, 48 yrs. old and Hannah 46 yrs. old, both faithfully serving in their separate stations. Willie, in many important offices as serving the Metropolitan Water Supply of Boston and vicinity, Supt. of S. School in Framingham Cong'l Church and other church offices, and Hannah, working constantly in the things of the Kingdom, in addition to her duties here as housekeeper and nurse. Received letter from Willie and Theresa. (T.S.R. 45. 2 P.M. 59. S.S. 56.)

Nov. 21. Fri. Received letters from Ada and Will and Post-Card from Susie P.C. and wrote to Robert Cooke and Theresa. Susie and Dr. Cornish were at his old home in Union Center, Minn. Dr. Peterson, now Co. Health Officer, came in scolding and saying we must fumigate our house, because he says what Celeste had and Ed. Lipp now has, is small-pox. However, other physicians fully as eminent in their profession as he is, pronounce it a bad type of chicken-pox. It is still going the rounds. (T.S.R. 31. 2 P.M. 52. S.S. 48.)

Nov. 24. Mon. This is Junipers Serra Day, so called from the Founder of Catholic Missions in Cal. Received two letters from Theresa, one a belated one, and a Post-Card from Robert, and wrote to Portland. Rev. Burr came in. Recently he has been preaching at Galt. They are having trouble there over the Union Church Building. Dr. Harvey, now deceased, secured a lot from the S.P.P.R. Co, and a meeting house was built and a church formed with 15 members, and they were incorporated as a Cong'l Church, the numbers being at first of various denominations, Dr. Harvey himself being a Baptist. His idea was to have the building open freely to any and all denominations. For a few years our pastors served them by preaching to them on Sabbath P.M.'s - notably Rev. Stewart and Dr. Lane now Fred Harvey, his son, and his sister, are desiring to have the Episcopalian denomination control the property, but the Cong'l members are not willing to give it up to them, and Rev. Rathbone has been there trying to settle the disturbance, as the members desire to have a Cong'l minister. So Rev. Burr has been preaching to them, but can do so no longer, as he is now to go to Alturas, Modoc Co. to serve there, with his wife, as pastor. We know not how the Galt trouble will find solution. The night is rainy. (T.S.R. 35. 2 P.M. 54. S.S. 50.)

Nov. 26. Wednes. A cloudy and rainy night. Mrs. Linn, mother of the family of that name, was buried today at Brick Church Cemetery. Received letter from Willie and wrote to Theresa. Willie writes of the illness of Louise Locke - she being quite feeble. Mrs. Hunt of Stockton Salvation Army Barracks, came to get donations for their work. (T.S.R. 45. 2 P.M. 56. S.S. 53.)

Nov. 28. Fri. Received Post-Card from Eureka Hurd and wrote to Theresa. Bro. Horace, who is here with Myrtle, who has come as nurse her father and mother, came in. Lucy has chicken-pox very severely and John also is in bed. This evening Mrs. Sahlstrom had a musical Concert in our Church, followed by a Social at the Parsonage & both will attended. (T.S.R. 38. 2 P.M. 55. S.S. 52.)