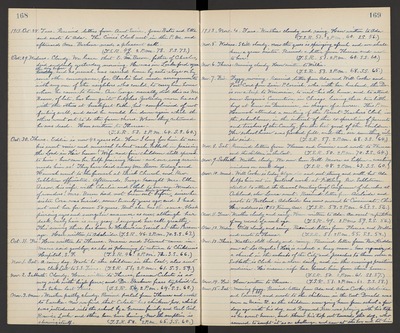 Oct. 29. Wednes. Cloudy. We learn that E.C. Bacon, father of Charles, died suddenly yesterday morning. He was in Lockeford the day before, and as usual, was carried home by acts stage or by some other conveyance, Charlie had made arrangements with any one of the neighbors who could, to carry him home when he came to town. Our George usually did this as Mr. Bacon, of late, has been quite helpless. Yesterday morn he sat with the others at breakfast table, but complained of not feeling well, and said he would lie down again while the others went out to do the farm chores. When they returned he was dead. Have written to Theresa. (T.S.R. 53. 2 P.M. 64. S.S. 60.)

Oct. 30. Thurs. Eddie is now 42 years old. How I long for him use his sweet voice and musical talent each Sabbath in praising the Lord in His home! Wife and five children still spared to him, how can he help praising Him and our song service needs him so! They have laid away Mr. Bacon today and Hannah went to the funeral at Brick Church, and Rev. Sahlstrom officiated. Afterwards, George brought Mrs. Ellen Bacon, his wife, with Charlie and Ethel to see me. Wonder of wonders! Mrs. bacon had not been out before from their ranch since her sister Cora was buried, some twenty years ago, and I had not met her for some 50 years. But she has the same, black piercing eyes and energetic manner as ever, although her dark, curly hair is very gray. I enjoyed her call greatly. This evening there has been and Halloween Social at the Parsonage. Have written to Adelaide. (T.S.R. 46. 2 P.M. 70. S.S. 63.)

Nov. 3. Mon. Weather partly cloudy. Received postal from Theresa and wrote to Eureka. Now we find that Celeste has chicken-pox, which was introduced into the school by a German family and Earl Coil. Bernice Locke and others have been having. Now the eruption is showing itself. (T.S.R. 52. 2 P.M. 65. S.S. 60.)

Nov. 7. Fri. Foggy morning. Received letter from Ada and Will Cooke and Post Card from Susie P. Cornish, who with her husband, the Dr. is on a trip to Wisconsin, to visit his old home, and to attend some Surgeon's Convention in Chicago, leaving their two little boys at home in Dunsminer, in charge of a nurse. This P.M. Hannah attended a meeting of the Parent-Teacher's Club, in the school house, in the interest of the co-operation of parents and teachers of the County, for the best good of the children. The school house was peeked full, and the air something vile she said. (T.S.R. 57. 2 P.M. 68. S.S. 64.)

Nov. 10. Mond. Will Cooke is today 61 yrs. old and not strong and well, but Ada helps him out in pastoral work at Pittsburg. Rev. Sahlstrom started to attend the Annual Meeting Cong'l Conference of churches at Oakland, also Laura went. Received letter from Adelaide and wrote to Portland. Adelaide has now moved to Cincinnati, Ohio. Her address is 1853 Kinney Ave. (T.S.R. 53. 2 P.M. 65. S.S. 56.)

Nov. 13. Thurs. Weather still cloudy and rainy. Received letter from Rev. Kidder now at Los Angeles. He is indeed a busy man, has organized a church in the suburbs of the City and preaches to them once a Sabbath, is Clerk in a store daily, and in the evenings practiced medicine. He's insane wife has barred him from their home. (T.S.R. 50. 2 P.M. 61. S.S. 57.)

Nov. 15. Sat. Morning foggy. Received letters from Ada and Alma Cooke, Adelaide and Eunice, and wrote to the children in the East. Donald was down on Main St. as the children were going home from school a few days ago with his dog, and Raymond Kerr was playing with his top as he went home, and threw his top out towards the dog, who seemed to accept it as a challenge and ran at the boy and hit him