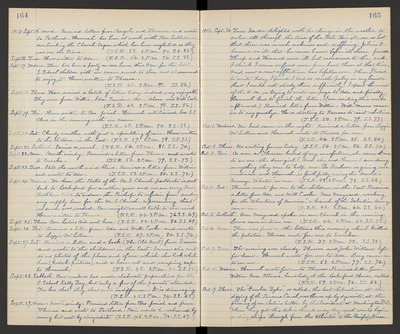 Sept. 24. Wednes. We hear the Bates of the M.E. Church pastorate is sent back to Lockeford for another year and we are sorry. Rev. Rathbone tried to induce the Bishop to refrain from sending any supply here for the M.E. Church, representing that no such was needed. One might as well talk to the wind. Have written to Theresa. (T.S.R. 44. 2 P.M. 76. S.S. 69.)

1913. Sept. 30. Tues. We are delighted with the change in the weather to cooler. All through the time of the State Fair it was so hot that there was much sickness and suffering. Julius B. became so ill that he came home before its close. James Thorp and Howard were ill but remained to the end. I think I never suffered more from heat than at that time. And now a new affliction has befallen me. When I tried to write today I found I had so much palsy in my hands that I could not steady them sufficiently. I spent the most of the A.M. in trying to write one page to Ada, and finally Hannah had to finish the letter. (I am writing this weeks afterward.) Received letter from Willie. Will Moore came in to say goodbye. He is starting to Kansas to visit relatives. (T.S.R. 50. 2 P.M. 79. S.S. 77.)

Oct. 9. Thurs. The "Gamboa Dyke," so called, the last obstruction at the digging of the Panama Canal, was blown up by dynamite, at the pressing of an electric button by the President at Washington. D.C. When they get this debris cleared away they expect soon to begin sending ships through from the Atlantic to the Pacific Ocean.